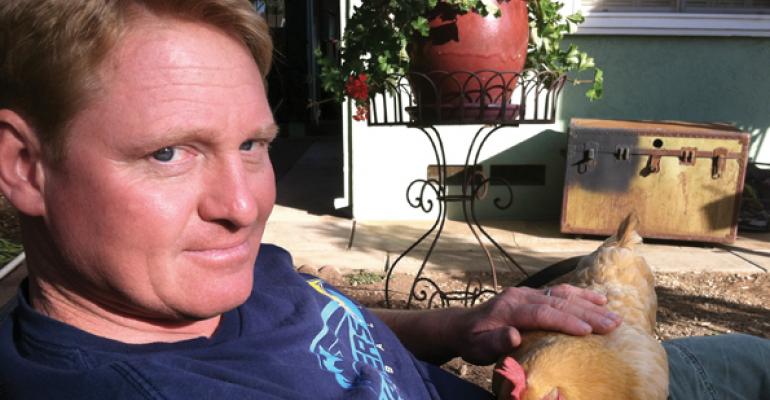 A Day in the Life with David McHugh

David McHugh grew up in Rochester, NY, but after 25 years, he’s pretty much pure Californian now, inspired by the natural beauty of his surroundings, and enjoying every busy minute of his life at the University of San Diego. “What drew me to cooking was just walking in nature,” McHugh says.

It’s true—walk with him on campus and you’ll find yourself eating cherry tomatoes, basil, kumquats and even a prickly pear that he grabs along the way.

Here’s a peek inside his day:

McHugh gets a jump on his busy day. “My nickname has always been ‘Gallo.’ I’m up with the roosters, and I can go all day. I always say, ‘I can sleep when I’m dead’—and boy, is that going to be the best nap ever,” he says. Upon waking, he grinds his own coffee for a strong jolt.

5:15 am Winter or summer, McHugh goes out to water his home garden, which is pulsating with life: aromatic herbs, five different types of chiles, four varieties of tomatoes.

5:35 am McHugh heads to his chicken coop, where his five hens start “calling out” to him when they hear his footsteps. He gives them breakfast, and in return gets a half dozen eggs.

7:00 am McHugh showers and gets on the road before San Diego traffic gets too crazy.

7:20 am Before getting into work, McHugh makes a stop at a Mexican specialty store to purchase some specialty items (torta rolls, Mexican cinnamon, chiles d’Arbol, tomatillos and more). “The purest experience for me as a chef is to pick up the food that’s fresh and then make a concept around it.”

8:30 am Troy Chapman, McHugh’s sous chef, pops into the office, wanting to get on the same page with the day’s assignments. They talk menus briefly: eggplant, pork loin, risotto, crudo… “How are we doing on salmon?” McHugh asks. “Troy knows where every piece of inventory is,” he says, proudly.

9:30 am McHugh is drafting a written communication to his crew. He writes: “…it is the responsibility of each cook to keep any area spotless and set up one’s station in the most effective manner, dating and labeling all products and storing them in the proper area.”

11:00 am Before lunch service, McHugh jumps on the line, something not every executive chef does every day, but it’s important to him to see what’s going on, and to find any weak spots or potential problems with the systems in place.

12:15 pm McHugh has brought in some of his wife’s artwork (she’s an accomplished painter) to add a backdrop to a display of the produce he found earlier. He checks out the various action stations as they are ramping up into a busy lunch rush. He slurps down a soup (his usual quick, satisfying, high-energy lunch).

1:00 pm “I run over to a meeting that was established, canceled and then re-established,” McHugh says. “This is for a big event coming up. It’ll be 275 people in the pavilion.” He gets there late and someone hands him a list of what they need, which includes four action stations and 800 shrimp.

McHugh rushes back to his office just in time to place a $10,000 order from a broadline distributor. There’s a deadline, “and it’s high stress.”

2:00 pm Performance review interviews for five staff members and then a ‘fire’ to put out involving a Dumpster that wasn’t backed up far enough, resulting in an avalanche of trash.

3:30 pm As busy as he is, McHugh takes time for a quick stroll in a beautiful canyon.

4:00 pm Meeting with staff to prepare for dinner service.

5:30 pm He cracks open a Dogfish Head IPA and prepares a Mexican feast for everyone, including his son’s friend.

10:00 pm Before bed, McHugh ends the day the way he started it, watering his garden.

One On One: Founder of hot campus concept Chick-N-Bap on business during the pandemic and a whole new kind of fast-casual fusion
Feb 26, 2021