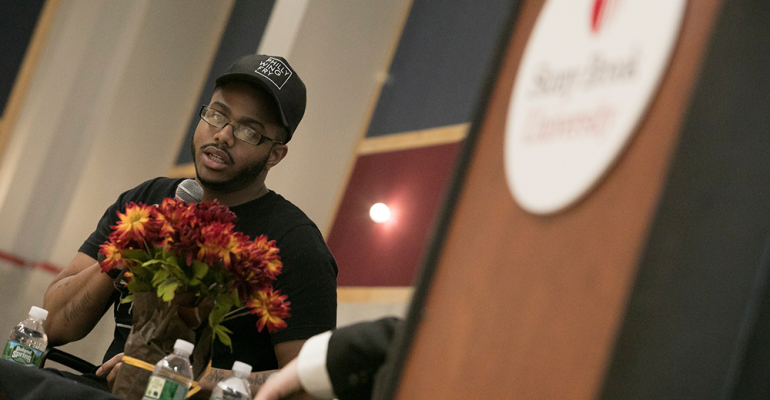 Celebrating Black History Month can be tricky for college dining programs. So one program wanted to celebrate but found a more culinary take.

Food and culture are linked so closely, it’s possible to find complex roots within a single dish, tracing the story of migrations and pathways that have survived centuries. That relationship was explored during a flavor-forward kickoff event for Black History Month at Stony Brook University in Stony Brook, N.Y.

“Today we’re going to talk about how food and culture migrate, not just from the south to the north, but from Africa to here,” Zebulon Miletsky, assistant professor of Africana Studies said to a group of about 500 who had gathered for the event.

The highlight was a presentation by Chef Kwame Onwuachi, owner of Kith and Kin, an upscale Afro-Caribbean restaurant and the fast-casual Philly Wing Fry, both in Washington, D.C. He’s also appeared on Bravo’s “Top Chef.” Recently Onwuachi was nominated for the James Beard Rising Chef of the Year award. 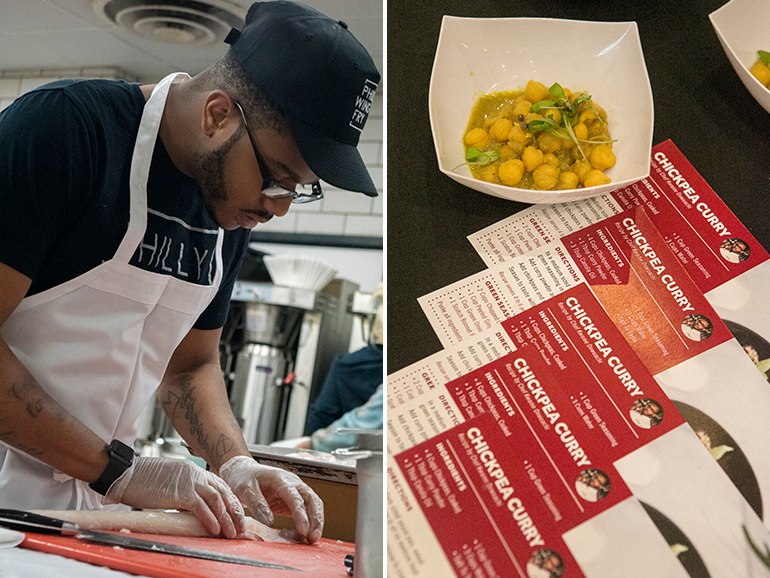 Onwuachi began by relating his own journey as an African-American chef with roots in both the Bronx and Nigeria.

“In the South Bronx, it was easy to get on the wrong path,” he said, referring to his younger years. “I was definitely going down the wrong path, and my mom wanted to get me off that path. So, I got sent to my grandparents in Nigeria and my mom told me I wasn’t coming home until I learned respect. I was there for two years.”

Those two years provided a strong culinary foundation for the future chef as well. Although Onwuachi says he didn’t fully appreciate it at the time, while in Nigeria, he unearthed the deep cultural roots of the food he grew up with—links to the past on the plate.

Now, his menus are what he calls “autobiographical.” As he was creating menus for his restaurants, Onwuachi would regularly pick up the phone and call his mom and grandparents for their input.

“This is my ‘Thanksgiving’ on a menu. Every dish should tell a story,” Onwuachi said. “You’re looking to sell a memory. Make sure what you are creating represents you. I wanted to create a menu that reflected my roots.”

For the Stony Brook event, the 500 attendees got to try Onwuachi’s take on Afro-Caribbean cuisine, braised chickpea curry. At a smaller Black History Month VIP dinner the following day for about 60 students, faculty and staff, Onwuachi shared more dishes, including gooseberries in piri piri sauce, curry nage (similar to court bouillon) and baigan choka (Trinidadian roasted eggplant). As a parting gift, attendees received a jar of grains of paradise, a signature spice of West Africa that looks like a peppercorn and is closely related to cardamom with a pungent flavor.

The year 2019 has particular significance in black history, Stony Brook’s Interim Chief Diversity Officer Jarvis Watson explained at the event. “This year’s theme is ‘Blackness is Endless,’” he said. “The start of the slave trade was 1619. We’ve survived 400 years because of the resilience of our ancestors and we celebrate 1619 because it’s the reason we’re here today. We’re here to honor those that came before us and take advantage of the opportunity to be great today.”