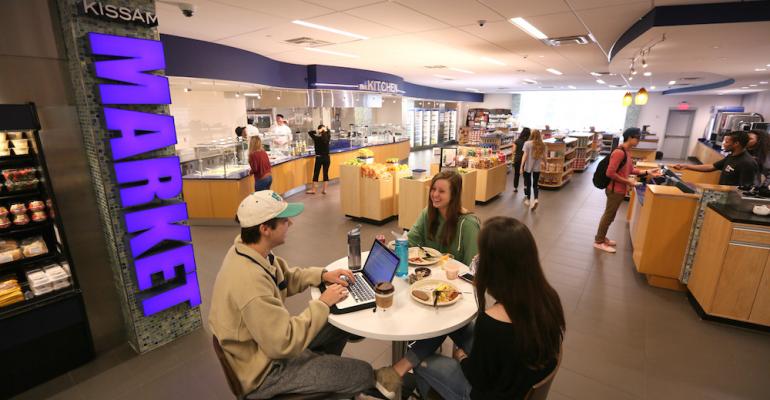 Over 650 upperclass students living in the school’s College Halls at Kissam community share two meals a day at the Market and Kitchen dining center.

Two years ago, Vanderbilt University debuted Kissam College Halls, the second phase of its College Halls residential college initiative, designed to emulate the British Oxford-Cambridge model of a communal education environment in which faculty members live with students and facilitate the learning process. Kissam consists of Warren College and Moore College, each housing 330 sophomores, juniors and seniors led by faculty directors in residence.

The two colleges are connected by a shared facility that includes a gathering space, a classroom, offices, meeting rooms and a dining facility called the Market and Kitchen, which combines a freshly prepared meal servery (the Kitchen) with a 24-hour retail venue (the Market). (Go here for a photo tour of the Kissam Kitchen and Market.)

Students dine together at breakfast and dinner at the Kitchen where in-house faculty also regularly hold house dinners and staff and residents hold special events, all intended to facilitate the idea of a community.

Students living at Kissam are required to participate in the Kissam Meal Plan, which includes a minimum of eight meals a week but is upgradable to 14 or even 19. It is a sign of Kissam’s success in fostering participation that 40 percent of Kissam students have chosen to upgrade their plans so far. As a comparison, in its final year, the food venue previously in the space now occupied by the Kitchen and Market saw 53,982 meal plan transactions while in its first year, Kissam Market transacted 174,041.

Together, Kissam Market and Kitchen are designed to provide what every college student wants and needs in an onsite foodservice, including a 24-hour market; a chef-attended and -created menu of entrees, sides, grab and go, fresh produce and local items—and all of it mere steps from their rooms.

Comfortable seating spaces allow students to gather, but for those who need to take out, biodegradable to-go containers are available.

Warren and Moore Colleges are the latest of Vanderbilt's residential College Halls and were designed to convey the ambience of a small college community while still affording students an education at a world-class research university with a wide variety of academic programs. Once students enter Warren or Moore College in their sophomore year, they can remain in the same college through their senior year.

The $115 million Kissam project was funded entirely through philanthropy and internal resources. Campus dining’s Market and Kitchen project cost was $750,000.

It followed the first phase of Vanderbilt’s College Halls initiative, the Commons, which opened in 2008 and brought together all first-year students in 10 houses, each guided by a faculty head of house, a member of the university faculty and mentor who lives among the students in a faculty apartment.

While Kissam Market and Kitchen serves as the shared facility for students residing in Kissam College Halls, any Vanderbilt student, faculty, staff or visitor may dine or shop there.