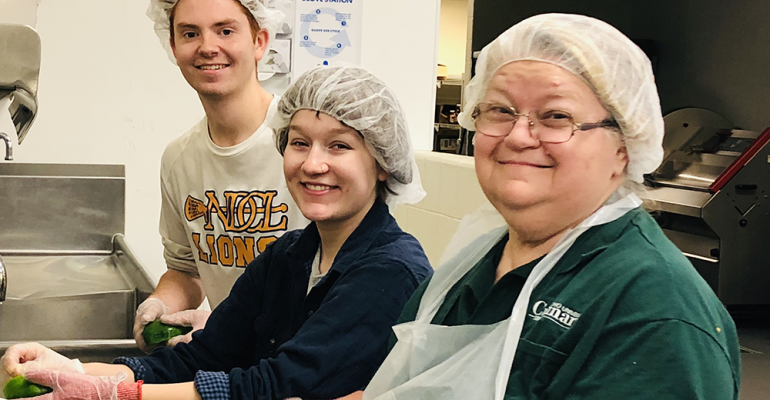 Onsite dining departments that operate central production kitchens often don’t make full use of the facility’s capacity, which means there’s extra revenue generation potential sitting there. At Ohio University (OU), they decided to do something about that, so a few years ago the school’s dining department approached local produce vendor Produce One with an offer to process products for it in the OU central kitchen. After all, the kitchen already had produce chopping and dicing as well as packaging equipment that often sat idle, so why not make use of it.

So now, Produce One gets a range of processed products—grapes, apples, cantaloupes, honeydew, pineapple, celery, jicama strips, peppers, tomatoes, broccoli, cauliflower—much of it sealed in 2-ounce packages all ready for delivery to its K-12 clients. Meanwhile, OU has another revenue stream, one that generated about $214,000 in the last full fiscal year, not all of it from Produce One.

And OU Dining is looking for more clients, even if it has to go out and solicit the business, says Mary Jones, associate dining director in charge of the central kitchen operation. “We wanted to do something to have a profit in this building [from the start], she says. “[Produce One] never contacted us, and we’ve always had to [go out and market] that we can do this.”

Fitting the additional business into the operation hasn’t been difficult, she notes. “It takes about 30 hours a week, [and it’s done] when we’re slowed down, like at the end of the day, but our priority is to take care of the students first.”

No labor hours have been added to accommodate the extra work, adds Rich Neumann, OU’s director of culinary services

“We’re just more efficiently using our staff,” he says. “We [also] try to utilize our student help as much as we can.” He estimates that about 30 student workers have been used to fulfill outside contracts, mostly by doing the bagging.

The outside business also did not require the purchase of any additional equipment for the kitchen. “Everything is equipment we need to run our operation here at OU,” Neumann says.

Nor is capacity likely to be stretched in the foreseeable future, he adds, estimating that OU could accommodate at least double its current outside business without disrupting its primary mission of producing bulk ingredients and packaged to-go meals for OU’s dining operations and retail markets.

Among its more popular offerings is a line of ready-to-go meals such as mac ‘n cheese, sweet and sour chicken, boneless Buffalo wings, General Tso chicken, Buffalo and barbecue drummettes and assorted soups. Over 300 of these were sold in OU’s three campus markets in a recent five-day period.

Of course, this for-profit part of the central kitchen activities is segregated from its traditional operations. It has its own profit-and-loss statement and is subject to unrelated business income regulations.

Nevertheless, it is an increasingly important venture given the realities of the current college dining environment, Neumann explains.

“The reason we’re doing this is because we’re being asked constantly to look for additional streams of revenue,” he notes. “Also, state support [for public universities] is dropping as it is elsewhere nationwide,” forcing schools to make up the difference in other ways.