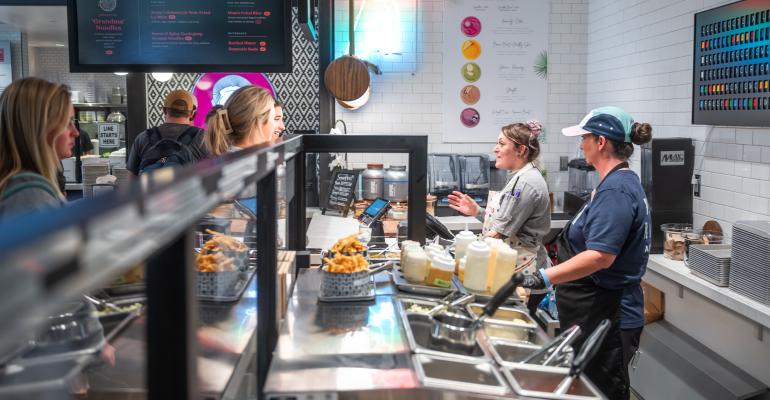 Earlier this fall, Auburn University opened its new hospitality management complex, the Tony & Libba Rane Culinary Science Center, which is based on a vision originally articulated by Ritz-Carlton founder and former CEO Horst Schultze for a comprehensive hospitality education facility. Designed to offer aspiring students the opportunity to learn all facets in the field of hospitality, the Rane Center includes culinary laboratories, a hotel/spa, a teaching restaurant, a coffee roastery/café, a microbrewery, a wine lab and a 10-stand food hall called Hey Day Market that opened to student customers in mid-August at the start of the 2022-23 academic year.

The 10,000-sq.ft. Hey Day Market (the name derives from a school tradition originating from welcoming returning soldiers after World War II) designates itself as a “food and gathering place” for the entire Auburn community, not just the hospitality school, and accepts payment using the school’s dining dollars and Tiger Club accounts (except at its bar). Open from 10:30 a.m. to 9 p.m. daily, it is operated by hospitality firm Ithaka Hospitality Partners and is not affiliated with the Auburn University campus dining program.

Marc Osier, Ithaka’s managing partner for food halls and restaurants at Auburn, characterizes the relationship with campus dining as “friendly neighbors” and the Rane Center’s status as being at “the corner of campus and community,” as it houses academic facilities for the hospitality school while also being “right where the [off-campus] community starts”; in fact, Hey Day has been drawing considerable off-campus traffic in addition to Auburn students and staff.

Osier suggests the multi-generational nature of the Hey Day clientele distinguishes it from a typical university dining hall, where most diners are students, and helps make it popular with older graduates returning to campus as well as nearby families, who can eat while their kids enjoy the various games and activities spotted around the facility and its environs, which include an adjacent broad green space.

“Even if you can’t come with your family, there are so many people that you can sit down with even if they’re strangers,” Osier observes, citing one instance where he saw two coeds dining and chatting away with an older lady he thought was their grandmother until he discovered they had just met when they sat down to eat.

“Each stall is an independent with a chef-owner and they are all chef-quality, chef-driven concepts,” he explains. “When students ask me which one they should try, I tell them, ‘just get in the shortest line!’ because they’ll be back anyway and then the lines will be different so they can then try something else. ”

Each concept follows its own menu strategy in terms of what it serves each day. Here’s a rundown of the concepts at Hey Day…

Khoodles, also operated by Carson and owned by Eat Concepts LLC with Malaysian restaurateur Roy Khoo, specializes in Malaysian street noodles inspired by family recipes passed down through generations and includes noodle and rice bowls along with boba tea drinks.

Ithaka operates four of the concepts at Hey Day Market. They are…

Saint Bernardo Gelateria, which makes its own geletos and also operates a mobile cart used at catered events.

La Cubanita, a pop-up serving classic pressed Cuban sandwiches with ham, mojo pork, yucca and plantain chips, as well as traditional Cuban drinks. It occupies the space intended for an “incubator” where, in the future, hospitality program graduates will win occupancy for a year’s term, with the university supporting them in starting a business.

Hey Day also includes a podcast booth where visiting hospitality experts can record their observations while surrounded by the sounds coming from the food hall, “so it’s not just a sterile talk,” Osier explains. “It’s almost like listening to someone talk over dinner, a beer or a glass of wine.”

The Rane Center also houses the 48-seat 1856 teaching restaurant with its two-story wine room stocked with bottles from around the world. The restaurant’s Chef in Residence program will each year bring a nationally acclaimed chef who will work alongside the culinary science faculty to create a unique restaurant concept, providing an ever-changing culinary experience for students as well as the clientele, who can watch as their dishes are prepared in the restaurant’s open kitchen.

Another hands-on educational component of the Rane Center is the luxury Laurel Hotel & Spa, offering 26 rooms plus another six residences, a private club floor called the Library that is a common space for guests with complimentary food and drink, and a rooftop garden tended by the university’s horticulture department that supplies some produce and herbs to the food hall as well as to the adjacent Auburn Hotel & Conference Center and to 1856.

“We built the hotel to give hospitality students a first-class education and experience in running a luxury property where we teach everything from loss prevention and engineering to housekeeping, culinary and food & beverage,” Osier explains. “They rotate through every department.”

Scheduled to open soon are a micro coffee roastery and a microbrewery, the latter receiving special permission from the state legislature to serve its creations to age-qualified customers, thus giving students the opportunity to see how what they produce goes down with actual customers. Meanwhile, the coffee roastery will let students get immersed in the process of making artisanal coffee beverages from bean to cup through hands-on learning activities like roasting, grinding, tamping, pouring and serving, with hotel guests and local patrons who visit the roastery getting to taste the results.