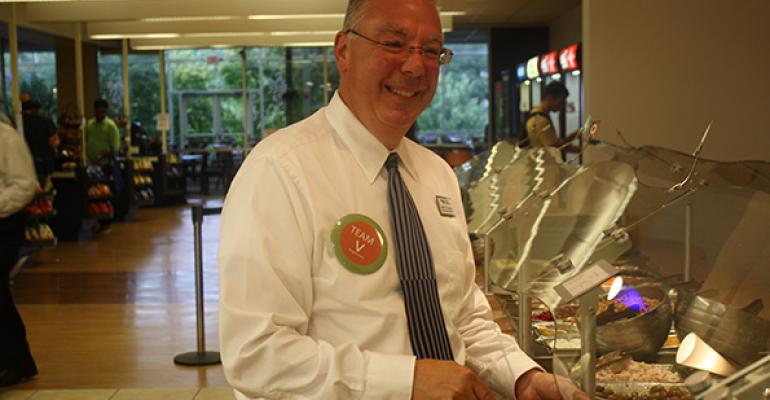 27 managers challenged themselves to spend a week following the diets of those with allergies and other restrictions and the lessons learned were invaluable.

Georgia Tech’s dining department managers didn’t spend a week walking in their students’ shoes, but they did spend a week eating their students’ food. During the first week of September, 27 managers spent four days on campus following the diet plans of students with special dietary needs in an effort to better understand their customers and the department’s offerings.

The managers—from all of dining services, including chefs, the marketing team and nutritionist—wore buttons signifying which “team” they were on: vegan, vegetarian, nut-free, gluten-free, casein-free, multiple food allergies and Mindful, a health and wellness program from Sodexo, which operates foodservice at Georgia Tech. Each person committed to following those diets during work hours, including at least one meal, and a few extended the challenge to meals away from work. Everyone has to read labels and ask front-line staff about ingredients and cross-contamination.

“I wanted to see what it would be like to put us in those positions,” says nutritionist Amber Johnson, who came up with the idea. “I read about Cornell doing it and thought it was a great idea. It was a really neat chance to switch roles and being on the other end makes things easier to see. We saw how good and varied our offerings were and what those students have to deal with.”

Johnson, a vegetarian, spent the week following a diet limited by multiple allergies. She ate her meals at the school’s Simple Servings stations, which provide food made completely free of the most common allergens (peanuts, tree nuts, shellfish, wheat, soy, milk products, eggs and gluten), a branded concept from Sodexo Campus Service.

She enjoyed the options, but Johnson’s takeaway was the two Simple Servings stations were on opposite edges of campus, a long walk for those in the middle. “I’d like to put one more central to campus,” she says. “This is healthier, clean and simple food, something everyone else would like too.”

Christine Kapurch, a unit marketing coordinator, spent the week eating only items that fit into Georgia Tech’s Mindful program, another concept from Sodexo, that labels healthy options lower in calories. She was also impressed with the variety of options, but saw an opportunity to better educate staff on it so they could better promote it.

Kapurch says the lessons learned were invaluable and they plan to do this again in the future.

“Our students already know what they’re dealing with and how to handle it, but for our management team, this was a difficult process to get acclimated to and we learned what to look for and ask for,” says Johnson. “It gave us a greater appreciation.”