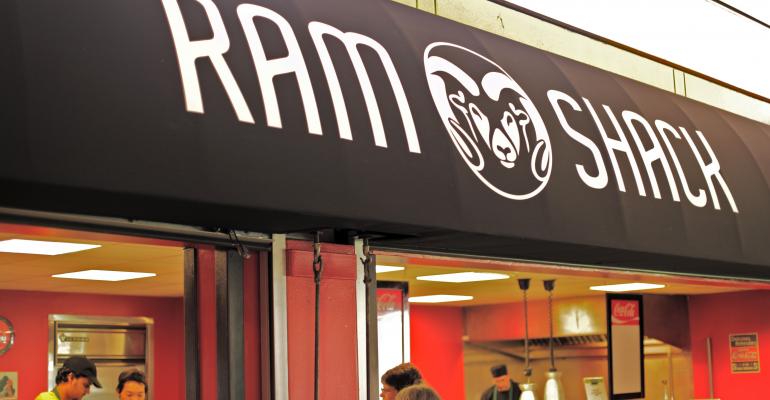 <p>Colorado State&#39;s new gourmet burger outlet opened without a name, but after immediate success and a student naming contest, an awning was added with the name Ram Shack.</p>
News & Trends>Colleges & Universities

Ram Shack has provided students an on-campus option to the popular Five Guys and Smashburger restaurants and helped revive an aging dining facility.

There’s a reason Five Guys went from a few units to more than 1,000 in less than a decade. People love burgers, and the fast-casual chain makes a darn good one. The better burger segment has been on fire on the commercial side of the restaurant industry in recent years, so it’s no surprise that a similar concept might work on the college side.

But at Colorado State University, the idea has done more than work. It’s helped bring to life an aging dining hall that has struggled for years. Ram Shack opened last January in Parmelee Dining Center and the facility has gone from serving fewer than 100 customers a day to more than a 1,000.

Mark Petrino, CSU’s senior associate director for residential dining, says the inspiration for the gourmet burger concept came from the long lines he’d regularly see at the off-campus Five Guys restaurant and Smashburger, another better burger chain headquartered not far away in Denver.

“Everyone has a gourmet fresh burger concept, even Tom Colicchio and Gordon Ramsey,” says CSU’s Peter Testory, assistant director for culinary and support services. “I thought students would either latch onto this or steer away from it because of all the healthier options.”

Judging by the more than 2,000 pounds of ground beef being served at Ram Shack each week, students have latched on and aren’t letting go. Petrino eased into the concept at the start, just in case, by only offering a menu of burgers and “all the fixings.” Students can customize their single or double burgers with lettuce, tomato, sautéed mushrooms, onions, bacon (three days a week) and more through an assembly-line ordering model. House-made shoestring fries and rosemary potato chips are available as sides and after the initial success, milkshakes have been added to the menu to give Ram Shack a 1950s-style diner feel.

Parmelee Dining Center is one of the older facilities on the Fort Collins campus, but it is located next to and shares a kitchen with the recently renovated Corbett Marketplace. Petrino says he’s been fighting an uphill battle trying to spread business away from the popular Corbett and into the aging and sparsely crowded Parmelee. Nothing worked until Ram Shack debuted. Parmelee also still offers a pizza station and salad bar that are seeing more business as a result of Ram Shack.

Petrino credits Ram Shack’s early success to a marketing campaign that not only got students to help name the new concept, but also buy into it. It opened without a name and students were invited to offer suggestions and after the more than 100 entries were submitted and narrowed down, the five favorites were voted on via Facebook. Ram Shack was the winner, as the new large awning outside it says, but Petrino’s department also got plenty of free promotion from students lobbying via social media for their suggestion.