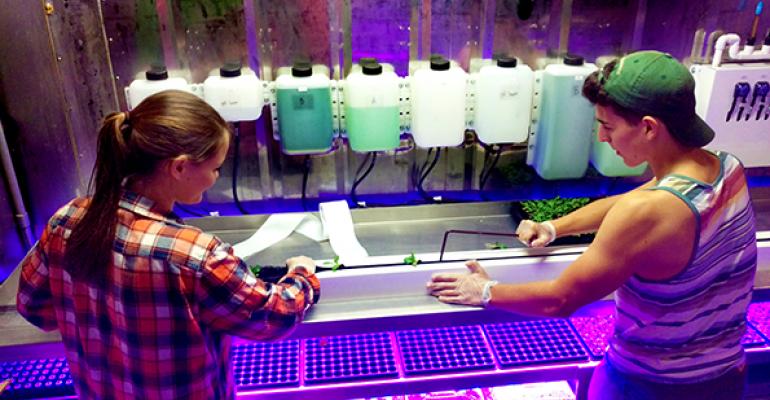 Growing greens in a shipping container

An up-cycled shipping container supplies high-quality, hyper-local greens to kitchens at the State University of New York at Stony Brook as part of the campus’s sustainability mission.

When students at Stony Brook University, a flagship campus in the State University of New York system, returned to school in August, they discovered a truck-sized green-and-white box had been installed behind Roth Food Court. The colorful box is actually a shipping container that has been repurposed to hydroponically grow crops year-round.

The Leafy Green Machine (a.k.a. LGM) will supply campus dining services with high-quality specialty greens. The box was developed and built by Boston-based Freight Farms. The Stony Brook site marks Freight Farms’ second school installation—its first unit was rolled out to a high school in downtown Boston in 2013.

Sodexo, Stony Brook’s new dining services provider, proposed the plan as part of its initial proposal to campus dining early in 2015. “Our team had been looking for a dining partner with the same vision as us: reducing our carbon footprint, sourcing locally and sourcing organically,” says James O’Connor, director of sustainability & transportation operations for the 25,000-student university.

Campus administration, including University President Samuel Stanley and the school’s senior leadership team, were very interested in setting up a pilot project. The farm-in-a-box mission dovetailed with Stony Brook’s ranking as the country’s fourth most environmentally responsible college in 2015 in a survey by The Princeton Review.

A Look Inside
Stony Brook’s LGM consists of an insulated shipping container—a standard 40-by-8-by-9.5 foot size—equipped to produce high volumes of hydroponic greens. Just inside the door is a workstation where seedlings are planted and transplanted. The walls hold nutrient-dispensing containers. The majority of the space is occupied by rows of vertical growing towers, which can hold up to 4,500 plants. A 43-gallon water tank under the worktable supplies water to seedlings, while further back a 137-gallon tank trickles nutrient-rich water through the vertical towers to reach root systems.

Day-to-day operations are handled by Sodexo Manager of Campus Dining at Roth Food Court David Schmitz, plus two student employees, Kylie Campanelli and Chad Marvin. The students each log up to 20 hours a week to handle growing, transplanting and harvesting of the greens.

Everything about Stony Brook’s farm-in-a-box is high-tech. Nutrients are delivered to roots via a computer-controlled drip irrigation system. A smartphone app allows Schmitz and his team to monitor and adjust settings as needed.

Light is provided via high-efficiency LEDs, whose intense red and blue hues serve as (deep purple) sunlight. The lights automatically cycle on and off to simulate day and night.

Since October, Stony Brook’s high-tech farmers have been delivering about 500 heads of fresh bibb lettuce per week—the equivalent to the yield of one acre on a traditional farm—to the Roth Food Court.

Produce from the farm-in-a-box will help offset food costs at four campus dining facilities. “The lettuce we’re growing is not only be much fresher but also higher quality—and grown only steps away from the kitchen,” Schmitz says.

The team’s first semester crop centered on bibb and red oak leaf lettuces. The LGM can also grow romaine, butterhead and delicate lola rosa lettuces, brassicas such as kale and Swiss chard, as well as arugula, parsley, basil, oregano and mint, to name a few.

Paying for Itself
The system’s initial cost tallied about $89,000, a price tag that included the container, delivery, setup and the first set of growing supplies. The highly efficient farm-in-a-box is expected to be a cost-neutral project.

“The system requires 90 percent less water than an outdoor farm would require, plus it will operate year-round regardless of outside temperatures,” O’Connor says.

Freight Farms estimates average the unit’s annual expenses at about $13,000 per year, including electricity, water, packaging and growing supplies. The system consumes about 80 kilowatt-hour (kwh) of energy per day, or around 30,000 kwh annually—about the same energy amount used by two households.

“Gauging from their reactions, our students will take this to the next level,” Schmitz says. “They’re the ones who will make a difference going forward. They are excited by the LGM’s possibilities.”

“Instead of just talking about sustainability issues, the LGM provides a hands-on solution,” says Caroline Katsiroubas, Freight Farms community manager. “And once students graduate, they may be inspired to bring similar growing technologies to other places, or perhaps start their own farming business.”