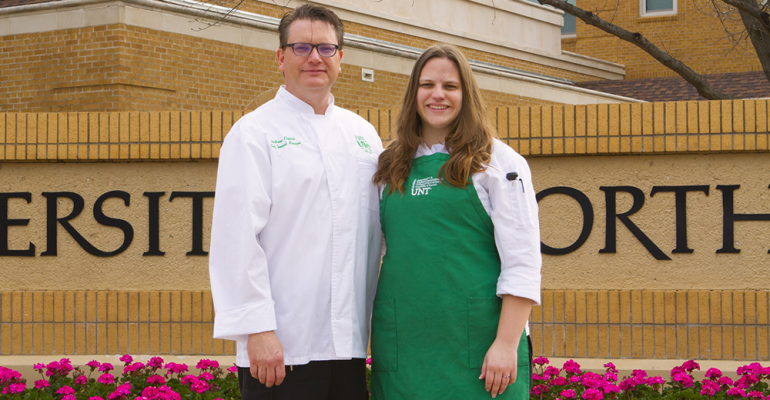 Nastassja Klipsch and her father (and general manager and chef of UNT’s Bruce Cafeteria) paired together for a recent guest chef event.
News & Trends>Colleges & Universities

Ever since Nastassja Klipsch, now a senior in University of North Texas’s (UNT) Hospitality program, was a little girl, she has been helping her father in the kitchen. At 14, she worked in her father’s catering business and at 16, ran the concession stand at his outdoor music venue. This past April the daughter and father team had the chance to work together again as part of UNT’s Guest Chef Day program at the school’s student-run restaurant, the Club at Gateway Center.

In this case, Klipsch is not just a local chef – he’s a pillar of the UNT dining program. “Andrew is the general manager and chef of UNT’s Bruce Cafeteria, which serves up to 5,000 guests a day and has an incredibly good reputation for quality food,” says Joe O’Donnell, general manager of the Club at Gateway Center. 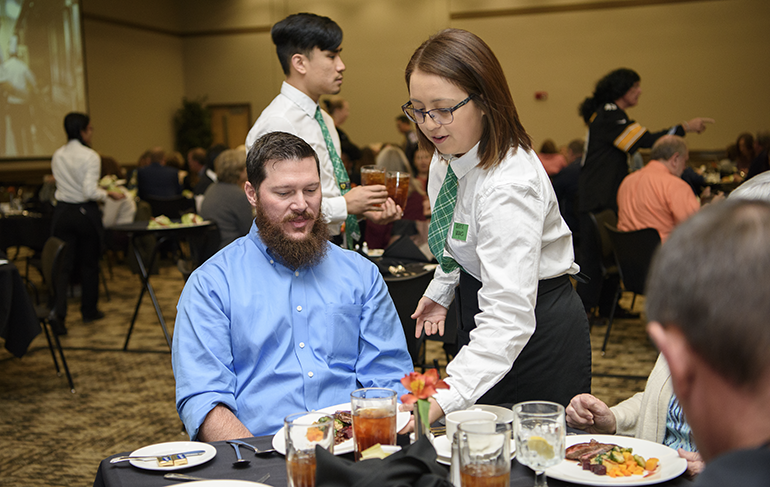 A hospitality student serves a customer at a guest chef event.

Klipsch is also involved in the management and operations of multiple campuswide cookout events throughout the year and is also pursuing a master’s degree at UNT in interdisciplinary studies. His culinary experience includes owning restaurants, bars and a catering facility; and he has been a corporate chef, executive chef and has managed catering, concessions and foodservice for race tracks, music venues, golf courses and private clubs.

Klipsch’s Guest Chef luncheon was very well received by the guests, according to O’Donnell. “It kind of tells you something because it was a simpler menu than many of them have been,” he says. “His menu had a little bit of a German influence to it, and it was very well executed. Our guests enjoyed it immensely.”

Beyond the menu, O’Donnell also says Klipsch’s even-keeled demeanor with students was also well-received. “Most of our students don’t have a food and beverage background and this program is intended to expose them to working with the different personalities and visions of chefs, some of who have a more aggressive method of communicating,” says O’Donnell.

Exposure to working chefs is just one part of the program. All UNT students earning bachelor’s degrees in hospitality management must enroll in two restaurant operations courses and spend two semesters in the Club at Gateway Center to practice fine-dining service techniques, management skills, menu planning, financial management, marketing techniques and food production. “In a 16-week semester, the restaurant is only open for nine weeks,” says O’Donnell. “Each week the students rotate through roles of servers, managers, and the various positions in a restaurant.”

O’Donnell says that when the class first started, about half of the students had interests or backgrounds in food and beverage, but now only about 10% of the students do. “These days, the students are more interested in managerial roles, front desk operations, revenue management, special event planning and destination management,” says O’Donnell. “But it's critical that they understand food and beverage operations because it touches any other part of the business that they're going to be in, and it's one of the more difficult parts.”

Through the Guest Chef program, the Club is not only able to attract the campus and surrounding community for what’s typically a sold-out lunch, the program also adds real-world experience to their student’s education. Past guest chefs since the program started 30 years ago have included those from local, well-regarded restaurants, large-scale hotels and even recipients of the American Culinary Federation’s USA Chef of the Year award.

O’Donnell says the invited chefs have total freedom to create their luncheon menu. “I just ask them to develop a three-course menu and to try to keep cost under $15,” says O’Donnell, “and that’s usually not a problem when they work it out with our chef instructor.”

As an added benefit, bringing in local culinary professionals strikes up new relationships for the hospitality department, which creates new channels for its graduates to land internships and employment.