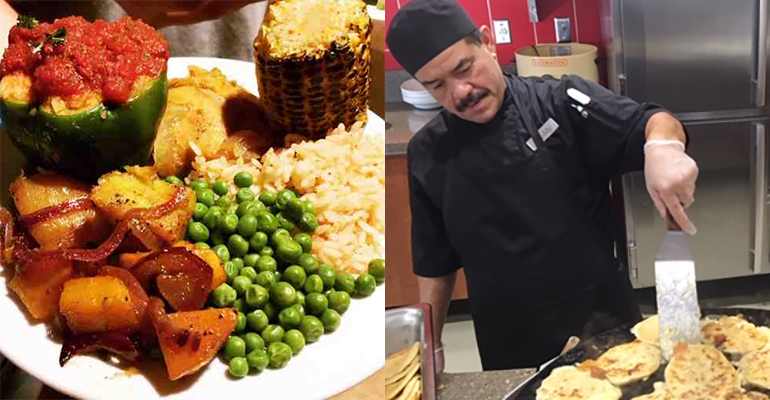 In a collaboration between dining and the Latin Student Association at the University of Mary Washington, an authentic feast celebrating the culture was warmly received.

Latino Identities Month in September was celebrated at the University of Mary Washington (UMW) with events throughout the month, from lectures on Latino literature, art and film to music and dance. The rich culture of Latino food was in the spotlight at the University Center for a Latino Melting Pot Dinner, a collaboration between the Latino Student Association (LSA) and UMW’s Sodexo Dining Services.

More than 900 students, faculty and staff feasted on traditional Hispanic dishes from all over Latin America, showcasing just how diverse and far reaching the culture is, with food traditions migrating and changing over generations. The meal included Brazilian beef with chimichurri, chili-rubbed tilapia, chipotle chicken burritos, arroz con pollo, plantains with horchata rice pudding and churros for dessert.

UMW Executive Chef William Hardy drew on his own Mexican ancestry to create the menu for the event and also tapped one of his star chefs, Freddy Gonzales, a native of El Salvador. Gonzales wowed the crowd with his family recipe for pupusas, passed down through several generations.

Pupusas are a Salvadoran dish of a thick corn tortilla (made with masa) stuffed with a savory filling. Pupusas can be made with a mixture of cheese and refried beans, and the recipe is adaptable so different proteins can be incorporated into the filling. The dough is hand-shaped into a bowl shape, then filled up, shaped into a ball and flattened between hands, but not enough to make the filling come out. Then the pupusas are cooked on a hot skillet until they puff up and become golden brown.

Gonzales filled the pupusas with pork and cheese and served jicama slaw and tomato sauce on the side. The savory bundles were the hit of the evening, drawing long lines at the station and lots of positive comments from attendees.

“Those pupusas were amazing,” one student raved. “It was really great to taste something from an old family recipe from someone who actually came from El Salvador.”

In addition to a taste of true Latin American food, the Latino Melting Pot dinner was a chance for students to meet the LSA executive board.

“By attending these activities, you will be able to understand and get a view of the significant roles and contributions that Latinos play in our society,” the LSA board said in a statement, adding that the events were designed to “address and raise awareness of current issues facing many Spanish-speaking communities, and society, in general.”