Liberty University and Sodexo open dining concepts at nearby mall 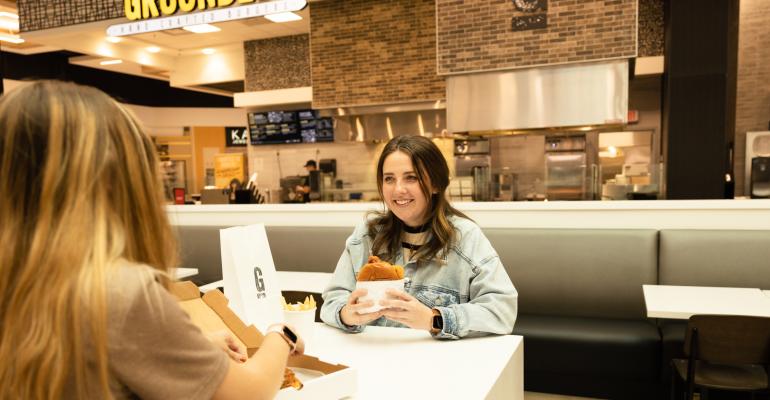 Start Slideshow ›
Three dining concepts, two of them created especially for the mall environment have been opened by Sodexo and Liberty University at the Lynchburg River Ridge Mall.

Liberty Dining by Sodexo has officially opened three brand new restaurants at the nearby Lynchburg River Ridge Mall Food Hall, which is owned by Liberty University but operates as a standard commercial mall with units of notable national retail brands such as American Eagle, JC Penney, Dick’s Sporting Goods and Sephora as well as a Regal Cinemas movie theater and a food hall, where the three university/Sodexo concepts debuted on Oct. 18.

Grounded Handcrafted Burgers and Zaza Stonefire Pizza are brand new restaurant concepts that were created specifically for the mall’s food court by Sodexo while the third is a unit of Sodexo’s proprietary Asian food concept Mein Bowl, a brand it developed through its partnership with Hissho Sushi. Sodexo says this is the first time it has installed any food concepts within a mall setting.

Related: C&U On Demand: Chad Coats of the University of Arkansas talks about the Hill Coffee Co. outlet that has become a popular campus social and refreshment hub

Zaza features personal-size pies with a New York style crust and customized toppings baked in a stone fire oven in under five minutes, while Grounded is a burger concept through which “we really wanted to create a quality half-pound burger” that’s cooked on a rotating grill in front of customers, says Duane (Duke) Davis, Sodexo district manager. They complement existing stations in the Food Hall such as a Chick-fil-A and local salad/sandwich/pita concept Farmer’s Garden.

“They both do very well but the mall just needed some more variety,” Davis says, “so we said, ‘Well, let’s add a burger concept, a pizza concepts and an Asian concept’.” All operate over the same hours as the mall, seven days a week.

Liberty Dining created fresh new menus for the new concepts that allow for customization and they are also offering gluten-free options as well as are striving to provide more variety to vegan customers. All three concepts accept Liberty’s Flames Cash meal plan tender as a way to attract more students to visit or patronize the mall, which is adjacent to campus and only a short bus ride away.

Student traffic has been slow in the early going, with most customers drawn from the Lynchburg community, but Davis says he expects an uptick when the movie theaters reopen. In addition, he is looking for holiday-driven mall traffic to boost sales, one reason the concepts were opened in October rather than waiting until next year. Not surprisingly, weekends have been busiest so far as that is when mall traffic tends to escalate.

Davis adds that the staffing issues plaguing many foodservice operations have been minimal given the attraction of the venue. The workforce includes Liberty students.

“We did this because of the partnership we have with Liberty and their affiliation with the River Ridge Mall,” says Davis. “It’s a way to add some variety to the River Ridge Food Hall and give them some options they didn’t have, kind of like we’ve done on campus.”