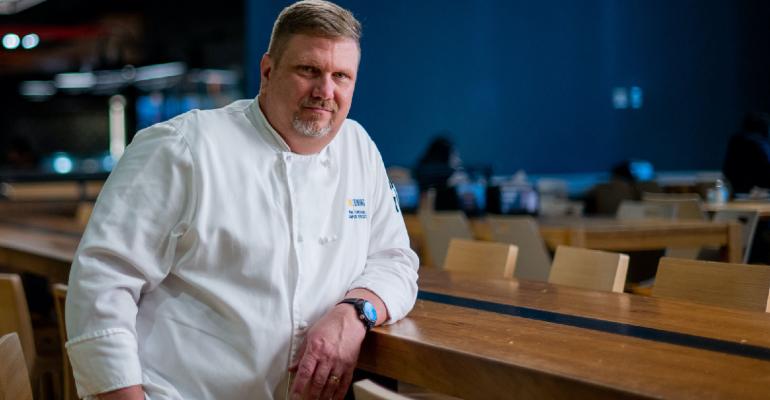 For smaller colleges, buying local is a manageable challenge. Schools like University of Michigan (UM), which serves some 20,000 meals a day, are on a different scale altogether. Despite that, executive chef Frank Turchan and his Michigan Dining team are committed to forging a more sustainable operation that features local products.

Michigan is known as a major fruit-producing state, so it’s no surprise that a good chunk of the local purchases is fruit. One local partner, J&T Todosciuk Farms and Greenhouses, sells apples to the university as well as tomatoes, zucchini and other salad bar ingredients. The majority of fruit on campus yogurt bars comes from Farm to Freezer, a Michigan firm that buys in-season produce from farmers across the state, then flash freezes it. And the university operates a campus farm, which produces for the dining halls as well.

Seafood, another Michigan specialty, also is a big purchase. The university buys up to 10,000 pounds of Lake Huron whitefish from Bay Port Fish Company each year. The fish is shipped filleted, then frozen, and is available throughout the school year. UM’s demand represents about 15% of the fishery’s annual income. Beef, pork and chicken are also delivered from Michigan and Ohio sources.

Approaching potential partners is a delicate dance, Turchan says. He needs to make sure they can handle the volume, so he brings hard numbers into the discussion. His goal is to avoid overwhelming smaller producers. “We want to make sure these vendors will be around longer than the relationship,” he explains.

Turchan has been cultivating partnerships with area food producers over more than a decade. About 19% of food served at the school’s nine dining halls comes from local and sustainable producers within a 250-mile radius of Ann Arbor, he says. He’d like to see that number rise to 20% over the next three years.

There are hurdles to achieving that figure, Turchan acknowledges. One is government regulations. “We’d like to buy more Great Lakes fish,” he says, including salmon, trout and perch. “We can’t, because of state regulations about what can be harvested,” he adds. Michigan is also a major dried bean producer, but the majority of the crop is shipped elsewhere and often combined with beans from other states. “Ironically, there’s not a simple route to get our beans here,” he notes.

The other issue is the Midwest’s limited growing season. Spring, summer and early fall crops are plentiful, but availability and variety during the colder months is limited; flash frozen produce has helped bridge the gap. And storm- or drought-driven crop failures are a possibility. Sometimes suppliers end up with an abbreviated season and can’t produce the volume the university needs. In those cases, Turchan works with the partners to make the best of the situation for both parties. The regular apple supplier lost its entire crop one year, for example, so UM had to find apples elsewhere, but the farm also produces honey, now sold in campus retail outlets.

During 2020, when Michigan Dining wasn’t serving its normal volume of meals, the reverse was true: the department faced a glut of contracted product from local vendors. “We worked it out. We sent some items to food banks, sold some to employees and looked at other creative solutions, “ Turchan says.

Having local partners on board has helped the university weather difficult times as well. Over the last two years, with supply chain glitches hampering many foodservice clients, Turchan says at times “we actually relied on a lot of local vendors more than national vendors because they were more nimble, more flexible.” A meat purveyor helped him source hard-to-find cookie dough, for example.

Working with smaller suppliers has other benefits, including the ability to customize orders and request items in smaller quantities. During COVID, the university has adopted a standard menu for its nine dining facilities, but in normal times the menus vary to reflect different demographics, such as vegetarians and international students. Each facility does its own ordering, working against a shared database of recipes, so in any given week one dining hall might need a limited amount of any product. That, in turn, reduces the likelihood of food waste.

Partnering with area producers is but one element of the university’s Sustainable Food Systems Initiative, intended to bring together the university and communities to build food systems that are health-promoting, economically viable, equitable and ecologically sound.