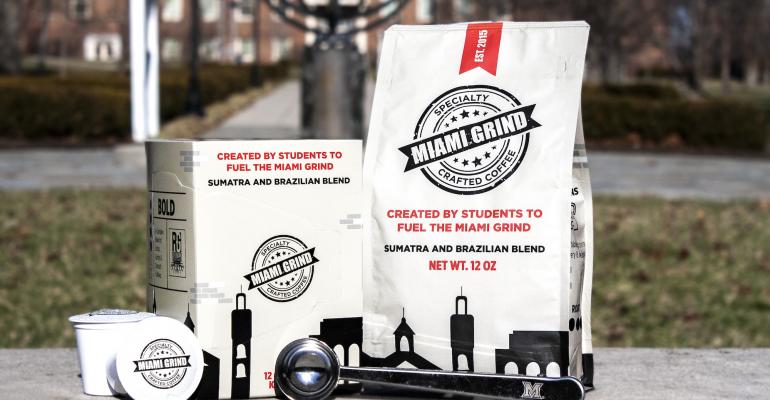 Back in 2015, Miami University (MU) Dining Services partnered with locally based Rooted Grounds Coffee to introduce the university’s own Miami Grind coffee blend, which has been served across campus in dining halls, retail cafés, catering operations and concessions ever since. This spring, MU and Rooted Grounds Coffee are extending the initiative with the introduction of retail K-Cup and 12-ounce packages of Miami Grind, which will be sold in campus stores and dining outlets, as well as online, beginning Jan. 25th, when students return to school following the winter break.

“I wanted to build our brand and provide our students with something unique from Miami to Miami,” explains Geno Svec, executive director of campus services and chief hospitality officer at the university. To that end, Svec approached Patsy Knopf, owner of Rooted Grounds and an MU alumna, about a collaboration on a proprietary product. A team of MU students and staff then worked on carefully narrowing down the blend to a few select options.

“We roasted, we picked, we ground, we brewed, we tasted, then brought it back to main campus and set up a tasting in our student Armstrong Center, and the students picked the liquid coffee and chose what is now Miami Grind. They also chose the name,” Svec recalls.

In addition, the espresso beans used to make premium coffee drinks such as lattes at two non-Starbucks campus locations also come from Rooted Grounds products not under the Miami Grind label. Meanwhile, one campus café currently undergoing a refresh “and that is going to be heavily focused on Miami Grind coffee and other Rooted Grounds [products],” Svec notes.

Since Miami Grind’s introduction, the MU dining program has gone through 11,678 pounds of the product, according to Svec. The coffee’s growing popularity prompted Svec and his team to contemplate a brand extension, which is now being realized with the retail packs.

While Miami Grind will initially only be sold on campus and online, “I’d love to get it out there for the local Oxford community [MU is located in Oxford, Ohio] to buy as they’re grocery shopping,” Svec says, but first he has to navigate entering the supply chain. Meanwhile, off-campus customers can purchase the coffee online.