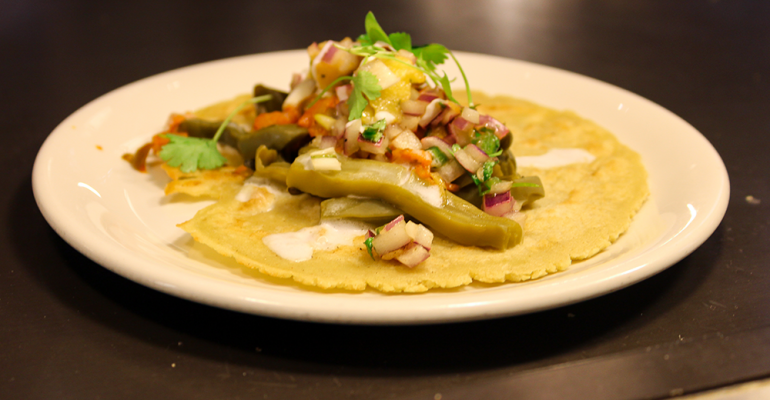 Forward Food summit at U of Michigan features latest evolutions for the meatless menu of the future, including fresh ideas for ingredients like prickly pear.

A program from The Humane Society of the United States (HSUS), Forward Food events take place at various institutions around the country, focusing on plant-based nutrition and ways to make it profitable—and delicious. The Forward Food event this month at the University of Michigan in Ann Arbor brought some new plant life into the North Quad dining venue and was attended by about 100 students.

Cooking demonstrations of avocado toast by Chefs John Merucci (chef de cuisine) and vegan chocolate-coconut cream pie by Jordan Zechman (pastry chef) from the University of Michigan were the highlights of the event, bringing the plant-based ideas to life on the plate.

Nopales (aka prickly pear) tacos (pictured above) were served—using canned nopales, minus the needles—a cool use of an item that’s “pretty tasty with some interesting health benefits (Vitamins A, C and K, plus antioxidants),” Merucci says. “We’re using nopales more often and getting a lot of good feedback.”

Merucci says the event is a good way to keep a plant-based conversation going with students and also to keep his team’s plant-based culinary game strong, since “we’re doing more and more vegetarian and vegan cooking across campus,” he says. 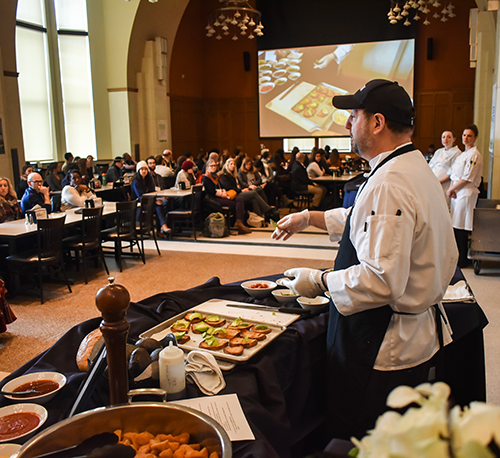 “We have strictly vegan service points at a couple of locations and we mandate at least one vegan item every day at some of the smaller units,” Merucci (left) says. “Plant-based food is less costly than [animal] protein, so it’s helping across the board.”

Relationships between the dining team and local farmers have blossomed, too, with more vegetables meaning more opportunities to do business. According to Keith Soster, director of sustainability and student engagement, the “local spend” by the foodservice program is now at 17.7%.

And while Michigan isn’t an agricultural school, about 5 years ago, two acres of a university-owned botanical garden was converted into a student farm with hoop houses.

When it comes to putting those veggies to use, Merucci has found himself drawn to several culinary regions when it comes to creating a successful plant-based menu item: South America, Spain, North Africa and the Mediterranean.

“Although, sometimes we’re taking classic recipes that would use meat and reworking that with seitan or tofu,” he says.