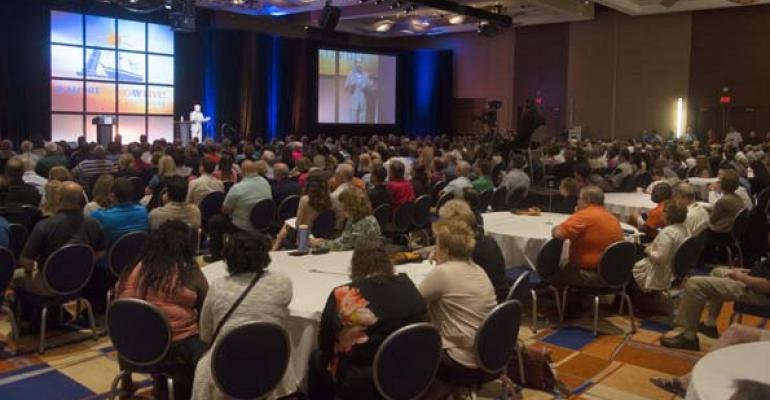 NACUFS Looks to Become Sum of its Parts

Zia Ahmed takes the helm of NACUFS as it embarks on governance changes to become a stronger organization.

NACUFS has always been known for its six strong regional groups that acted almost as their own organizations, but the college foodservice trade association is now looking to modify its governance structure to become a stronger national group.

A majority of members at the general assembly on the final day of NACUFS’ national conference in Baltimore last month voted to proceed with conceptual changes to become what executive director Gretchen Couraud calls “one NACUFS.” Members will now have an extended period for additional comment and the proposed model will be refined and modified before being voted on and enacted at next year’s national conference in Indianapolis.

“What we’re working to do is align the organization so it’s strong and to create greater member value while respecting the role regions play and strengthening them,” Couraud says.  The six regions will remain in place, but regional presidents will not sit on the national board. New president Zia Ahmed says each region will be represented there and in all national committees.

“Regions are still very important,” says Ahmed, Ohio State’s dining director who took the helm from past president Mark LoParco during the conference. “We’re making sure all the values those regions bring to the table are still there, but we just want to make sure we’re doing this holistically and not six different ways.”

The changes will help protect the non-profit trade association from potential legal and financial risks and make it more valuable for members, Ahmed says.

NACUFS was founded in 1958 and currently has 550 institutional and 500 industry members. More than 1,100 people attended the conference, including 781 institutional members. Sharon Coulson, from the University of California, Davis, was honored with the Theodore W. Mina Distinguished Service Award. Matthia Accuso, catering chef at the University of Massachusetts, won the culinary competition with his Slow Cooked Lobster with Lobster Kale Tortellini, Citrus Glazed Carrots, Celery Root and Fennel Butter Sauce. Chefs from the six regions competed using live lobsters and were judged by a panel of ACF judges.