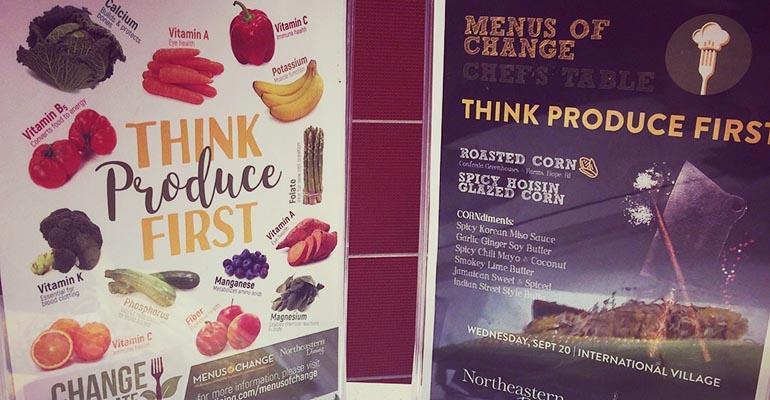 Innovation is essential throughout Northeastern University’s award-winning dining locations, where more than 2.3 million meals are served each year at dining venues such as International Village, the first college/university dining facility in the country to receive both the 3-Star Green Restaurant distinction and LEED Gold status. Northeastern has also been included on The Daily Meal’s list of “Best Colleges for Food in America” since 2015.

Northeastern had been one of the universities invited to be a member of the Menus of Change University Research Collaborative helping to accelerate efforts to move Americans toward healthier, more sustainable plant-forward diets using the Menus of Change principles. These principles have accelerated sustainable operating procedures across the Northeastern campus, including the use of imperfectly delicious produce, a campus-wide composting program, a trayless initiative in residential dining locations and the removal of plastic bags from the take-out dining venue. Since launching in 2015, both produce and whole-grain consumption have increased across campus, while sodium use and sugary beverages have decreased.

Digital signage and the latest social media platforms are used to promote special campus dining programs, including events in the Xhibition Kitchen, a state-of-the-art display kitchen that has hosted more than 500 interactive cooking events such as guest chef demonstrations and cookbook signings. They have included more than 30 James Beard Award winners, among them Jacques Pépin, Dana Cowin and Dorie Greenspan, as well as television personalities like the Food Network’s Alex Guarnaschelli and Robert Irvine, Top Chef’s Gail Simmons and Kristen Kish and Travel Channel’s Adam Richman.

The Xhibition Kitchen is also utilized as a space for hands-on teaching events as part of Northeastern’s membership in the Teaching Kitchen Collaborative. The Northeastern Dining culinary team utilizes the principles of Menus of Change to design interactive cooking programs perfect for small, 10- to 20-student classes. These experiential learning classes teach life-long skills to students.

Other annual signature events include pumpkin carving and gingerbread house contests in the fall, to Mardi Gras and “Lobstah Night” celebrations in the spring. The spring semester concludes with Educate Your Palate, a specially themed dinner designed to bring students a unique culinary experience that is unlike anything typically seen on a college campus.