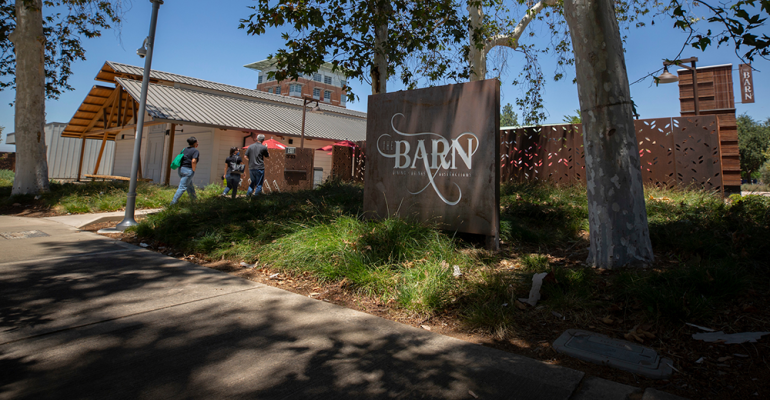 The Barn restaurant and patio bar opened in mid-July on the campus of the University of California-Riverside (UCR), operating two of its four serving stations—Hot Table and Grill—for lunch during the week and the Grill for Happy Hour. Also open is the Barn’s patio bar, which offers beer and wine, including five separate craft beers infused with citrus grown at UCR’s Givaudan Citrus Variety Collection.

To further build traffic, the venue is offering BBQ Night specials several times a month that serve family-size barbecue meal deal platters for preorder and curbside pickup. A hundred were sold at the first one with a check average of $70.

The first BBQ Night actually predated the Barn’s reopening and was intended to promote it. There were two more through mid-August.

“It’s truly a contactless experience,” says Marcus Van Vleet, director of the Barn complex. “People order online for either two or four people, then pick up between 3 and 6 p.m. on Friday. We designated parking spots in the lot adjacent to the Barn, and you just call the number once you park and we’ll confirm your order, then take it out to you. The feedback we’ve gotten so far tells us we have to do this at least twice a month.”

A third section of the venue, called the Stable, is a modified full-service concept with an indoor bar restricted to faculty and staff that currently is not open, while the outdoor bar area is open to all customers. The Stable area also includes a stage “and our plan is that when we’re allowed to do so, we would host concerts,” says Van Vleet. “It will be an intimate concert venue with a capacity of 500 to 750 people.”

The restaurant has indoor seating, but this is currently not open because of COVID-related restrictions, so all seating is in the outdoor area, where the tables and seats are separated sufficiently to conform to state regulations. All the food from the two currently open stations are served on single-use plates or packaged up for takeaway.

The customer base over the summer consisted of faculty, staff and whatever students were on campus along with some off-campus traffic.

“We have a small percentage in the Riverside community who either are UCR alumni or who remember the old Barn, and once they found out it reopened, they come to see it out of curiosity,” Van Vleet says. “We’re getting a lot of great feedback—they can’t wait for normal times to come back so we can open the entire Barn, but for now they’re excited that it’s just open.”

The Barn has been a campus institution for a century, tracing its history back to 1917 when it opened as a stable for the Riverside Citrus Experiment Station, a predecessor to the university. When UCR launched in 1952, it became a dining venue and later an event center hosting concerts by national acts until it closed in 2015.

The reopened venue has four food outlets, but the salad station and deli will remain closed until further notice because of COVID restrictions. A mobile order app for the stations is in the works.

Of the two that are open, the Hot Table station is on a five-day cycle while the Grill has standards like burgers and chicken sandwiches along with a Barn Bites menu for Happy Hour noshing. Happy Hour starts at 3 p.m. and goes until close, which currently is 7 p.m. weekdays, though Van Vleet says that can be flexed forward or back once in-person classes start and traffic patterns become apparent. But that is up in the air as UCR has not yet scheduled a date for in-person instruction to commence, so the school year will begin with online classes and a minimal on-campus population.

“There is a small demand for freshmen who want to live on campus in the fall, so we’re hoping we see a bit of an uptick in business [then],” Van Vleet offers. “What I see now gives me hope that in more normal times, we’re going to have a very successful business unit here with the Barn.”