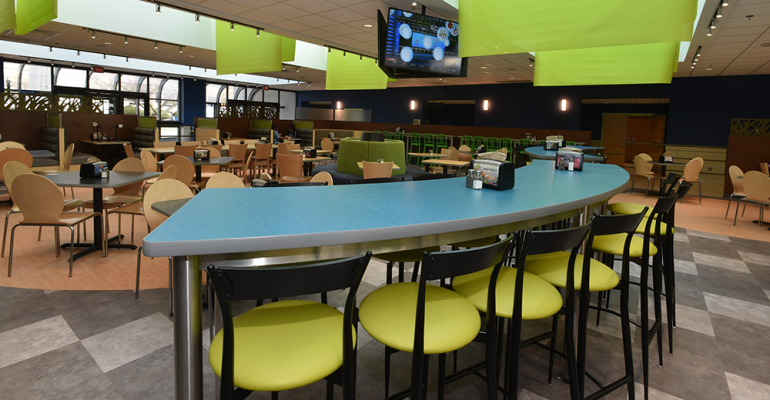 Earlier this year, dining services provider Sodexo renovated the main dining space at Neumann University in Aston, Penn., into a welcoming dining and third space for students, faculty, staff and campus guests. The facelift included a brand-new layout and enhancements like a revamped International cuisine station that now allows students an easier view of how their food is being made to order and an extended My Zone area to include a hot and cold bar instead of just the ready-to-eat microwave option. My Zone is a concept developed by Sodexo to serve customers with food allergies.

In addition, a completely renovated grill station now offers kiosk ordering and expanded customization options, the hot entree station now has a built-in carving station to showcase dinner proteins and the expanded pizza/pasta station has been modified to better showcase the varieties of pizza available and to offer options to customize pasta dishes.

While the dining hall renovation was taking place, temporary dining facilities were erected in the Bruder Gym, which is located across from the main dining hall kitchen and consequently the best place from which to transport food back and forth. Facilities were set up in the gym for My Zone, international cuisine, pizza/pasta, deli, hot entrée, salad bar, dessert and hot entrée stations as well as an area from which to serve hand dipped ice cream, milk shakes and smoothies.

To effect all this, the infrastructure included not only a POS system but a utility upgrade to allow the gym to run seven refrigerator units, three induction burners, an industrial sized blender and three microwaves.

What follows is a photo tour of the new dining facility.