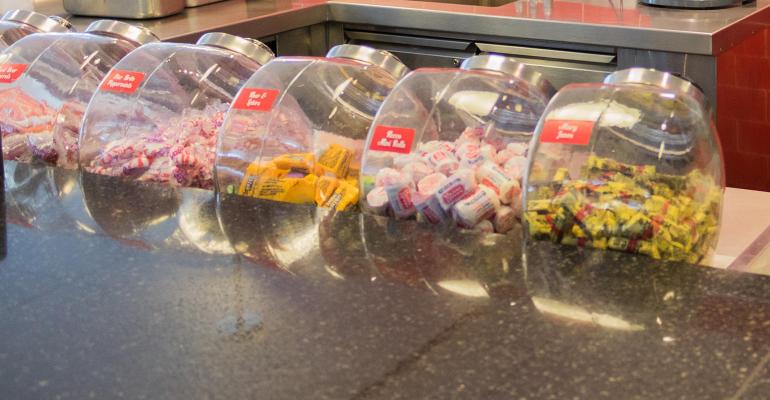 Students can not only get classic fare like burgers and shakes at Miami University’s Pulley Diner, but also a selection of 16 all-time favorite candies.

Retro style diners are not unknown on college campuses, but the Bob & Doris ’52 Pulley Diner on the Oxford, Ohio, campus of Miami University has one sweet extra thing going for it: a candy bar with old fashioned glass jars that offers 16 different individually wrapped candies for a collective 35 cents an ounce.

Choices include perennial favorites like Airhead Minis, Atomic Fireballs, Root Beer Barrels, Star Brite Peppermints, Caramel Squares, Chick-O-Stick Nuggets, Lemonheads, Tootsie Fruit Rolls and Jawbusters. Currently, the selection is static but the counter may eventually offer a candy of the week and/or candy specials themed to holidays like Halloween and Valentine’s Day, says Geno Svec, senior director of food & beverage, who came up with the idea of the retro candy bar while driving home from work one day. The milkshake counter at Pulley’s also sells bottles of classic sodas that can be used to make ice cream floats.

“I was looking at all my square footage and thinking about what revenue I’m generating off it, and how this space [fronting the Pulley Diner’s milkshake counter] was not being utilized properly,” he recalls. “I needed something that was going to draw attention to it, and putting 16 candy jars on the counter up front has definitely drawn some attention!”

The jars were prompted by a childhood memory: “I remember as a kid going into candy shops and seeing glass jars and I thought, ‘Why not?’ Our investment was minor and in fact we’ve already got it all back!”

The Candy Bar debuted in late February, and has been drawing the kind of attention Svec visualized as students flock to it like…well, like kids to a candy store.

The milkshake counter at Pulley’s also sells bottled grape, strawberry, root beer and cream sodas, which can all be turned into ice cream floats on request. In fact, the root beer float is the station’s No. 1 seller, Svec offers.

Pulley as a whole offers a classic ’50s diner menu with traditional fare like those milkshakes and floats as well as burgers, fries, chili, grilled cheese sandwiches and traditional breakfast favorites like pancakes, hash brown potatoes, eggs, bacon and biscuits with sausage gravy.

One of the busiest outlets on campus, the diner is open 24/7 and draws a respectable crowd even in the nighttime hours, Svec says: “We stay busy until about 2 a.m. and then around 4:30ish it starts picking up again for breakfast.” The candies are available for a collective 35 cents an ounce.

Pulley is one of eight retail dining venues in Miami’s Armstrong Student Center, a campus hub located in the center of the school’s grounds. Among the other options are three recently opened concepts: Café Lux, Red Zone and Toasted Bagel.

Café Lux is a European bakery café concept specializing in house-baked pastries and offering branded coffees from Columbus, Ohio, based roaster Crimson Cup, while Red Zone is a sports bar-themed concept, except without alcohol service, that menus stadium type of fare where customers order at a concession stand-style window. The specialty is a line of hot dogs ranging from a plain all-beef classic and the chili dog with onions, shredded cheddar cheese, mustard and Cincinnati-style chili—a regional favorite as the Queen City is less than an hour’s drive away—to ones topped with mac and cheese (mac & dog), pulled pork, bacon, smoked ranch dressing and baked beans (sweet & smokey dog) and even fried mozzarella sticks, Parmesan cheese and marinara sauce (mozza dog).

Toasted Bagel offers build-your-own bagel sandwiches with an array of protein, spreads, cheese and veggie/fruit options. It replaced an older concept called Traditions that menued traditional entrée-type fare like roast chicken and pork and was underperforming.

All the concepts were developed in-house. In fact, the Miami campus has only one outside brand, Starbucks. Other self-developed brands in Armstrong include Sundial Pizza Co., the Asian-themed Mein Street, build-your-own sandwich/bowls concept Haines’ Boulangerie and Miami Ice with its selection of specialty coffees, smoothies, gelatos and ice creams from local creamery Young’s Jersey Dairy.