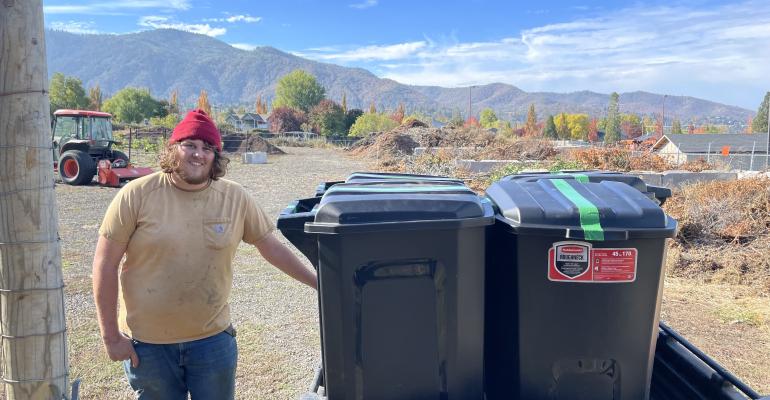 SOU pre-consumer composting program Is a win for everyone

Scraps from fruit and vegetables are returned to the farm where they were grown.

Southern Oregon University is tackling the problem of food waste at their Hawk dining commons location. And it all starts right in the kitchen, thanks to a new pre-consumer composting program.

Launched in fall 2022, the program captures fruit and vegetable scraps that accumulate during food prep - everything from carrot peels to kale stems - and would otherwise end up in the trash. Now it's tossed in designated composting bins and sent a mile down the road to The Farm, SOU's organic, student-led farm that produces healthy, sustainably harvested food for the SOU community.

That includes meals served at the Hawk. When the pandemic disrupted food supply chains, SOU dining manager Aladdin Campus Dining sought produce from The Farm as a more sustainable, more reliable alternative. "In spring of 2022, we got around 150 pounds of produce from the farm," says Aladdin Campus Dining Marketing & Sustainability Coordinator Daniel Kelly. "We call it hyperlocal. The students love it, and they value it."

Sending the scraps back to The Farm is an easy way for SOU to reduce its food waste while supporting The Farm's output. "Our residential dining program serves between 200 and 400 students a day, so we're making a lot of food," Kelly explains. "This program addresses the amount of pre-consumer waste that's been generated, and the partnership is a great deal for everyone."

As an organic operation, The Farm had a long-standing composting program already in place. But vegetable matter from SOU helped to make the compost even better. "A lot of the stuff they were processing for compost was leaf matter and wooden products, like downed tree limbs from campus, which is heavy in carbon," Kelly explains. "You need some nitrogen to make good quality compost, which is where the scraps come in. So we said, 'Are we able to add vegetable and plant matter to the process as well?' They said yes, and it was a great deal for everyone."

The initiative supports the environment too. "If you don't have your own compost or are not able to purchase organic-grade compost, you have to add chemical fertilizers [to crops]," Kelly explains. "Studies show these fertilizers have an intense amount of chemical runoff for specific nutrients that then contaminate water systems."

The partnership is a highly sustainable closed-loop system. "The produce is grown on the farm, we take it, then we take the scraps back to the farm to turn it back into compost," says Kelly. In addition to growing produce for SOU, the Farm provides fruits and vegetables for a community supported agriculture (CSA) program, a weekly farm stand, and a handful of local public schools. "Being able to produce our own compost that has nutrients that the soil and plants need, that don't contribute to the contamination of water systems, is vitally important," Kelly says.

Implementing the new composting program was relatively straightforward. "It was a transition period because folks are used to throwing everything in the waste bin. So we had to educate staff on what could and couldn't be composted," Kelly explains. Small, green composting bins were placed on prep tables in the Hawk's kitchen. (The bins are lined with compostable liners to meet health code requirements.) Rather than putting produce scraps in the trash, kitchen staff now place the scraps in the green bins.

When the bins fill up, they're emptied into a larger trash bin. A staff member drives the scraps down to The Farm on Mondays, Wednesdays, and Fridays. The Hawk's kitchen typically sends about 100 pounds of scraps to The Farm each week, though numbers tend to drop over the summer and winter break when most students leave campus. From there, Farm staff and volunteers place the scraps on the Farm's existing compost piles, layering it with leaf litter to encourage the material to eventually break down into nutrient-rich compost.

Looking ahead, Aladdin Campus Dining hopes to source more produce from The Farm and continue expanding its sustainability initiatives. The farm's output tends to be greatest during the summer, when students are off campus and dining demand is low. "We're working on a system to bridge the gap and put that produce to use when we most need it," Kelly says. "Ideally, we want to be able to take as much as they can grow."