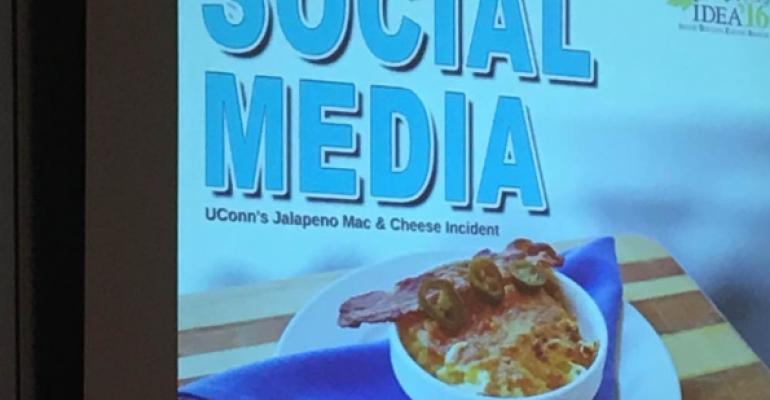 Real talk at a NACUFS session about what really happened after a viral video pushed dining services into the spotlight—and a new set of rules that came from the ordeal. Plus, get the recipe for the infamous jalapeño-bacon mac ‘n cheese.

It just wouldn’t go away. That was Director of Dining Services Dennis Pierce’s sinking feeling, day after day, as UConn Dining remained the white-hot focus of YouTube views, tweets, retweets, Facebook posts, late-night monologues and relentless media attention in the days and weeks following a student’s drunken confrontation with the dining staff over a dish of jalapeño-bacon mac ‘n cheese.

While certainly never a good situation, alcohol-fueled incidents do happen on a college campus, and sometimes in dining halls such as at Union Street Market. But now, with most people carrying video cameras in their phones and a culture that’s always hungry for the next scandal, those incidents can take on a life of their own.

The UConn dining team learned this, and a slew of other valuable lessons, the hard way. The good news is Pierce and Culinary Operations Manager Robert Landolphi graciously shared those lessons (and the recipe too!) at an afternoon session at NACUFS’ annual meeting last week in Anaheim.

Pierce played the YouTube video as the session started for those few in the audience (presumably from Living Under a Rock University) who hadn’t seen it. The video, which has been viewed 1.5 million times, is titled “UConn Drunk Kid Wants Mac ‘n Cheese.” That pretty much sums up the situation. The incident began when a student brought a 40-ounce bottle of beer into the dining hall, and when he was told he couldn’t enter, launched into an expletive-laced tirade that got physical.

Throughout the cringe-worthy nine minutes it took for police to appear on the scene (more on that later), another student captured it all on film: the cussing, the pushing, the belligerent threats against staff members who tried their best to keep cool and eventually the student pinned to the floor by a chef and being led out by police, all the while ranting about the jalapeño-bacon mac ‘n cheese. An ugly incident, to be sure. Within hours, the YouTube video posted by the budding videographer had hundreds of thousands of views all around the world.

At that moment, a Sunday night, Pierce was asleep at home, blissfully unaware of anything out of the ordinary. He wouldn’t find out until later Monday morning, his answering machine lit up like a Christmas tree with messages from reporters all over the country.

That was one of the lessons learned during UConn’s social media crisis: Don’t let phone calls from the media be the first time your boss learns that your dining program is famous—or in this case, infamous.

The communications team got involved right away and staff were advised to direct media inquiries to a single spokesperson: Pierce, who used a prepared statement to answer all inquiries.

Soon, the student, Luke Gatti, issued a video apology. Later, he was placed on probation and he no longer attends UConn. The national attention eventually died down, the public’s short attention span soon occupied by other news, other scandals. Meanwhile (silver lining alert!), sales of the infamous jalapeño-bacon mac ‘n cheese had gone through the roof. One intrepid reporter even filed a Freedom of Information Act request to force UConn Dining Services to share the recipe. Taking advantage of this, we share it with you here.

Another silver lining from the incident is a new set of best practices now being used at UConn, devised to prepare dining staff for confrontations that might occur, and then how to respond via the media and social media in the aftermath. Here are some of the lessons learned: