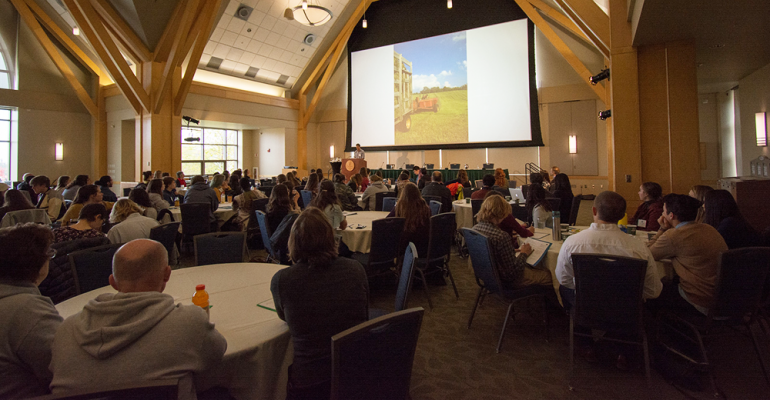 Meeting drew 143 attendees, including 83 college students from various colleges in Vermont, who also enjoyed an “eat the loop” sustainable meal.

Sodexo has been an active agent in promoting the local economy in the state of Vermont for the past four years through its Vermont First initiative, which is designed to grow market opportunities for in-state producers, stimulate job growth and optimize working land in Vermont. (A similar initiative called Maine Course is now underway in nearby Maine.)

The results so far have been quite positive, with the company employing over a thousand Vermonters who earn in excess of $20 million in salaries in nine in-state colleges, two corporate dining sites and two hospitals. In all, Sodexo serves some 26,500 meals on an average day in Vermont.

The company also now has vendor relationships with 195 Vermont producers and spends over $2.5 million on local products, which accounts for 13.74 percent of its total food purchase spending in Vermont.

The Symposium was held Sunday, Oct. 28, in the Davis Center of the University of Vermont (UVM), which is a prime example of Sodexo’s sustainability efforts in the state.

The event was attended by 143 individuals, including 83 students from not only UVM but a number of other area schools, including Champlain College, St. Michael’s College, Northern Vermont University-Johnson, Middlebury College, Green Mountain College, Sterling College and the New England Culinary Institute. Other attendees came from area food studies programs as well as Vermont-based producers and prospective employers.

“It is incredibly rare for students from across the state to gather to not only celebrate farm to institution, but to also make the connection between studying food systems and pursuing a career in that field,” suggests Annie Rowell, Sodexo’s Vermont First coordinator. “There are over 6,550 new food system jobs in Vermont since 2010. As this trend continues, Vermont is in the unique position of harnessing and directing the growing interest of students studying food systems towards food-related employment within the state,” she explains.” Taking Root helped students navigate the next steps of their career path.”

The keynote speaker for Taking Root was Ben Hewitt, a Vermont-based author of books like The Town That Food Saved and Making Supper Safe, while the presentations focused on topics such as why farm to institution is important, innovative work happening in Vermont’s food system, career paths of many of Vermont’s leading entrepreneurs and thinkers, the resources available at each campus for students to pursue food systems-relevant coursework as well as food-related employment and current food-related job opportunities.

A highlight of the day was an “Eat the Loop” meal, which was produced specifically with sustainability and waste reduction in mind and featured products from numerous local vendors and producers. The centerpiece of its menu was a Jamaican curried goat dish served with beans and rice, served courtesy of local vendor Vermont Chevon, which is trying to build more local demand for goat meat and has worked with Sodexo through Vermont First on a number of special events the company has catered.

In addition to the goat dish, the Eat the Loop menu also included vegan curried tofu, a charcuterie and cheese board, pulled chicken salad on a baguette, a Vermont burger with home fries, grilled sausage, a roasted vegetable medley, Vermont slaw, Buffalo chicken and roasted vegetable pizzas, fish tacos and, for dessert, a caramelized apple compote on a whole-grain pancake with ice cream.

“The event was successful in bringing together a strong swath of change agents for some important conversations—and good food—and, importantly, for highlighting some plausible paths forward for folks at various points in the food system,” summarized Joe Bossen of Vermont Bean Crafters, one of the vendors who contributed to the curried goat dish.