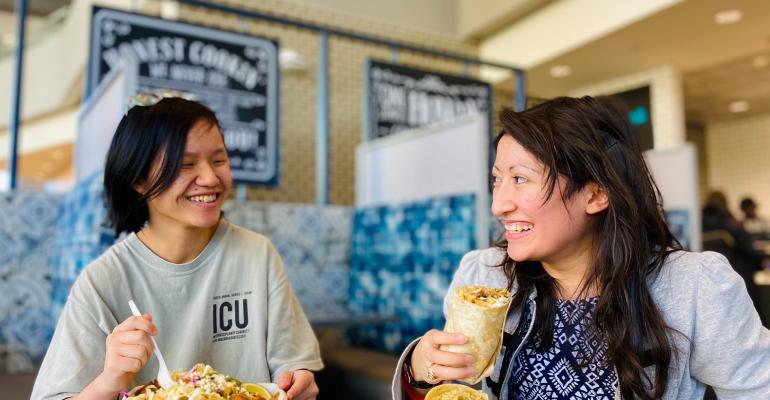 New dining venues, a robotic pizza station, the advent of remote ordering across campus and a Just Walk Out retail store at the football stadium will greet returning students this fall.

Texas A&M University is elbowing its way to the forefront of campus dining innovation, upgrading and expanding its concept mix, embracing cutting edge technology and expanding access and convenience for what is expected to be a full house of students this fall. The campus dining program operated by Chartwells Higher Ed opened a major new multi-concept dining venue last spring and plans to open more locations this fall, when it is also introducing mobile ordering and self-checkout kiosks at multiple retail locations.

Also part of the move to using cutting edge technology was introduction this past spring of the first robotic pizza assembly station from vendor Picnic in a U.S. college campus dining facility, and this fall will see the debut of checkout-free food and beverage stores equipped with Amazon’s Just Walk Out technology at Texas A&M’s Kyle Field campus stadium—the first such stores in a collegiate sports venue—by concessions firm Levy, which operates food & beverage at all Texas A&M sports facilities and like Chartwells is a unit of Compass Group North America.

The changes and additions will serve a full enrollment of over 70,000, including some 12,000 students who will be living on campus in what is expected to be a “normal” environment free of just about all pandemic-related restrictions and limitations, something Texas A&M already more or less already achieved even last school year. 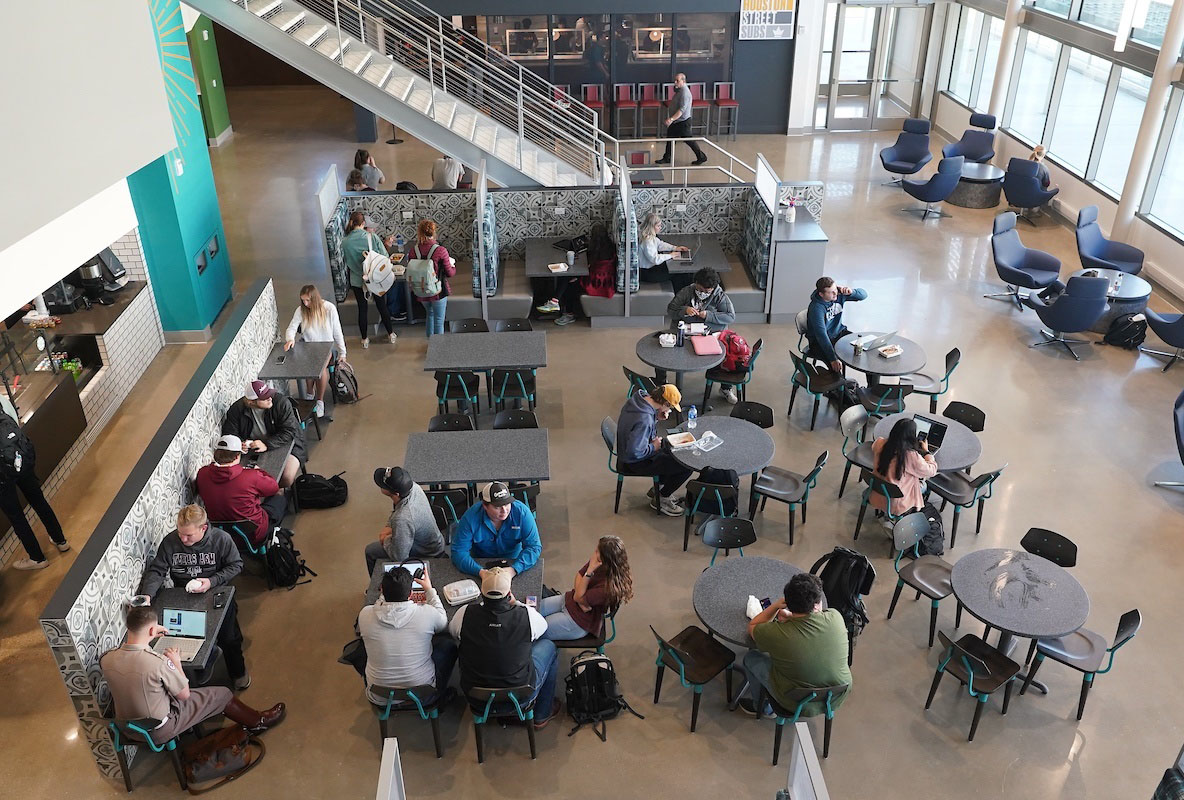 With the new Food Hall, West Campus now has about as much seating capacity as the Memorial Student Center, Texas A&M’s student union complex.

The major recent addition to the campus dining mix was the West Campus Food Hall, which opened last spring with three concepts—Copperhead Jack’s, Houston Street Subs and Chick-fil-A—and will add a fourth (a Shake Smart unit) this fall.

“West Campus had a fairly dated food court that was very popular but very small as it had been built for another time,” explains David Riddle, resident district manager for Chartwells Higher Ed. “We needed to create more public space on West Campus around food because they don’t have as much as the main central campus does.”

Chartwells moved some of the popular concepts like Chick-fil-A from that venue over to the new building and added others, “so students not only gained some new food concepts but also a lot more seating,” he notes, “and it’s been packed.” Looking at the overall counts, Riddle says West Campus now has about as much seating capacity as the Memorial Student Center, Texas A&M’s student union complex.

West Campus will have even more dining options this fall when the food court that West Campus Food Hall supplanted reopens as the new Ag Cafe with a fully licensed Starbucks unit and a cashier-less market with a Wild Blue Sushi made-to-order sushi station.

“In the end, we didn’t lose anything and instead expanded operations as West Campus has grown,” Riddle offers. 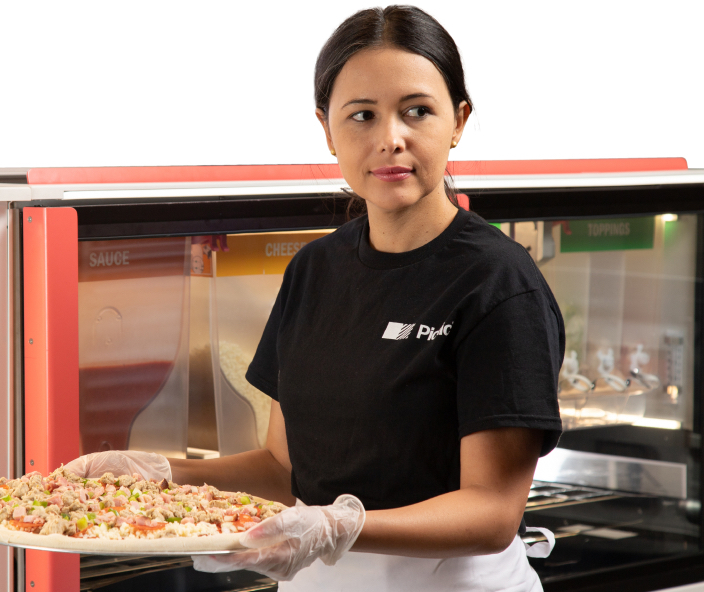 The Picnic automated pizza station consistently makes pies as good as or better than was previously done by hand.

The Picnic automated pizza station was the product of the program’s need to find solutions in the midst of the industry-wide labor crunch of the past year, he says. “We were looking for ways to keep up with student demand without having to make any compromises in terms of quality, so we were looking at a lot of different technologies. [Picnic’s pizza robot] made a lot of sense because it does make a pizza as good as or better than I can make consistently. We didn’t want something that was simply faster, but one that really also gives us the same or better quality than we can do by hand.”

It doesn’t hurt that Picnic’s CEO is a Texas A&M engineering graduate, giving the program not only an excellent tech solution but also an alumni tie-in. The robotic unit also generates interest not only among potential customers but potential student workers, Riddle adds.

“Typically in my experience, anytime we introduce new technologies on campus, it does generate an interest, especially with engineering students and students who are studying artificial intelligence, computer science, etc., so we like to bring that into the program because we do hire a lot of student workers and, oftentimes, student workers who are interested in that field will want to work with the technology.”

Speaking of technology, there will be three Just Walk Out stores at Kyle Field when the season kicks off Sept. 4, with perhaps more to come down the line, says Chris Warner, vice president of hospitality & strategy for Levy at Texas A&M. “This will our proof-of-concept/beta test that will help us make an assessment on things like adoption rate, with the long-term goal of expanding it if the concept works,” he says.

The stores will stock beer, wine, bottled water and ambient snacks like candy and peanuts along with refillable cups that fans can use at fountain stations around the stadium. IDs for alcohol purchase will be checked manually outside the store. Entry will be through either running a credit card or an Amazon One palm print reader (kiosks to enable individuals to sign up for an Amazon One account will be located just outside the stores).

While the check-in/check-out processes are automated, human staff will be on hand to answer questions, keep track of stock levels and monitor alcoholic beverage access. Levy is prepared to restock the stores as needed during games, Warner says.

“Under our current plan, each store will carry 3,500 beverages, including water,” he explains. “We’ll learn more about the volume needed over the first few games, but we’re ready to restock as needed.”

Meanwhile, Riddle expects tech solutions in the Chartwells operations to expand going forward and says he’ll be especially interested in how the Just Walk Out stores at Kyle Field do with an eye toward possibly opening similar venues on campus in the second half of the 2022-23 school year.

“We’re always looking for the next thing that will help drive student experience first and foremost through making food more accessible, increasing speed of service and expanding hours of operation,” he says, citing cashier-less platforms as a good example.

“Even if sales are low at a particular period of time when you might not be able to support staff, you can in theory still run these locations 24 hours a day,” he notes. “We like technology that can give us more hours of operation or provide more speed of service, which is why we are doing our mobile ordering launch this fall.” 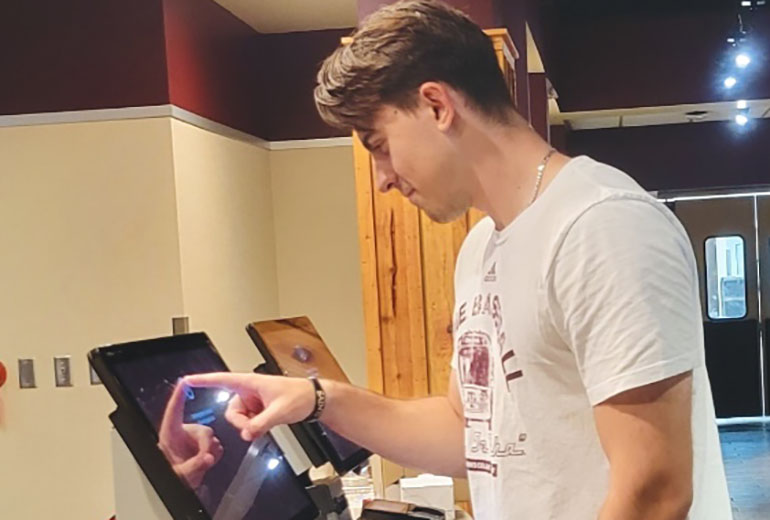 Self-order kiosks are coming to retail dining locations with fixed menus where there never has been a lot of customer interaction with staff.

Self-order “where it makes sense”

While the dining program has done a complete overhaul of its point-of-sale system technology, replacing 140 points of sale, it had waited until it could integrate the mobile system with the student meal plans so they could use it not only to place orders but get real-time information on things like account balances.

In addition to adding mobile ordering, about 40% of the campus is converting to self-order kiosks “in those locations where it makes sense,” Riddle offers. This are locations with fixed menus where there never was a lot of interaction, he explains, “where kiosks make sense.” However, “in some other locations, we thought about having kiosks but didn’t want to lose a certain ‘experience,’ such as in a sub shop or burrito concept where you walk down the line and pick your ingredients and see it being made. We didn’t want to lose that, so those locations stay traditional.” Those locations will offer a mobile order option from phones, “but we’re keeping that personal interaction when you’re there.”

Some kiosk order outlets will also have table delivery to provide a certain level of personal contact between customers and the dining team.

These are all applicable to the retail dining program, but Texas A&M also operates three all-you-care-to-eat residential dining halls, one mostly catering to the school’s Corps of Cadets, though it is open to all students. These will continue to function on a traditional basis (no remote ordering, for example), with menu concepts updated to reflect changing student tastes and preferences.

“We’re seeing students wanting more international flavors, particularly East Asian and South Asian, so we’re including more of that into our menus