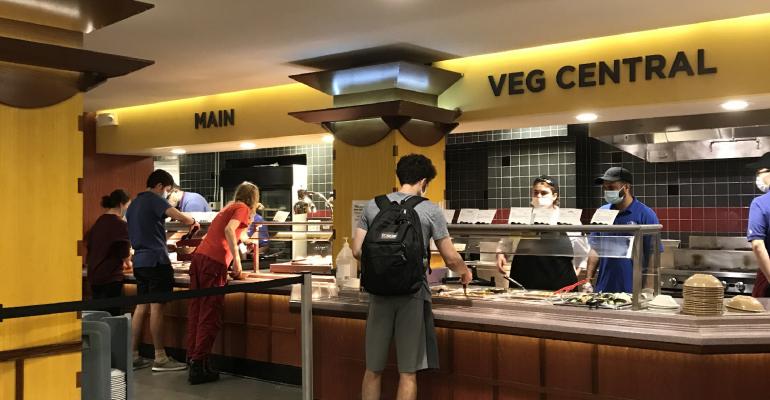 Carmichael Dining Center at Tufts University in Massachusetts has been rebranded as Fresh at Carmichael with a new menu that is peanut-, tree nut- and gluten-free in order to provide food options for students with food allergies or dietary requirements. In addition to its allergen-friendly menu, Fresh at Carmichael—as well as Dewick-MacPhie, the other residential dining hall on campus—is also slated to become more user-friendly later this fall by adding a take-out area at its entrance that makes it easier for students to pre-order food avoid long wait times.

One of two all-you-care-to-eat dining facilities on campus, Fresh at Carmichael presents itself as a standard meal option rather than as some sort of restricted menu outlet, says Patti Klos, director of dining & business services.

“We try to make it interesting and a fresh approach with a fresh new menu without emphasizing that you can’t get gluten when you go there,” she says. “We’re not hiding it, but we want to lead with flavor and deliciousness. We want to say, ‘Here’s exciting food!’ rather than ‘Here’s what you can’t have.’”

The restrictions are confined to avoiding only tree nuts, peanuts and gluten, not other food allergens. 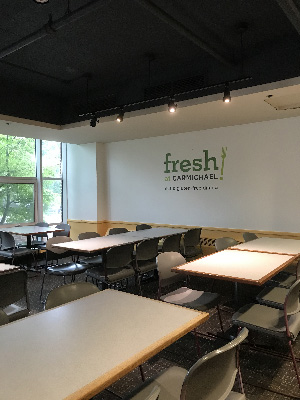 Photo: Fresh at Carmichael welcomes non-food-allergic students with appealing food while reassuring those with allergies to nuts and gluten that they can eat safely there.

“About two and a half years ago, we introduced a platform in our larger dining center, Dewick-MacPhie, that we call ALL9FREE, at a time when the USDA was only recognizing eight allergens,” Klos explains. “However, Tufts had a few years before had decided to also exclude sesame, which has since become the ninth allergen designated in the U.S. [At Dewick-MacPhie], we had converted this underused deli station into a mini kitchen that does share some food storage with other [outlets], though it does cook and serve its menu items separate from other food production.”

That had been a great addition to the program, she says, but the problem was its proximity to other stations that were serving product made with gluten, causing cross-contact issues, as well as mistakes with labeling and misidentification because of the common storage areas.

Photo: The menu at the multi-station Fresh at Carmichael is flexible, allowing each station to menu different cuisines at different times.

The three most common food allergies among Tufts students are gluten, tree nuts and peanuts, so the decision was made to concentrate on those. Carmichael was selected as the site for the allergen-free venue because it is the only undergraduate dining location on that part of campus, having with its own kitchen that is not used for anything else. Getting it ready for the conversion was a major undertaking, Klos recalls.

“We literally stripped the place—we removed all the inventory, scrubbed the storeroom and even had a professional maintenance company dismantle the conveyor belt oven in the pizza station,” she offers. “It has tile walls so those could be cleaned, but we replaced the ceiling tiles because we’d been making pizza in there for about 27 years!”

The facilities and equipment are exclusively used by Fresh at Carmichael, and it does have a staff that works there most of the time, though staff flexibility does require occasional reassignment to different campus dining locations as circumstances require, so proper Serv Safe procedures and other requirements are rigorously instilled in those who do put in hours there. 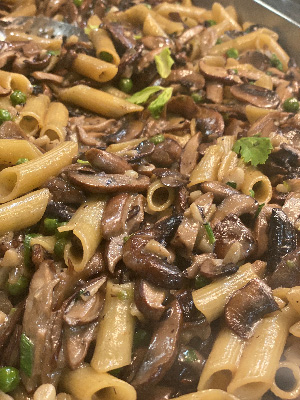 Photo: The culinary team came up with 190 new dishes such to augment those already meeting—or easily adaptable to—the nut and gluten restrictions at Fresh at Carmichael.

The menu at the new Carmichael has nearly 200 new recipes in addition to dishes previously offered on campus that either were already nut- and gluten-free or were easily modified to be so. Suggestions came not only from staff chefs but students.

Fresh at Carmichael is a multi-station servery with a grill and entrée area but the approach is flexible, allowing the separate areas to operate different cuisine concepts, such as a popular

Mediterranean bar and a ramen bar that was so popular in its first appearance that it was extended over multiple stations the next time it cropped up to handle the traffic.

Among popular college foods, pizza remains a dilemma because of its traditional gluten-heavy profile. Klos says she is exploring cauliflower-based crusts but is holding off trying it until the staff has settled in. “We want to get good at what we’re doing first, and then add on,” she suggests.

On the other hand, the culinary team did come up with a gluten-free pancake batter and “it’s unbelievable how many pancakes they’re selling,” Klos marvels.” I believe students think it’s not gluten-free!”

Mondays are meatless and include a vegetarian pho bar with broths created in-house. The rest of the time, there’s a creative variety of dishes designed to have broad appeal beyond those needing to avoid nuts and gluten.

“Mac and cheese had always been super-popular here, so we got a cauliflower version that is a big seller, probably because of the toppings we use, like pulled pork,” Klos suggests.

Not everything can be made in-house from scratch given staff and facility constraints, so the operation concentrates its efforts in areas where there is some question of nut or gluten contamination from the vendor end.

Klos is looking to launch the takeout program, labeled Carm2GO and Dewick2GO, later this fall at the two all-you-care-to-eat venues as an outgrowth of the to-go option instituted last year during the COVID restrictions, which used reusable containers students could fill and take away.

“Because of the peak demands and the small size of these locations, we got a lot of practice doing to-go and having items on our mobile app, so Carm2GO and Dewick2GO are meant to offer highly customized, really popular entrees that are only available on the app as an incentive,” she explains. “So if you don’t have time to linger or see that most of the tables are full or you just don’t want to walk around, you can just get on your app and order pickup.” The addition of outdoor seats and tents will also encourage this takeaway option

Carm2GO is scheduled to be available at peak periods, Tuesday and Thursday from 12 –2 p.m. for lunch and Monday–Thursday from 5–7 p.m. for dinner.

Tufts is seeing a full complement of students this fall, with a full capacity of around 4,100 living on campus and just about everyone attending in-person classes. Klos notes that she has 1,400 more students on meal plans this year than last.

“Last year we had about 20% of student being remote, this year we have less that 20 total students who are remote, mostly due to disability,” she offers.