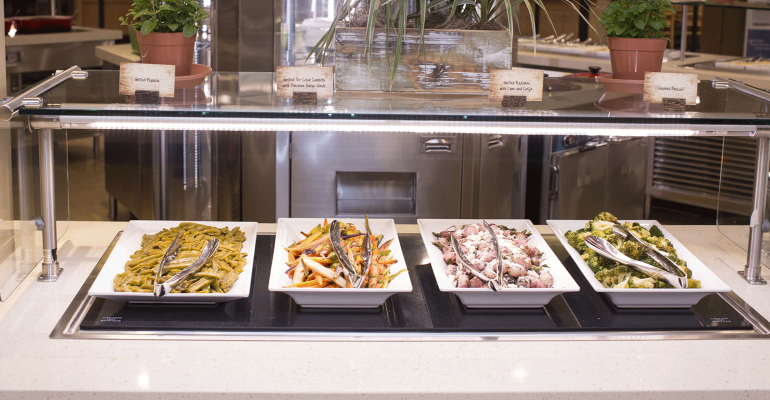 The menu mix will change daily and feature nearly two dozen different dishes—with a 75/25 split between plant-based and animal-based ingredients.

Part-time vegetarians—otherwise known as flexitarians—now have a new dining option at the University of California Los Angeles (UCLA)’s De Neve dining hall. It’s located in the center of the room and serves between 12 and 15 composed salads, six sides that could be anything from collard greens with a ham hock to fried okra, as well as a handful of “hot pots” like black-eyed pea chili verde or Cajun shrimp and quinoa casserole.

“Flexitarianism is a balanced approach to eating with an understanding that a healthy diet is inclusive of consuming fibers and legumes while reducing animal proteins,” says Al Ferrone, senior director of dining services. “It’s what students are asking for so we wanted to create a dedicated station where meat would not be the star of every dish. Instead it’s an ingredient and it’s used sparingly.”

Previously, the space housed a traditional salad bar. But $250,000 and a few months’ work transformed it into a modern and functional modular station with a center tower of refrigeration and plenty of space to display both cold and hot dishes.

“We went out of our way to really merchandize the flex station,” says Ferrone, adding that the concept opened at the beginning of the 2017 winter quarter. “Students eat with their eyes first, so we have lots of beautiful dishes that showcase the food—things like stark white square pan and Staub cast-iron pots.”

De Neve features bold flavored, diverse, colorful selections of cuisine inspired by the street foods of the Americas that span as far north as Canada to the southern “tip” of Argentina. Both the dishes served as well as the daily menu mix at the new flex station fit in perfectly with the hall’s theme and were designed with color, freshness and variety top of mind.

“Everything is fresh,” says Feronne, who has been with UCLA for 18 months. “There are no cans whatsoever. We’re trying to also get away from leafy salads and offer lots of probiotics and hard leafy greens that are perhaps braised or simply prepared really deliciously. We want this concept to be all about flavor and natural foods prepared well.” To measure the station’s success within the 5,000 to 6,000 covers done daily in De Neve, Ferrone plans to compare the percentage of animal protein consumed on a per person basis from last year with the same measurement from this year.

Marketing of the new station has been especially tactful. “We don’t want to over promote it as a ‘healthy’ station,” says Ferrone. “That will likely turn many students who would otherwise really enjoy these dishes off. We simply want to showcase the menu and make note that animal proteins are only a small part of the mix.”

Throughout the build and opening of this concept, the biggest challenge, according to Ferrone, has been the menu mix.

“We worked very hard on getting the rotation right to ensure that there would be lots of color and variety,” he says. “To succeed, it has to have visual appeal—and it does.”