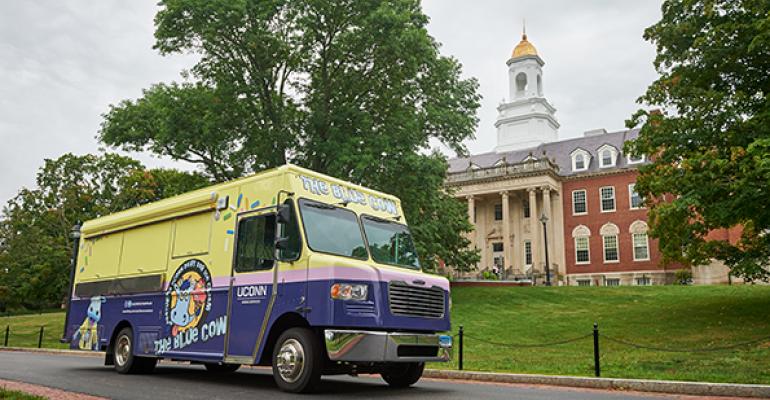 One of the country&rsquo;s largest dining operations opts for four wheels instead of four walls.

Later this week, the University of Connecticut in Mansfield will roll out two new food trucks. The first, dubbed Food For Thought, features a globally inspired taco menu (for now). The second, an Ice Cream Truck, features ice creams made by UConn’s own Dairy Bar.

“We’ve been working on the details of these two food trucks for nearly three years,” says Dennis Pierce, director of dining services. “It’s critical for us to do it right the first time.”

Food For Thought is outfitted with a full kitchen including fryers, a four-burner stove, warmers, steam tables, a grill and plenty of refrigeration and holding space.

“For the launch, and the time being, the menu will feature six different tacos priced at either $6.95 or $7.95,” says Chuck Couture, assistant director retail operations, who has spent the past two years studying campus food truck culture. (This meant visiting other university trucks to learn the pros, cons, must-dos and must-don’ts.) “Over time, the menu will evolve. That’s why we built the truck the way we did. We can produce any type of food from it. In theory, it could even serve as a satellite kitchen if we need to close a brick-and-mortar outlet for a renovation.”

“Many of the menu choices are available with vegan chicken or gluten free,” says Pierce, noting that these modifications are important to the students and to dining services. “Our Manager for Culinary Development, Rob Landolphi, developed the menu and will continue to evolve it over time alongside a dedicated food truck manager and two chef assistants.”

Food For Thought will park at special events and around campus at night. Like most trucks, it will announce its presence via social media.

UConn’s Ice Cream Truck will announce its presence via social media, too. It will also broadcast music—the Husky fight song, to be specific—from onboard speakers to reel in customers.

“The Ice Cream Truck is a spin off of our retail outlet called The Blue Cow where we sell ice creams made at UConn’s Dairy Bar,” Couture says. “We carried the logo and theme from The Blue Cow over into the design of the truck.”

Both the retail operation and its food truck purchase ice creams from UConn’s Diary Bar, which manufactures ice cream according to its original recipe from the early 1900’s. (Today, over 200,000 customers visit the Dairy Bar every year to enjoy the different flavors of freshly prepared ice cream treats.)

The truck, which has two generators to keep things extra cold, will have fewer options than the retail outlet—around 10 as compared to 26, notes Pierce—but it’s built for speed.

“The ice cream truck will share staffing with our retail shop, so training shouldn’t be too intensive,” Couture says. “It’s mostly students, but we also have one dedicated staff person who drives both trucks.”

Beyond offering unique and delicious food on the go, one of the things other schools warned UConn about was staffing.

“Everyone told us to be very conscious of how we staff the trucks,” Couture recalls. “Space is limited, but efficiency and speed are really important. Less has to be more.”

Both trucks will be cash-only operations with the goal of generating further revenue for the department.

“They also told us to make sure we were unique,” Pierce says.

So, to make sure Food For Thought makes students think (and maybe scratch their heads wondering what they heck dining services was thinking), it has committed to selling one wacky, off-the-wall item: roasted crickets.

“With food trucks, oftentimes the crazier the menu, the longer the line,” Pierce says. “So we’re going to offer roasted crickets, which taste a lot like sunflower seeds, as a topping for students who want them.”