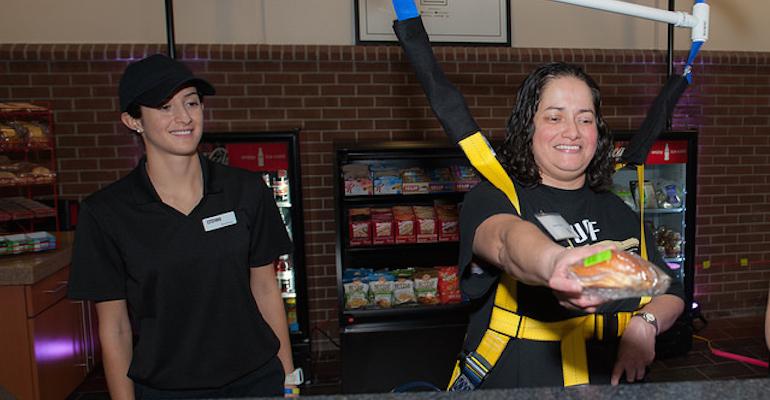 Knights on the Go at the University of Central Florida incorporates a specially designed harness system that allows workers with motor impairments to move and function.

Knights on the Go Café in the atrium of the Health & Public Affairs I building on the Orlando campus of the University of Central Florida (UCF) is a typical campus grab-and-go outlet, offering various packaged sandwiches and salads along with fresh fruit, snacks and beverages to customers looking for a quick and convenient meal stop.

What makes the café different and somewhat unique, however, is the counter staff serving those customers. Currently, two of the Knights on the Go staffers have conditions that hamper their ability to move.

Nevertheless, they are able to function effectively and safely thanks to a specially designed harness system developed at the University of Delaware (which also has a similar café) that assists mobility for individuals with brain and spinal injuries, strokes and other motor function hampering conditions. The harnesses not only give the staffers mobility to move around the behind-the-counter space but also supports them from falling and possibly injuring themselves.

The harness system was developed by Dr. Cole Galloway at the University of Delaware and migrated to UCF thanks to Dr. Jennifer Tucker, who had collaborated with Galloway. “We had a number of conversations about areas for collaboration,” Tucker says, and Knights on the Go was one result.

“It’s relatively low-tech,” Tucker says. “There are other technologies that have much more machinery to it. It’s four poles and then there’s a track system with a frictionless e-ring, and what that track system does is it allows the individual to walk freely anywhere in the 10-by-10 space—diagonally, front to back, wherever they need to go in that space.”

Working with the disabled staffers are students from the physical therapy program hired by Aramark for the café, along with other students with some experience in healthcare settings. The movement-impaired staffers generally work the counter taking orders and retrieving the items. The café has no onsite prep or hot beverages as a branded Starbucks station is located nearby.

The space was unused previously but is located in a space where up to 7,000 students pass by weekly, affording plenty of sales opportunities.

The current mobility impaired staffers came through local physical therapy programs. “We see a tremendous need,” Tucker says. “What happens for individual who have had a traumatic brain injury or stroke is they go through traditional therapy and then once they’ve exhausted therapy, there’s not really a place for them to go.”

Opened Feb. 1, the café itself is managed by Aramark, which operates campus dining services at UCF, one of the country’s largest campuses in terms of both overall enrollment and the number of students residing on campus. It is open 9 a.m. to 2 p.m. Monday through Thursday and 9 a.m. to 1 p.m. on Friday.

“The thing that has been most exciting for me as a therapist is to see individuals outside of healthcare have a rewarding and mutually beneficial relationship with individuals who have disabilities,” Tucker says. She notes that the social opportunity afforded by working the counter is especially valuable for the staffers as it gives them a chance to interact outside the therapy environment.

UCF is contemplating opening more café with a similar approach, as there are more therapy patients who might be candidates for the positions.

Tucker says the equipment requirements are minimal as the harness system does not require any special structural modifications. “It takes about an hour and a half to put it up,” she says.