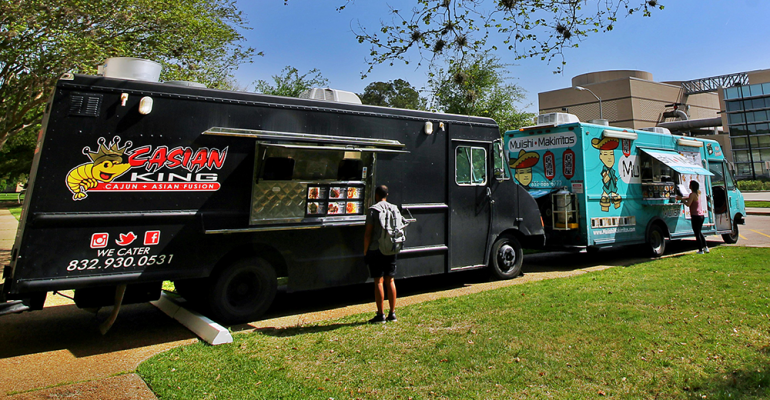 What started seven years ago as a temporary measure is now an established, popular part of the school’s foodservice program.

Back in 2012, the University of Houston (UH) embarked on a major renovation of its University Center (now Student Center), which necessitated the closing of the venue’s food court for a couple of years. As a temporary fix to fill the gap left by the closed food court, the school and its dining services partner turned to what was then a fairly out-of-the-box notion: inviting commercial food trucks to come to the campus to serve students.

Today, that temporary measure has become an established, popular and significant part of the campus dining culture at UH as the original three trucks have now swelled to 13 that rotate through six sites scattered around the campus, providing a lunch option between 11 a.m. and 3 p.m. weekdays during the school year.

But it’s not just lunch anymore either as the truck program now also operates in the residential areas of campus from 10:30 p.m. to 2:30 a.m. Monday through Thursday during the school year. 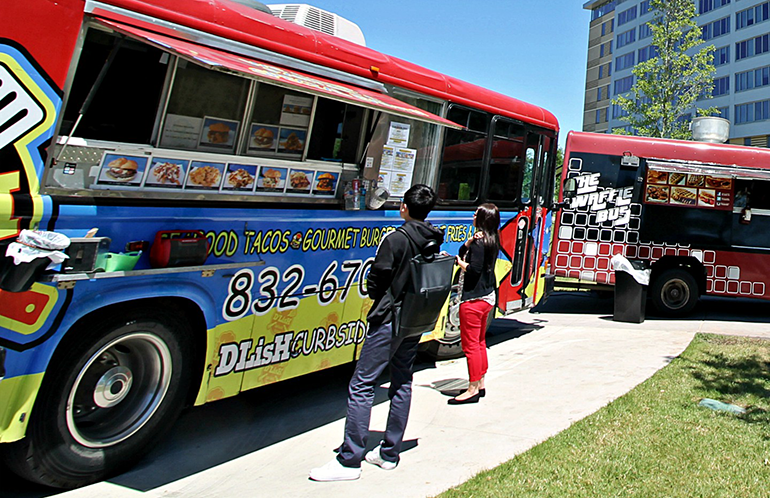 “That was a suggestion from our foodservice advisory committee and the students on that committee,” says Rosie Ashley, program director for Auxiliary Services. “We didn’t think that was going to be popular but we said, ‘Let’s give it a try’ and that first night the line was down the sidewalk!”

The truck program is popular not only with the student body but with the food truck community in the area, and there is a waiting list to join up, not an easy thing as there is little turnover. According to Ashley, only a couple trucks have left the program in the last several years and there are no plans to expand the number of available slots in the rotation.

“We don’t want to add too many because then they don’t get enough time on campus,” she explains. “This is our sweet spot right now and we don’t have the space to accommodate more.”

Trucks wanting to join the program must pass muster with both Chartwells Higher Education and the university in a variety of areas ranging from finances to proper sanitation and food safety procedures.

When a truck becomes part of the rotation, it is expected to show up when and where it is assigned. Ashley says there is a “three-strike rule” governing tardiness and no-show incidents that recognizes that occasionally things like mechanical or traffic issues out of the operator’s control can happen, but often in those cases, “the food truck community comes together and covers for each other” so that students are still served.

As for duplication of menus or concepts, “while we don’t want to have too much of the same thing, that hasn’t really been much of an issue even though a lot of [the trucks] are Asian fusion concepts,” Ashley notes. “However, even with that, they’re all a little different and they’ve all been very popular. We really haven’t heard any outcries about duplication.”

What the trucks do offer is not just more options in general but also satisfaction of some specialized preferences, she adds.

“We have a large Muslim population on campus, so halal and vegetarian options are a big deal to students,” she says. “We can’t always offer everything that they want in our dining commons, so as some of the trucks offer halal and vegan options, they’ve been able to help us with that. It lets us offer something extra to students who may not have been able to find something to their liking in the dining commons that day.”

Occasionally, the trucks even invade the indoor dining venues.

“In the fall of 2017 we introduced Food Truck Takeover, where once a semester one truck comes into the dining commons and serves its food all day,” Ashley explains. “It’s very popular with the students and the food trucks like it because it gives them more exposure.” 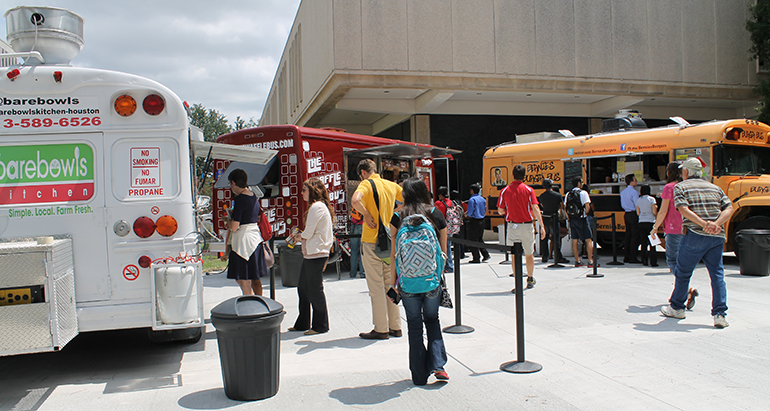 This was the scene in 2012 when UH originally invited area food truck operators to the campus to provide “temporary” meal service at the site of a food court shut down for renovation.

Yet another advantage of the program is it provides an extra layer of cover in emergencies.

“They have supported our other dining operations during unexpected facility issues and major events like Hurricane Harvey,” Ashley says, recalling that before Harvey hit there was an issue with the water in the dining commons that prevented its being used, forcing the facility to shutter. The trucks came to the rescue, dispensing meals, and the university and Chartwells extended the meal plan to allow meal swipes to be used to cover the meals served from the trucks. Usually, student can only use their Cougar Cash declining balance accounts at the trucks.

Planned for debut this fall is a food truck park on a campus location that previously held a stand-alone restaurant in dire need of renovation.

“We chose to just tear it down because it was not worth repairing,” Ashley explains, “and decided to put a permanent food truck park there with seating and covering so that students can come and hang out.”