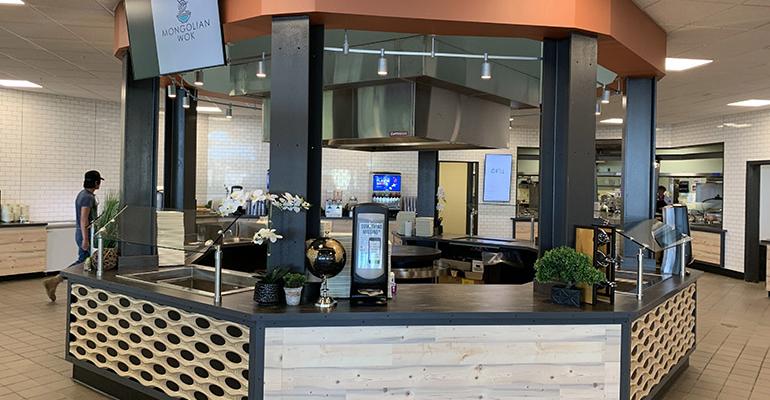 At the University of Southern Maine, each station was built with safety and customizable options in mind. The Mongolian Wok station features conventional and plant-based proteins served with broth, greens or noodles.
News & Trends>Colleges & Universities

At the University of Southern Maine, special diets shaped a dining hall renovation

When students walk into the newly renovated Brooks Dining Hall on the residential campus of the University of Southern Maine, they see a variety of stations, many with customizable options. 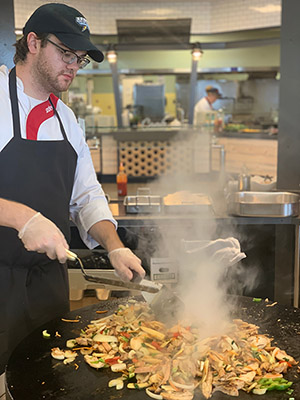 You’d expect to see the salad bar, deli station and pasta bar. But there’s also a Mongolian Wok Bar with a variety of meats and plant-based proteins that students can order with broth, over greens or mixed with noodles. At the open grill, the culinary team constructs made-to-order gyros, local burgers and plant-based burgers and serves up a slew of vegan sides. The gas-fired hearth oven is the place for custom pizza and calzones.

But this flexible system didn’t come from a menu brainstorming session – at least not at first. It grew from their plans to renovate the dining hall.

Tadd Stone, Sodexo’s general manager at the university, says the food management company expected, from the start of their partnership with the university in 2016, that they would invest in capital upgrades.

The dining hall was older, he says, with equipment that was more appropriate for catering than for a permanent dining destination on a campus housing more than 1,300 students. It had mobile tables and ice wells that sat on top of tables, rather than inset units. And they used a lot of heat lamps.

“The dining hall itself never felt permanent,” says Stone. “The perception of the students is that it was never fully finished.”

Work needed to be done. But before drafting a wish list of upgraded equipment and improvements, they surveyed staff and students. 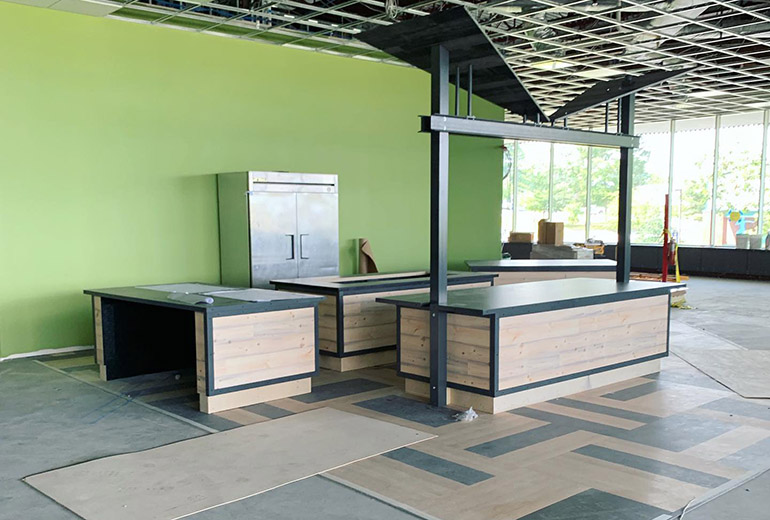 Staff identified food safety as a top priority. Students wanted flexibility in their meal choices and assurance that they would be able to consume meals without fear of experiencing an allergic reaction.

There was also a big push for more vegan options. Students who prefer a plant-based diet were ditching the meal plan, eating elsewhere or foregoing meals.

The culinary team wanted to meet as many of these requests as possible by building out a dining hall that focuses on consumer autonomy and safety. A $2.5 million renovation allowed them to do so. The down-to-the-studs renovation took place in the summer over a span of just 14 weeks. 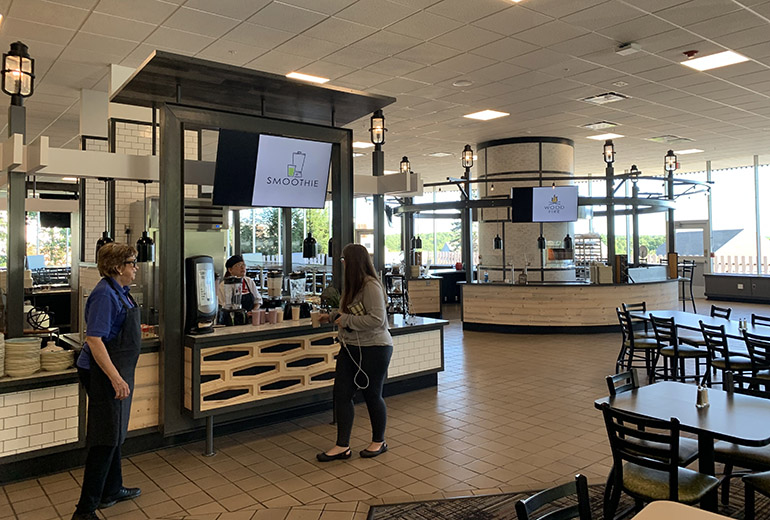 The $2.5 million renovation plans were based on staff requests for safety and student requests for personalized meal options and freedom from allergens.

They built out stations that focused on both the safety needs of the staff and the desires of students. An allergen-free hot entrée station has its own equipment and tools to avoid cross-contamination. Made-to-order and build-your-own stations are constructed so it’s simple to separate vegan ingredients from dairy and meat.

“With all of the stations, the team was focusing on deconstructing meals so they can be customized to help with restrictions and preferences,” says Chelsea Champagne, district campus dietitian with Sodexo.

The hot entrée station is part of Sodexo’s Simple Servings program, which provides students with allergen- and gluten-safe options at more than 100 universities around the country. These options are free of seven of the most common allergens: soy, peanuts, shellfish, milk, eggs, wheat and tree nuts.

A central focus of this program is to serve creative meals that anyone can eat so students with allergies don’t feel singled out. Recently they served Cajun roasted red potatoes, ancho-lime chicken breast, chakalaka and pickled vegetables.

My Zone, another Sodexo initiative, is a separate room that is gluten-, peanut- and tree nut-free. Access is granted only to students with a medical necessity. It existed before the renovation, but now it’s a card-access site, making it an even safer place for these students.

The culinary team also discovered that students were leaving college with few cooking skills. The answer? The U-Create station: A bank of nine induction cookers and pans with a central cache of ingredients that students can use to cook their own meals. There’s a hand-washing station and a chef supervises, monitors and offers advice.

The dining hall is not only more functional, it’s a nicer place to be. “It’s intended for eating and gathering,” says David Roussel, assistant vice president for student affairs.

Before the renovation, about a third of the windows that wrap around the semi-circular room weren’t visible in the dining area. When the space was reconfigured, all of the windows were incorporated into the design. It seats more diners—500 instead of 330—but feels less crowded. And diners have a variety of seating options—booths, tables or high tops.

Roussel says it’s obvious that students love the space. A lot of jaws dropped in the first few weeks of the school year. And they’re selling hundreds more meals every day.