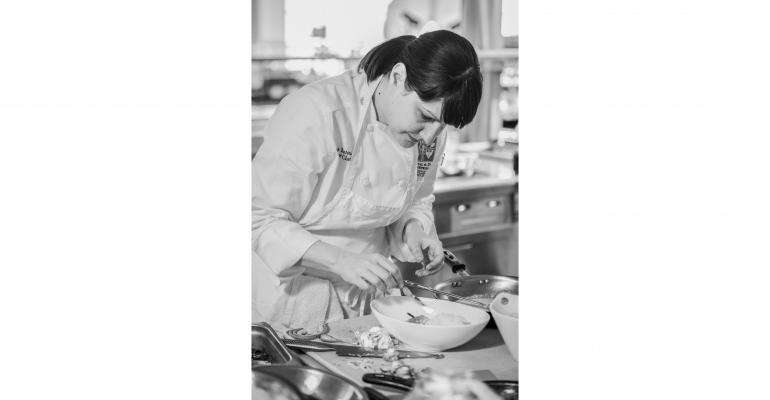 Viewpoint: How Stanford Dining cultivates a culture of camaraderie in an industry scarred by mental health issues

Sophie Egan, Senior Advisor for Sustainable Food Systems, R&DE Stanford Dining, tells the story of how Chef Christina Betondo, a working mom and one of the first women chefs at Stanford, has built a workplace that really welcomes.

“I want people to want to come to work.” This elegantly simple leadership strategy belies the complexity and rarity of an organizational culture where this is actually the case. Especially one within a vast foodservice operation, in an industry notorious for unhealthy kitchen cultures. But Chef Christina Betondo, Associate Director of Culinary Excellence at R&DE Stanford Dining, has managed to do just that.

Family is everything to Betondo. Unsure whether she’d ever have the chance to become a mother, she and her husband Sean (a bartender) were blessed with a son four years ago. George instantly stole her heart. Admittedly the center of her universe, George has given her an even deeper appreciation for centering the humanity in each person on her team.

That said, Betondo’s leadership style has always been people-focused. When she greets a colleague, she knows their kids’ names, their medical conditions, their birthdays, what’s new in their home life, their favorite sports team, their pets, etc., and she checks in on these things with such authenticity, it’s visible that colleagues instantly feel valued. In other words, she models this cultural ethos in her role every day at Stanford, where she oversees 18 units, serving 20,000 meals per day and managing 350 staff.

“A pivotal experience for me professionally was participation in the Women’s Leadership Summit in 2019,” Betondo says. “The opening keynote speech by Dr. Shirley Everett, Senior Associate Vice Provost of R&DE and Senior Advisor to the Provost for Diversity, Equity, and Inclusion, was engaging and insightful. I felt empowered and re-energized. As one of the first women chefs at Stanford, I so admire how Dr. Everett has forged the path here for women leaders, and created a culture where I feel accepted, supported, and encouraged to contribute my expertise to help support her vision of excellence.”

It’s okay to have feelings at work

Betondo embodies how being your full self at work can be not a distraction from meeting those high standards, but an enhancement. What’s perhaps most remarkable is how she’s done so throughout a career of running kitchens of mostly men--sadly, it’s anomalous to find a female chef in such a prominent leadership role such as hers. “I know women chefs always talk about what a hard time they’ve had, but I never felt that way,” Betondo says. “I have just always treated my staff as people—with lives outside of work. I really do care about all the people who work for me. ‘Are you okay? Is something up?’ You can just tell. That one minute of a day changes how people respond to you. I have never had to rule with an iron fist. Instead, my style is, ‘This is the standard. We’re all on the same page, working together.’”

Rather than detract from her ability as a leader, marrying the personal with the professional actually makes her a more effective leader: making each person feel seen and appreciated brings out the best in them; together, as a result of this culture of wellbeing and support, the ability to work together almost as a single organism—through their “one team” mindset shared across the organization--colleagues exemplify culinary excellence, above all.

Betondo and her Stanford colleagues are also widely recognized standard-bearers in the industry for healthy and sustainable menus, diverse cuisines and team members, and beyond. All together, the holistic food experience they are providing to students on The Farm rivals many of the top restaurants in the Bay Area. Christina would know, as she worked at one of San Francisco’s most famous, Slanted Door. But it was a long and adventurous road to SF.

Growing up in Houston, her father ran a valve repair company in the garage of Betondo’s grandmother’s house, and her mother ran the books and scheduling. Her love of cooking came from her mother, who would make Betondo and her sister sit at the table all day rolling spanakopita and dolmas, or skewering shish kabobs for big family barbecues. The Mediterranean Diet was definitely the norm in her house. Her mother passed away when Christina was just 26 years old. Bone cancer, it turned out, and it all happened in a flash. “I miss her all the time,” she says. “Having George was the hardest. I wanted him to meet her.”

She has fond memories of hanging around the kitchen, learning from her mother. Things really took off for her culinarily when she was in college and her best friend welcomed her into his parents’ garden. She explains: “He was my farm-to-table guide.” They’d cook together and enjoy treats from the garden like fresh mint iced tea. “Other people our age liked fast food. They weren’t so into eating healthy.”

Christina went to school for hospitality administration, thinking she’d become a hotel manager, not a chef, but then she had the chance to work the 1996 Olympic Games in Atlanta. That’s when she officially fell in love with the kitchen. That led her to attend the California Culinary Academy (CCA) in San Francisco, where she first met Chef Tami Lin, an Executive Chef at Stanford Dining, where the two remain an inseparable, unstoppable duo. She tried catering briefly, then the San Francisco restaurant scene, then a reality TV show of all things. Tami was there, naturally, along with their close friend Mayra, and they spent months cooking for the cast and crew while living in the Fairmont Hotel in Acapulco, Mexico.

Flash forward over the next few years of her career, and stops along the way included being an Associate Instructor at CCA, then getting laid off, then working on a 65-passenger National Geographic boat in Alaska. “Everyone else was 20, escaping broken relationships, and I was 34 by that point,” Christina said. “I felt like the mom of the boat.” She also worked as a sous chef and then executive chef at Sports Club LA in San Francisco. This turned out to be formative in shaping her own leadership and management style: “No one micromanaged you. It was not a high-stress environment. A lot of my really best friends are still from there,” she says. She went on: “It felt like family. That environment was very bonding. I’ve always enjoyed being part of a pack. I like knowing people and hearing their stories--knowing things that make them happy. I naturally enjoy that.”

Next up on her professional journey was the Slanted Door Group. In Christina’s words: “I’d never been a commissary chef, but my friend said, ‘Go see what you think.’ So I met Charles [Phan], and he didn’t like me. He told me that after—‘You’re too quiet.’ They hired me…Then Charles and I ended up being great friends. I traveled with him everywhere.”

This experience too turned out to be formative for her current role, where she began by overseeing Stanford Dining’s Central Production Kitchen (CPK), before she was promoted to Assistant and now Associate Director of Culinary Excellence. “At Slanted Door, I learned not only how to run a commissary, but how to maintain and exceed extremely high standards.”

Chef Jason Sanchez, whom she also recruited to the Stanford team and who now serves as Associate Director/Executive Chef of CPK, also clicked with the commissary at Slanted Door, and they ran it together. Being a commissary chef “takes a certain mind.” They would craft production models based on weather patterns, for instance. They built relationships with multiple units, all served by the commissary, much like they do with each dining hall at Stanford. As she explained, she built a culture of camaraderie and support, and carried that philosophy to Stanford Dining.

In addition to her leadership and team-building philosophy, as a chef, her culinary philosophy centers on fresh, seasonal, simple food, harkening back to those formative teenage years in her friend’s garden. She loves food that makes you feel good afterward. One example of that is the fact that one of her proudest accomplishments during her tenure at Stanford has been the breakfast salad bar she helped introduce. It was a huge hit. And no one, even her, could believe how much salad students began eating in the morning.

“Christina is incredibly thoughtful, creative, and passionate about great food, so she really understands how to collaborate with other chefs,” says Eric Montell, Executive Director of R&DE Stanford Dining and a graduate of The Culinary Institute of America. “She knows how to communicate her vision with those who are working for her and has exceptional attention to detail, while being calm under pressure. These are exactly the traits I look for in leaders. I recognized early on that she has incredible knowledge, depth, and complexity from such varied work and life experiences. Her exceptional leadership continues to unfold at Stanford and it is truly amazing to watch as this occurs.”

The feeling is mutual. “Under Eric’s leadership the past seven years, it has made a huge impact for me to work for a leader who has a background as a chef,” Christina explains. “From day one, he has seen tremendous potential in me. He has the ability to see and appreciate your strengths, while also inspiring you to grow and develop your skills as a leader. Eric’s dedication to growing and developing women chefs is unique in this industry and is part of what makes working at Stanford Dining so special. I consider myself fortunate to be in a position of leadership to support this vision of a more equitable workplace for women in the food industry.”

On top of it all, her passion for food is boundless. She’s someone who simply relishes the joy of eating--all foods really. With a special place in her stomach and her heart for the foods of her childhood: “The thing I love to eat and get most excited about is Mediterranean food. It’s my love, because I grew up eating that. I love how fresh and clean it is.” No doubt, then, why a new project in Arrillaga Family Dining Commons, her home base for the entire dining enterprise, is particularly exciting to her: designing a cutting-edge Mediterranean concept.

She brought her infectious passion and abundant talent to Stanford seven years ago, and since then, she and Jason have tripled production. They reorganized all of the processes throughout the commissary. These process improvements in the CPK have “made [our colleagues’] lives significantly easier even though we’re doing more work,” she said. In short, it comes down to building strong relationships and earning trust across an organization, she said.

Throughout her day on the sunny Stanford campus, when her mind isn’t doing its wizardly operational organization to think through a new CPK project or help problem-solve at one of the dining halls, invariably it wanders to George. Before long, she’ll be home in foggy San Francisco, cooking up a simple meal, George’s feet dangling as he sits on the counter, soaking up her vast knowledge and tasting new flavors, just as Christina did with her mother. And tomorrow, when she makes the rounds and greets her team throughout the day, no question they’ll be swapping photos, laughing, and telling each other all about their delicious dinners at home, with family