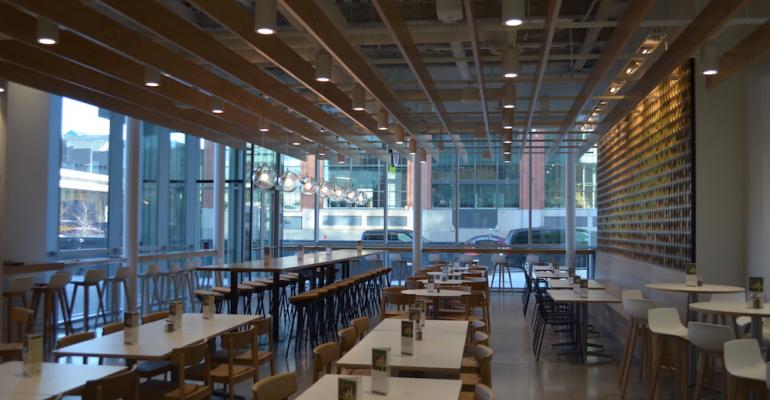 The 5th Street Station serves employees and visitors to the National Bone Marrow Donor Program as well as walk-ins from surrounding businesses.

When the Be The Match registry of the National Bone Marrow Donor Program opened its new headquarters facility last November, it also opened an increasingly trendy local eatery. That’s because the group’s building in downtown Minneapolis includes a ground-floor restaurant called the 5th Street Station that is operated by Bon Appetit Management Co. and hews to the company’s philosophy of food made fresh with quality ingredients.

The restaurant’s primary mission is to provide the some 450 staffers who work for Be The Match in the building with a convenient onsite foodservice option, but 5th Street Station is also open to the public and has been drawing increasing numbers of walk-ins from businesses and condominiums located nearby. The historic 10-story Ford Center is next door, for example.

“Some of our best customers are walking two blocks from the Metro Transit headquarters down the street,” says Bon Appetit’s Chris Gumm, who oversees 5th Street Station as chef-manager. He estimates the customer mix at lunch approaches a 50-50 split between Be The Match employees and walk-ins.

Even more traffic is expected when the Major League Baseball season gets underway in early April. That’s because Target Field, home of the Minnesota Twins, is across the street.

“We’ll have events on opening day and are looking into adding a happy hour-type bar where people can come in on game days,” Gumm offers. A liquor license is being finalized. There will also be a new bar menu with shareable items, and the eatery’s hours may expand into the early evening to accommodate both baseball crowds and after-work socializers from the nearby offices.

The 5th Street Station is currently open during the week from 7 a.m. to 3 p.m. with a fruit/yogurt bar, baked goods and a full grill with a daily special in the morning for breakfast.

Lunch offerings include a salad bar, build-your-own deli, a sandwich bar, a grill with a regular menu and daily special and the Chef’s Fare entrée station that offers a different special each day.

Menus are determined by “what’s in season, what we can source and what balances what we serve at other stations,” Gumm says.

On the day FM spoke to Gumm, the breakfast special was buttermilk biscuits with sausage gravy and two eggs any style, while the lunch grill special was a barbecued pulled pork sandwich with coleslaw or sweet potato fries, with the pork sourced from local supplier Fisher Family Farms. The entrée of the day was turkey with dumplings, with the turkey sourced from local poultry producer Ferndale Market, and the deli featured a mac ‘n cheese bar with toppings like ham and vegetables.

Obviously, sourcing local produce becomes difficult in the winter months in Minnesota, but Gumm is still able to satisfy the Bon Appetit corporate requirement that at least 20 percent of the ingredients used in the operation are from local sources (defined as coming from a radius of 150 miles).

“It’s a little harder this time of the year,” he admits, “but we use a local co-op dairy and local meat producers.” He also sources more root vegetables and other stored crops from area farmers with whom he has developed relationships.