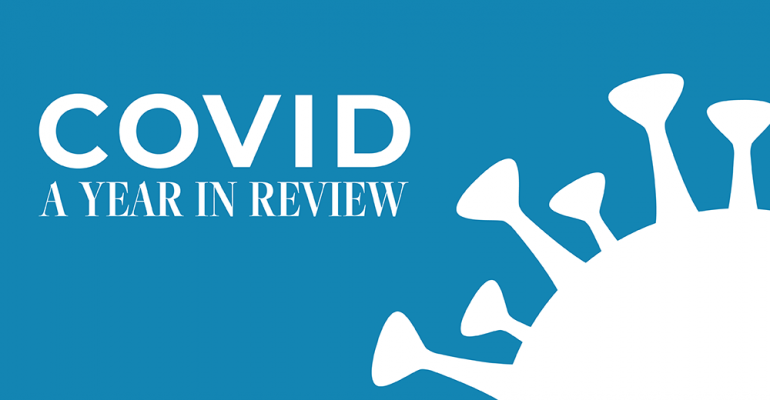 Start Slideshow ›
Since the outbreak of the COVID pandemic early last year, the world—including the world of onsite dining—has changed enormously. Here are some of the key dates and developments from a year of living dangerously...

Last January, a phenomenon that had been reported sporadically from China in the latter half of 2019—the outbreak of a new and deadly virus—suddenly began to make an impact on the United States, starting on the West Coast but spreading rapidly. In early March, businesses and institutions that host onsite dining programs began to be directly affected, with schools and colleges cancelling classes and sending students and staff home, and businesses asking employees to work from offsite if they are able.

By the end of March, just about every educational institution across the country was closed to in-person instruction, while most business that could have employees work from home went that route. Hospitals banned visitors and restricted non-critical services while senior living communities isolated residents in their rooms or homes. The NBA and NHL suspended their seasons in progress and Major League Baseball postponed opening day indefinitely.

Summer brought a bit of optimism as some school districts and universities made plans for partial reopenings in the fall, plans a rise in infections curtailed in some states. The development of possible vaccines late in the year and their initial rollout renewed hope but as the crisis hits its one-year anniversary, it’s clear that COVID is something that will linger in the culture for a long time in the way it has impacted how we live and work.

The following timeline is hardly comprehensive, but we’ve tried to cite key developments, both in the onsite dining community and from influential external parties like the WHO, CDC and U.S. government, to give a sense of how the crisis developed and how Food Management followed and covered the major issues relating to the pandemic.