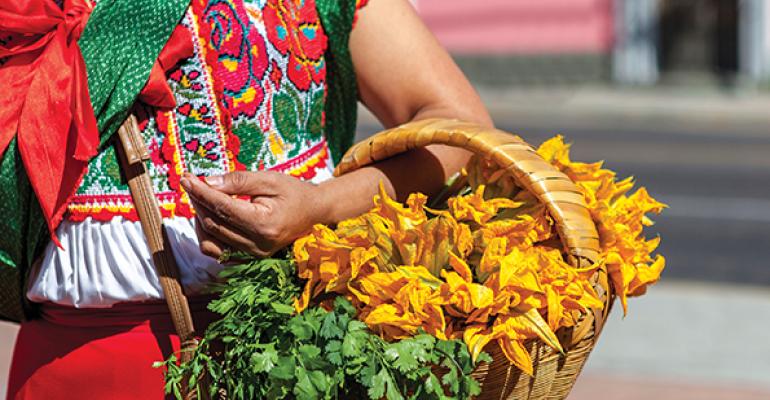 Menu items at the Arizona Student Union and the Arizona Catering Co. take some twists and turns down the dusty roads of the Yucatan, the buzzing metropolis of Mexico City and the busy seaside towns of Oaxaca.

"Americans have fallen in love with the great Mexican combination of rich, earthy flavors and casual, festive dining,” says Michael Omo, senior executive chef, Arizona Student Unions at the University of Arizona. “But still, most Americans don’t begin to imagine how sumptuous and varied the cooking of Mexico really is.”

So Omo strives to give student diners an informal tour of the regions with a Mexican menu selection that goes far beyond a Taco Tuesday or burrito bar. Both familiar Mexican food and more off-the-beaten-path Mexican menu items appear at dining concepts and the in-house catering operation, the Arizona Catering Co.

“Every cuisine has classic combinations of flavors that emanate from the different dishes,” Omo says. “So I encourage people to dive in and try the real thing!”

The regions of Mexico at a glance

This region illustrates the duality of the Spaniard and the Aztec and features poblano peppers, dried chilies and mushrooms. The cazuela, a traditional cooking vessel often made of glazed clay, is prevalent in this regional cuisine.

Including Oaxaca, this is a region where Indian heritage shines through in the cooking. “It’s complex and distinctive,” Omo says. This region features dried peppers, stews and savory well-spiced fare that’s heavy with clove and cinnamon.

“This is the essence of national flavors,” Omo says. Here is where so many beloved Mexican dishes originate: crispy fried pork carnitas, pozole, tequila-as-an-ingredient, fried tacos and red chile enchiladas.

“This is the land of simple, well-seasoned cooking,” Omo says. Drawing from the bounty of the sea, popular dishes include fish with tomatoes, herbs and olives, spicy crab soup, turnovers and plantains.

The Mayan tradition holds strong here, especially the love of anchiote seasoning (also known as annatto, it’s made from the seeds of an evergreen tree). Pork cooked in banana leaves, wild turkey, pumpkin seed sauces, and chicken with vinegar and spices dominate the cuisine.