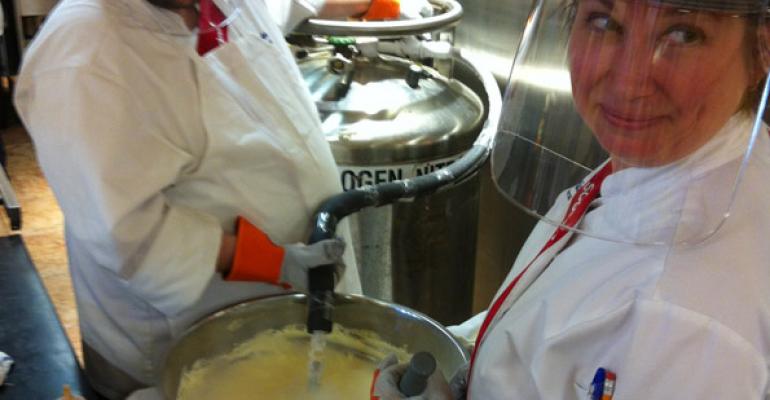 Molecular Gastronomy for Lunch on Campus

The show starts with spheres of balsamic dressing on a bed of romaine and ends with a huge tank of liquid nitrogen turning cannoli ice cream into a space-age spectacle.

These items and more are on the menu this week at Fairfield University and the University of Bridgeport (CT). A special event called “Compounds & Cuisine” will showcase campus and district chefs conjuring up some culinary magic with molecular gastronomy.

“It’s so unusual, people are taken aback,” he says. “Some students are foodies and they’ve seen about this on TV or heard about it, but haven’t seen it in person.”

What happens when someone bites into a salad dressing sphere for the first time?

“I think there’s some apprehension, so that’s why we produce everything in front of them. They see how we’re turning a liquid into a powder or a liquid into a pearl,” Pawlowski says. The pearls are made by spherification process, in which a calcic bath and citrate form a skin around the vinegar. The result is something that resembles caviar.

“So when someone tries it and it bursts into their mouth, it’s unexpected for them: the flavors are very intense and the experience is so unusual.”

The menu, which has been developed by a few campus chefs working with Sodexo, includes some pretty sci-fi selections:

Creating pearls out of salad dressing and using liquid nitrogen may not be in the typical skill set for many chefs, so the event has morphed into a culinary road show, with district chefs from Sodexo visiting a group of schools and teaching the art of extreme science in the kitchen.

“A lot of people are intimidated by this, but it’s fun. You don’t have to be a chemistry major to do it,” says James Turner, catering chef at Fairfield University. He first witnessed molecular gastronomy at a catering trade show, and has quickly learned how to create chemical and physical transformations in food using food-safe compounds that are derived from seaweed, protein and plant byproducts.

Turner ended up taking classes in molecular gastronomy and features some impressive items on the school’s catering menu, like a classic Caprese salad (tomato, basil and mozzarella) that takes the form of gel sheets. The effect is intense flavors that are familiar but at the same time something entirely different.

Another great catering item is a savory bleu cheese panna cotta also made with gel sheets of blue cheese and leeks. Basil powder has been a standout ingredient that people really love on the catering menu, Turner says, adding that powders are made by stirring food together with maltose dextrin.

For the “Compounds & Cuisine” events, which typically serve tasting portions to between 500 and 2,000 people, the hardest and most time-consuming part was testing recipes and making sure they could be translated to such a big volume. Molecular gastronomy is tricky, requiring the use of an accurate gram scale, the liquid nitrogen tank and other special equipment that looks more mad scientist than basic kitchen.

Once the recipes are tested and perfected, though, “it’s surprisingly easy to pull off,” Turner says.

John Hicks, Sodexo district manager, sees the event as a way to bring excitement to campus dining, and as “an opportunity to celebrate culinary innovation and talent,” he says. The event is also taking place soon at Assumption College, Bryant University, Nichols College and University of New Haven.