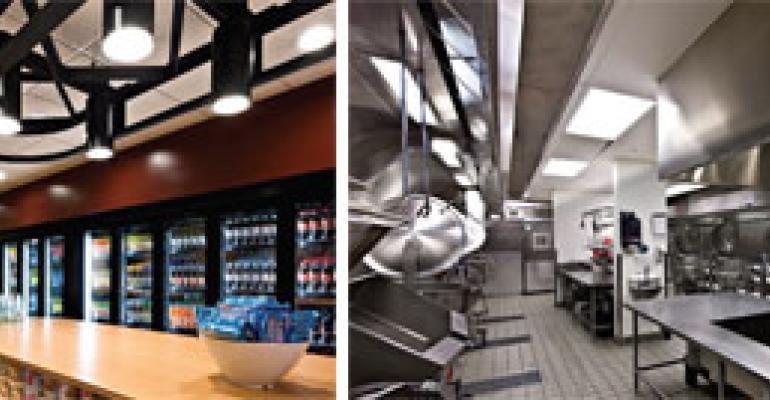 Equipment Innovation in the Age of LEED

Growing interest in LEED certification and energy savings that justify efficient equipment investments are changing the way foodservice kitchens and serveries are outfitted.

This past November, long-running efforts to encourage more sustainable and energy-efficient commercial foodservice operations took a major step forward. That's when new LEED for Retail standards were finalized, a milestone that capped a multi-year effort to realistically apply the nation's most widely recognized building sustainability certification program to commercial spaces like restaurants, which have “process” needs that vary significantly from those of ordinary building areas.

The advance is a significant one for foodservice operators, from large restaurant chains to institutions with major foodservice preparation and serving facilities. It will define what having a “sustainable” foodservice facility means for years to come and will give a big boost to the already rapidly growing interest in more efficient kitchen and foodservice display equipment.

The Different Flavors of LEED

The LEED certification program itself has been evolving since 1993. That's when two pioneering entrepreneurs, David Gottfried and Rick Fedrizzi, co-founded a private 501(c) 3 membership-based non-profit trade organization called the U.S. Green Building Council (USGBC). The Council focused on promoting sustainability in the design and construction of buildings and, in 1994, established the LEED rating and certification program that has since become a standard adopted and adapted across the industry.

Today, LEED is an internationally recognized green building certification system that uses third party verification to recognize building performance in areas like energy and water efficiency, CO2 emission reduction, improved indoor environmental quality and other areas. While LEED-certified construction is still the exception rather than the rule, the very existence of the program has tended to increase the awareness of many institutions and corporations in terms of the sustainability issues LEED certification raises.

Originally LEED was a “one size fits all buildings” standard, with all of the limitations that would suggest. In particular, it had major shortcomings in relation to areas like kitchens, which in LEED language are “process intensive,” using energy, water and environmental control systems differently than ordinary building space does.

However, the LEED program evolved over the years to recognize such differences. The new LEED for Retail standard is just one more adaptation: there are now major LEED certification categories for New Construction, Commercial Interiors, Schools, Healthcare and Retail facilities, with sub-categories that recognize renovation and retrofitting projects.

If your organization has chosen to pursue a LEED-certified project, and foodservice facilities are part of it, you are probably working closely with an experienced consultant who is often a LEED Accredited Professional (LEED AP). But whether your location is actually aiming for a Gold (or Silver or Platinum) LEED rating — or your organization is simply trying to be more sustainable by making a few energy-saving kitchen equipment purchases — the advent of LEED has raised the bar.

The largest impact LEED standards have had on foodservice operations is in the area of equipment. In particular, specifying highly energy and water efficient appliances, lighting and ventilation systems is a major factor in helping a project meet LEED certification criteria.

Very often, those equipment choices require that equipment specs include the now seemingly ubiquitous Energy Star label, which has caused some to confuse the connection between the two programs.

In fact, the Energy Star label was introduced in 1992 by the Environmental Protection Agency. Its standards have been updated over the years to recognize advances in technology and performance, but its basic idea has remained the same: the Energy Star label certifies that a given piece of equipment meets or exceeds a specific level of efficiency the program has established as being significantly above that of an average unit in the same category.

As of this writing, seven categories of commercial kitchen equipment can feature Energy Star unit ratings. These include steamers, fryers, convection ovens, griddles, reach-in refrigerators/freezer machines, hot holding cabinets and dish machines. (To learn more about these categories and how they apply to commercial foodservice operations, go to www.energystar.gov/index.cfm?c=products.pr_find_es_products).

While Energy Star remains a completely separate program from LEED, the LEED program recognizes that Energy Star has become the de facto standard for equipment energy and water efficiency. For the most part, LEED has wisely not tried to “reinvent the wheel” in this area.

So just how is foodservice equipment evaluated to ensure that it can be certified as Energy Star compliant? For answers to this and related questions, we turned to industry guru Don Fisher, president/CEO of San Ramon, CA-based Fisher-Nickel Inc. Fisher-Nickel has been a pioneer in this area for a quarter century and its equipment testing and research activities have become the bedrock upon which many utility companies, state energy authorities and manufacturers have come to base their own standards and criteria.

The company's website (www.fishnick.com) is also a veritable treasure trove of information for operators, including (just for starters) a nine-page “Energy Star Guide for Restaurants/Putting Energy into Profit.”

The guide was created in partnership with Pacific Gas & Electric Food Service Technology Center, itself long credited with being a center of expertise for commercial kitchen energy efficiency and ventilation, appliance performance testing and sustainable building design.

That brings us back once again to the Energy Star program and the part the Fisher-Nickel organization has played in its development.

One of Fisher-Nickels' long time roles has been to represent PG&E and the Food Service Technology Center (FSTC) program (funded by California utility customers and administered by PG&E under the auspices of the California Public Utility Commission).

Fisher, through FSTC, has over many years assisted the EPA “in identifying contacts within the foodservice industry to help make the commercial food service equipment segment of the program possible,” he explains.

FSTC is also a member of the specification development group for Energy Star. Acting as a third party, “we, as the FSTC, apply standardized industry tests to equipment to determine if manufacturers can qualify an appliance model for Energy Star,” says Fisher. Such uniform procedures ensure that “apples to apples” comparisons can be made among units made by different manufacturers.

The specific tests used are developed by the American Society of Testing and Materials (ASTM), but helping to develop and improve such tests has been a major objective of the FSTC since its inception. Fisher also notes that while FSTC acts as an unbiased party doing the testing, manufacturers looking to become certified still must submit those test results and their applications directly to the Energy Star program.

It's no secret that utility rebates are often available to operators who purchase energy-efficient equipment, but Energy Star certification may or may not be enough to qualify you for these. Organizations like FSTC can help you determine if the model you are looking at meet rebate criteria, which sometimes exceed those of the basic Energy Star label.

If you're based in California, and FSTC is a certified third-party lab for California Energy Commission (CEC) compliance testing, you can visit fishnick.com/rebates. On the other side of the country, Ed Smyth serves as director and consultant of KEMA Services, which provides similar information for New York, another state that has been a leader in promoting energy efficiency.

KEMA designs and provides program services for utilities and state entities like NYSERDA (New York State Energy Research Development Authority). Among other services, it provides information and support to New York State end use customers who are eligible for NYSERDA programs through the authority's Focus on Hospitality (visit: www.energystar.gov/index.cfm?c=pt_univ.eeps_sites_nyserda).

Smyth notes that in addition to the Energy Star rating program there is yet another set of industry standards recognized by a group known as the Consortium for Energy Effiency (CEE, found at www.CEE1.org). CEE is a voluntary organization of energy efficiency program providers from various states whose members include utilities, state energy offices, and “partners” such as manufacturers and government agencies. The U.S. Department of Energy and EPA both provide funding.

Smyth explains that NYSERDA provides incentives (for NY state-based operators)for commercial equipment standards set by CEE. “In some cases, Energy Star and CEE standards are identical; other times CEE standards are higher.” That's because utilities make rebates available based on their own load management needs.

In other parts of the country, operators should check with local utilities about the availability of similar rebate programs.

It is easy to see why confusion so often exists about the relationship and differences between these various kinds of programs, which all share some common goals.

“LEED standards are meant to advance the entire Green Building industry, to give people — including manufacturers and operators — guidelines for moving forward,” says Fisher-Nickels' Richard Young, its senior engineer/director of education. That is, there are no LEED-certified appliances, and in most cases you don't get credit towards a LEED certification by directly specifying any particular piece of equipment. In new constrtuction, LEED certification relies upon the use of a computerized model to simulate a building's energy performance as well as upon other factors. More efficient equipment simply contributes to the building's performance.

Young sees LEED certification as a “reach” standard for many, but still a very viable tool to encourage efficiency.

“It's a way a forward-thinking company or institution can move ahead. It also provides a way to help justify the cost of equipment to management [by pointing to dollar savings as well as the public recognition garnered by attaining LEED certification].”

And it is in that sense that the advent of LEED certification has significantly changed the paradigm for equipment manufacturers and their national association, NAFEM, Fisher believes.

“You'll see references to Energy Star and the LEED program as attributes manufacturers want to be associated with” whether an entire product line meets Energy Star criteria or not, he says. “The existence of these programs has unarguably driven innovation and changed the market. “Energy Efficiency” wasn't on the banners at NAFEM even four years ago.”

Plugging Holes in the Certification Process

In mid-March 2010, the U.S. Government Accountability Office (GAO) provided EPA with a copy of an audit report on the Energy Star product certification process, researched with covert testing, that found “the process is vulnerable to fraud and abuse.

“In particular, the GAO demonstrated that the Energy Star product qualification process was not sufficient to prevent manufacturers choosing to falsify information from doing so.”

While the report did not cite any examples of actual fraud, it did point to some of the weaknesses that plague a self-certification system like the one Energy Star had relied upon. More importantly, it also underscored the importance of third party testing for standards of this sort.

Those points were not lost on EPA, which quickly moved to address the points GAO identified. “Self reported” certification results are no longer permitted and testing by third party labs is now required for Energy Star certification.

However, should you encounter a problem (or have your doubts), the EPA encourages you to send a note to [email protected].

Those with an interest in this issue can download a pdf of the original GAO report from the GAO website at: gao.gov/new.items/d10470.pdf