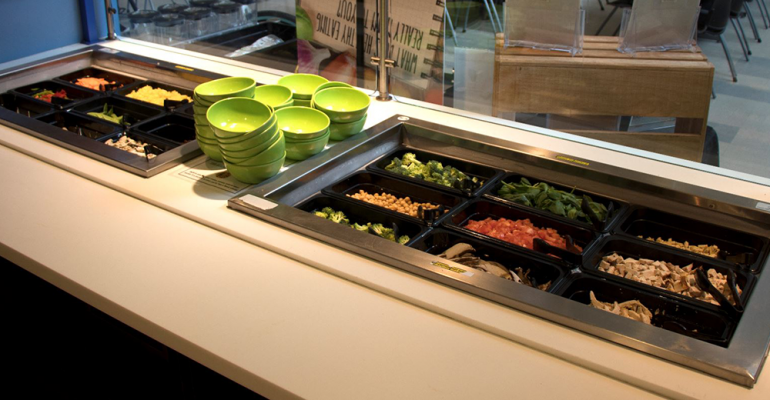 Students are their own chefs at DIY station

[email protected] at Framingham State lets diners prepare their own meals while overseen and guided by professional culinarians.

“Have it your way” takes on a whole new meaning at the [email protected] station in the Framingham State University (FSU) dining hall, where students can prepare their own lunch and dinner meals under the watchful eye and assisting hands of a staff chef.

Implemented at the start of the spring 2018 semester by FSU Dining Services and management company Sodexo, the station provides young would-be culinarians with a variety of fresh vegetables, cooked proteins, al dente pasta, sauces, spices and seasonings. They can then use an induction burner and saute pan to cook a combination of items, or they can reheat pasta and steam vegetables while the chef supervising the station ensures that they are doing things safely and offer advice on things like cooking techniques and flavor combinations. Students get to prepare meals their way at FSU’s [email protected] station.

[email protected] was introduced into the dining program as a result of feedback from students, who indicated that they wanted a more personalized meal and dining experience in the dining hall, and it has been a success since it debuted in January. Even after being open for almost a whole semester, [email protected] still had patrons lining up to use it, especially at dinnertime.

The target population for the station initially was resident students, but other campus community members have also shown interest, says a dining spokeswoman, who noted that “before opening, we teased the concept on social media. Word of mouth and an email blast a few days after the station opened was all it took to get the station busy every day.”

A “Chopped”-style cooking competition was held at the station a month and a half after its debut, and “we hope to run cooking classes and demos out of [email protected] in the future,” the spokeswoman says.

[email protected]’s costs were minimized by repurposing a platform originally developed to execute the Framingham State Food Study, a free-living dietary intervention study that concluded last May after three years and more than a hundred participants.

“We wanted to be flexible and offer a wide variety of ingredients, and also take the opportunity to repurpose ingredients which otherwise may have been underutilized,” the spokeswoman explains.

Instructional materials tabulate seasoning definitions and suggested uses, offer basic recipes and provide tips on fundamental cooking techniques, such as how to stagger different kinds of ingredients in a stir-fry. There is also a series of photos showing appropriate portion sizes for different ingredients.