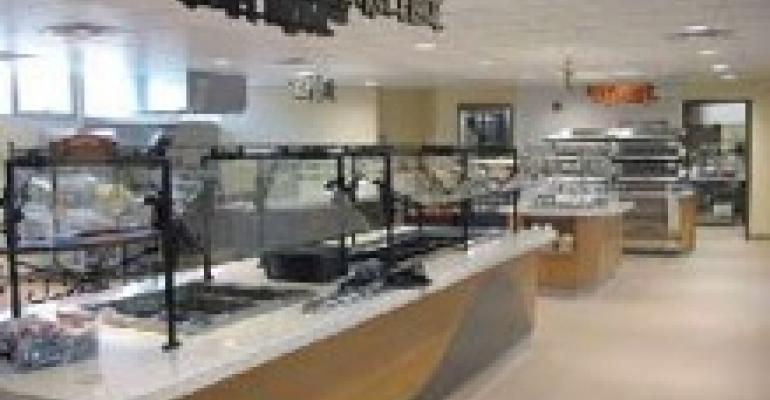 When Equipment Makes the Makeover

When Food Service Director Maureen Faron, R.D., L.D., began working with Cini-Little consultant Ron Kooser to plan a complete, down-tothe-studs renovation of her Chagrin Falls, OH, high school kitchen and cafeteria, she knew she was going to end up with a safer, more efficient operation. Two primary goals were to create an attractive, food court-style servery while also bringing outmoded utilities and ventilation systems up to code.

What Faron didn't expect was that some of her equipment choices would turn out to have longer-term impacts and benefits than they were originally purchased to provide.

One key piece was the impinger oven, the heart and soul of the cafeteria's new "Brick Oven" station, designed to produce fresh-made pizza as an upgrade from the previouslymenued, heat-and-serve product. While it does that—quickly, efficiently and in a way that's visually appealing to customers—it also turns out to be ideal for churning out hot sub sandwiches and making possible a fresh, hot bagel program in the mornings, Faron says.

"The aroma really pulls them in, and breakfast sales have taken off," she notes. "We've been able to go beyond what we thought we'd do with the menu, thanks to the equipment."

Along with a new warming unit that displays the pizzas with attractive lighting and sneeze guards next to the oven, Faron says "the equipment has allowed us to do a great deal of marketing by more effectively featuring the food. It looks like high quality, demo cooking now."

Other stations incorporate warming cabinets, built-in refrigeration under counters, a grill and batch cooking areas. The latter replaced some of the larger back-of-the-house prep areas in the old design, making way for new walk-in freezer and refrigerator space in the remodel.

A redesign of the school's dry storage room shows similar innovation. Stationary shelving was replaced by rolling racks that move like book cases. In use, an access aisle is "opened" each time staff needs to pull ingredients from a particular area.

"In a third of the space we used before, we've actually achieved greater storage capacity, and it's much more efficient visually, too," Faron says.

MOTOROLA DELI STATION
Outfitted for Speed
At Motorola in Schaumberg, IL, Manager of Hospitality Services Carol Bracken-Tilley needed a way to speed up the long lines trailing out of the deli station at lunch time. She thought that reconfiguring a small storage room at the front of the servery into a rapid cook station for hot sandwiches might accomplish that.

The purchase of a high-speed, ventless oven helped her achieve that goal and also facilitated some others, among them:
• a way to offer foodservice during extended hours after the cafe closes;
• a significant increase in sales and customer satisfaction levels;
• a one-FTE reduction in labor
"Hot sandwiches are big," she declares. "We had panini grills, but they can take three to four minutes per order, and that was too long with the lines we had."

With the new small-sized but speedy ovens, which include several types of heating capability, Bracken-Tilley notes two to three sandwiches can be rethermed simultaneously, within 45 seconds to one minute. And by adjusting the deli concept from a made-to-order motif to displaying a half dozen different varieties of pre-made sandwiches, it allows customers to "walk in and point; they're in, they're out," she says. "That way, there's no need for an extra person to produce custom orders."

The concept proved so popular it was subsequently used at three other locations on the campus, and Bracken-Tilley reports that unit sales increased on average about 15 percent each time the concept was introduced. Offerings range from chicken buffalo subs to veggie sandwiches with cheese, "and the customers really love not having to wait," she adds.

CONCORD HOSPITAL HEALTHY MENU
Spec-ing Health
Implementing a kitchen renovation to coordinate with his "totally health-based" menu philosophy, Tom Serafin, director of foodservice at Concord Hospital in New Hampshire, determined the first step of his redo would be to remove some equipment.

So out went the fryers. ("Even with healthier oils available, it's a big jump to say you can actually fry healthfully," he says.) And in a double switch move, he then swapped out a convection oven for a combi oven as the fryers' replacement. Of course, oven baking French fries instead of deep frying them isn't new in terms of healthy options; but as a twist, Serafin nixed the common use of sheet pans and instead places the fries in baskets—sans the oil—inside the combi oven.

"There's a huge difference in the results between using sheet pans and the baskets," he explains. "The basket fries are far more uniform and crispier – as crisp as they were when we deep fried them – and they have more of a true potato taste now."

It took some experimenting with heat and steam levels, but Serafin says a bag of fries now emerges crisp and delectable within seven to eight minutes cooked at 400°F-plus in the combi oven. He uses the same technique with equally favorable results for chicken fingers and home fries. Customers haven't objected to any of the changes, or even noticed a difference, which was important to him. "I have no desire to sacrifice quality to reduce fat or increase speed," he emphasizes.

Serafin's plan for the near future is to replace three additional existing convection ovens with combi ovens and to begin extensively training staff on their myriad other uses. "The combi ovens are also great for fish, as an example," he says. "It comes out faster, moister and hotter than in traditional convection cooking.

Other health-based equipment purchases Serafin has already made or plans for his renovation include:
• pasta cookers to prepare not only noodles, but to blanch fresh veggies, too;
• flash-bake ovens for quick retherm use and speedy pizzas;
• a charbroiler for preparing lean meats; and
• an investigation into halogen oven technology for additional healthy menu applications.

SAN DIEGO VA HEALTHCARE SYSTEM
The manufacturer as Problem-Solver
Equipment manufacturers and their reps can often be an operator's "friend in need" when it comes time to solve space or configuration challenges while equipping a kitchen. At the VA San Diego Healthcare System in California, Director of Nutrition & Food Service Ginger Hughes, M.S., R.D., had experienced frustration with an impractical dishroom set-up. "We had a conveyor belt for scraping dishes against one wall, and the actual dish machine was a long walk away from it," she explains. "Employees had to use a cart to transport the dishes between the two, and it was very inefficient."

When time came in late 2006 to replace the old dish machine, a model the department continued to like, Hughes realized she needed to rethink the whole set-up. Existing replacement models were short for the space, but Hughes was able to work with the manufacturer, Stero, Inc., to get an elongated, customized dish machine with attached conveyor belt that could snugly fit ltogether on the same side of the room, significantly speeding up the dish loading process. The joint effort also resulted in another considerable cost savings: the elimination of one entire dishroom position.

NORTHWESTERN UNIVERSITY
A "customized" Impinger
How do you pull off showcasing "new" equipment without actually purchasing any? Just ask Paul Komelasky. He did it by cutting holes in existing servery walls.

As Sodexho's district manager at Northwestern University in Evanston, IL, Komelasky had set up a pizza-producing impinger oven behind a wall in the kitchen of a residential dining hall because that was the only place it would fit.

"But as far as the students were concerned, we were serving ‘mystery pizza,'" he says. "They couldn't see it being prepared, and it lost its marketability as a fresh-made product."

So over summer break two years ago, Komelasky had an arched opening cut out of the wall between the servery and the kitchen, right where the impinger oven sits on a counter. He then had "brick" facing installed on the servery side. Suddenly, the site sported what appeared to be a brand new brick pizza oven.

"Now students can see where the pizza is coming from, and it's really improved their impression of its freshness," he says. Also, since staff no longer has to walk around the wall to access it, they're more available for customer service or front of the house finishing work.

That same summer, Komelasky also renewed the grill station by cutting another section out of a different wall, relocating a light switch, and turning the grill around so that it, too, faces the customers. "Employees can be right there and interact with customers now; they don't have to run back around the wall to operate the grill."

Tying it all together with a refresh of the dining area, including the purchase of new sofas and upgraded chairs and tables, Komelasky achieved renovation-worthy results with minimal costs. "It shows you can find ways to improve your facility's look-and-feel and results without necesssarily having to spend a lot of money," he says.

HUMANA, INC. VENTLESS HOODS
The Need to vent
With no kitchen, no hood system, no formal cafeteria, and nearly 5,000 people in the Humana, Inc. service center building in Louisville, Director of Associate Programs & Services Patty Guist had to be inventive to add prepared food offerings to the limited menu of the center's existing c-store operation. And while building constraints rule out new construction or major retrofits, Guist is always looking for ways to improve the offerings that are available.

Expanded vending, a sandwich kiosk along with a "no-hood-required" oven and a steamer tucked into a small back of the house answered some of center's needs.

"But what the customers really wanted was fries," Guist says. By purchasing a ventless fryer system a few years ago, she was able to please those customers and expand the menu, pulling in an extra 200 sales a day.

Based on that positive experience, Guist is about to add a full ventless hood system in a converted break room area, which will make possible the addition of an impinger oven and flat top grill.

"This is an old, 12-story building, and there's no way we could put in a complete, new exhaust system here," she explains.

"But going with ventless hoods allows us to bring in some bigger capacity equipment and expand the menu. Our hope is to get at least 60 percent of the people from this building to buy their lunch here once we reopen in September."

DCH WOOD SMOKER
Up in Smoke
At DCH Regional Medical Center in Tuscaloosa, AL, Director of Nutrition Services Dexter Hancock was in the planning stages for a major renovation of the hospital's dining facilities, when consultant Paul Hysen suggested a piece of equipment not typically found in healthcare foodservice—a smoker. Hancock immediately liked the idea and the menuexpanding possibilities it presented.

"We thought it would help us do some interesting things with the menu, and that has certainly turned out to be the case," he says.

Offering a variety of smoked meats, fish or poultry seven days a week, Hancock and Executive Chef Gary Lane serve up sampler platters with ribs, shrimp and turkey; tossedto-order salad with smoked chicken; pork loin; steak Diane; brisket, and more. They placed the smoker just behind the Chef's Table in the servery, where it's visible to customers, who enjoy seeing the meats removed and prepped.

Hancock notes the smoker was easy to adjust to as well. It took him and his staff "a couple of months," mostly just to figure out where to get a reliable supply of the right kind of wood (that now comes from a local sporting goods store) and which chips to use (applewood is Lane's favorite).

"It's definitely worth it," he says of the approximately $14,000 investment. "I would recommend this to anyone looking to add variety, upscale offerings and interest to the menu."