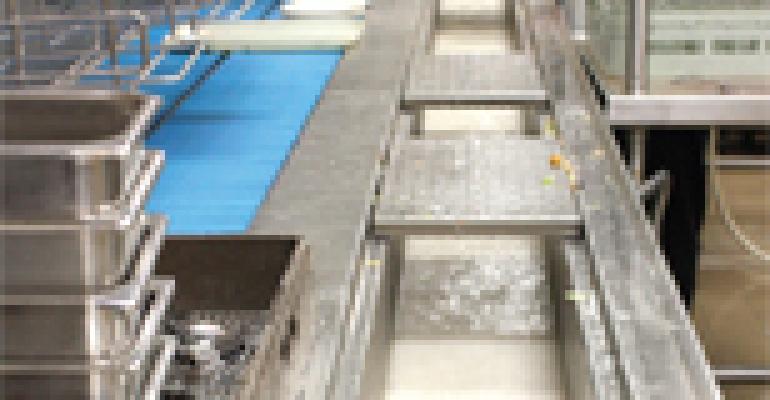 Choosing the best waste disposal system for your operation can reduce drudgery and odor.

Waste and garbage handling is not a glamorous issue, however, how to get rid of waste economically and in an environmentally sound way is a major challenge faced by many if not all operators. How you dispose of waste at your restaurant can impact your perception in the community. Waste has become a political and community issue as well as a cost concern. Mishandled garbage can impact your guests' experience too, especially when there are odor, insect, and rodent problems. Some waste issues occur after garbage leaves the kitchen, but here we will examine the application of various types of equipment used in disposing of waste before it is outside the kitchen.

Using the most effective equipment can greatly help the overall waste challenge. Disposers and pulpers are two types of kitchen equipment that can assist in reducing waste in your operation.

Garbage grinders or waste disposers can be used in several locations in the kitchen to solve some of your waste handling problems. They also provide the convenience of getting rid of some the bulk waste at the spot it is generated in the dishwashing room, at preparation sinks, and potwashing areas. These devices grind food waste into small particles which are then washed away in a slurry mixture of waste and water into the municipal sewer system. Disposers all work in essentially the same way. Food waste is shattered or broken into small particles when protruding bars attached to the rapidly revolving rotor collide with the waste. The food waste is continually shattered until it is broken down into pieces small enough to be washed through a sizing ring, a fixed ring around the perimeter of the disposer cavity. All the while the waste is being shattered, it is being mixed with water to form a slurry to help was it wash through the unit and into the sewer system.

Most manufacturers make units that can be adapted to fit in the bottom of a sink, at the end of a dishtable trough, or in its own cone-shaped basin. All manufacturers make grinders in a variety of horsepower ratings, one of which will match your application. In most restaurant applications, a range of one to five horsepower units will be adequate for the operation's needs. Generally, the dishroom will require a 3 to 5 horsepower model while a preparation sink may only need a 1 or 2 horsepower machine.

If you don't currently have a disposer in your operation, check with the local plumbing department first to be sure they can be used in your area. Areas vary widely on their support of garbage grinders, based primarily on the adequacy of the municipality's sewage system. Many city sewer systems can no longer handle the bulk of food waste from restaurants and have either banned disposers or placed excessive sewer taxes on the operations using disposers.

Other cities see disposers as an environmentally sound way of reducing health hazards associated with food waste and reducing waste going into landfills.

Operations on septic systems should not use disposers. Foodservice professionals and workers generally agree, disposers are beneficial in saving labor effort and in reducing waste-associated hazards and odors, but what if disposers are not permitted?

There are other options to consider. The objective always is to reduce waste at the point it is generated - in your kitchen.

A pulper is a disposer which, rather than dumping the waste slurry into the sewer system, operates in a self-contained environment. The waste is separated from the water with a piece of equipment called a water press, extracting water from the waste while allowing water soluble matter to be flushed down the drain. Waste odor is reduced significantly since many odor-causing materials, such as proteins and milk solids, are for the most part washed away. The result from the water press is damp, grayish, pulverized materials which can then be removed from the building.

Depending upon the makeup of your waste, this pulverized material can often be composted. There are vendors in most every city that will pick up the “pulp” and compost the material, sometimes at no cost to you. Your operation winds up saving money and helping the environment by reducing landfill waste at the same time.

There are also elaborate pulper systems which transport the ground slurry mixture from the point of generation to a remote trash room. The water press is situated in the trash room to dump the extracted waste directly into containers which can be removed from the premises. This engineered system saves some labor and can be much more sanitary than typical systems.

However, the system needs to be well maintained which is why it is sometimes reluctantly recommended except in very large institutions. Another advantage to pulpers is that they typically use less water than disposers because they recirculate most of the extracted water. In a dishroom, a large volume of water can flow in a dish trough to rinse dishes without dumping it all down the drain.

One of the newest items on the market is the compostable waste decomposer. This unit is essentially a large stainless steel box that takes compostable waste and in a period of less than 24 hours turns it into what is called a humus rich “soil amendment” which means it is similar to products you might buy for your home garden by allowing natural organic decomposition to occur and speed up by applying heat to the material. No other chemicals or enzymes are used. This equipment is perfect to be used in conjunction with a pulper to “go green.”

Scrapping collectors are made primarily for areas prohibiting disposers. The collector is a perforated pot in a sink with water recirculating through it. Some units are made to fit the end of a dish trough and others are made to use as a scrapping sink.

The item will collect food waste and wash away some water soluble materials for some reduction in volume. A good location for the collector is in dish rooms that use a trough to scrape dishes. It eliminates the additional time needed to scrape dishes into a garbage can and rinse them before washing. For the right application, collectors can be an inexpensive alternative to a costly pulper, although not nearly as effective in waste volume reduction.

Waste disposers and pulpers can offer some very definite advantages and cost savings that can be attributed to making proper choices in units. Disposal equipment can really reduce the amount of odor-causing waste you need to worry about holding in trash bins or compactor/container units outside you establishment.

Some of the drudgery and muscle required with dumping waste into large compactors outside your facility can also be eliminated.

Dan Bendall is a principal of FoodStrategy, a Maryland-based consulting firm that specializes in planning foodservice facilities. A member of Foodservice Consultants Society International (FCSI), Bendall can be reached at 240-314-0660.