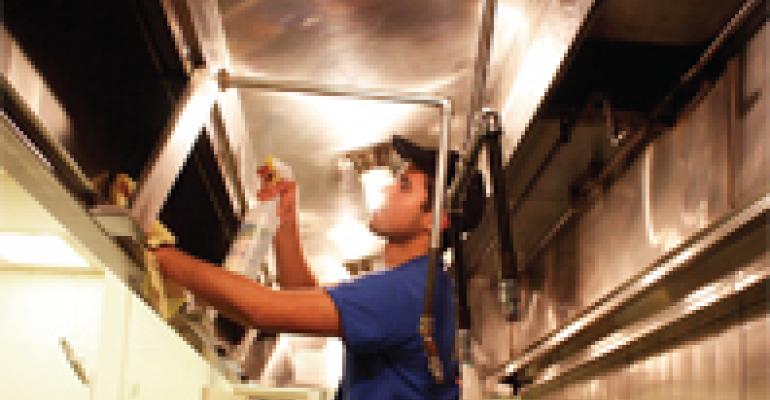 What's Under the Hood?

Exhaust hoods are critical to managing air quality, safety and energy costs. Pay them the attention they deserve

Exhaust hoods are probably the least appreciated and most misunderstood equipment items in the kitchen yet they are one of the most important. Exhaust hoods or ventilators, as they are sometimes called, help make kitchens safe and more comfortable for the people who work in them.

Exhaust hoods are also usually one of the biggest energy hogs in the kitchen. Many estimates suggest as much as 75% of an operation's heated and cooled air is sucked out through exhaust hoods. That's money going up the duct! If you can reduce the exhaust air and still remove smoke and fumes, you can save your operation a lot of cash.

It's important to understand how an exhaust hood functions. To remove contaminated air from the area around cooking equipment, an air curtain is created between the cooking equipment surface up to the point where air enters the hood.

Effectively creating an air curtain of air at the proper air velocity (known as the “capture velocity,”) will keep smoke and heat from spilling out into the rest of the kitchen. This is not always directly correlated with the amount of air moving through the exhaust hood.

A secondary objective is to remove grease from the exhausted air before it contacts the building's ductwork and exhaust fan. All exhaust hoods have some sort of device for removing at least some small particles of grease from the air stream.

Hoods or ventilators are available in a wide variety of price ranges, although most operators consider even the low end rather pricey. Low-end, basic models can be purchased for about $500-600 per foot of length; some premium automatic wash styles can be nearly three times that. These costs add up quickly.

A typical cooking bank of five appliances will require a 16-17 foot hood, a fire protection system, ductwork and an exhaust fan, costing about $15,000 on the low side and often much more. Costs tend to vary on how effective the model is at extracting grease from the exhaust air stream and how difficult it is to clean the unit, or whether it cleans itself. Hoods engineered to remove less air while providing more effective “capture” are generally more costly. Some owners are willing to pay this premium because it reduces hvac costs and can save money over time.

Hoods and fire protection systems contained within have more legal requirements than any other equipment in the kitchen. Typically, the health department is concerned about sanitation, the fire and building departments are worried about fire hazards, and an environmental agency is often worried about smoke emissions, not to mention your insurance company raising your rates to cover the hazards. In all cases there must be an automatic fire suppression system in hoods over most types of cooking equipment.

New requirements within the past few years call for more fire protection than older installations, so be prepared to enlarge your system to meet current regulations if you renovate or make equipment changes in the cooking lineup. A new fire suppression system can be costly, usually several thousand dollars, as well as requiring some down time during installation.

A very important consideration in hood operation is comfort. A properly engineered system will call for more air being exhausted than is returned to the space; the kitchen is referred to as being under “negative pressure,” a desirable state. Negative pressure helps ensure that cooking odors don't escape into the dining room or other public spaces.

Hood maintenance requirements depend on the type of hood. Mechanical maintenance usually isn't requried since hoods have no moving parts, but the units do need to be cleaned on a daily basis. Removable filters in hoods should be cleaned daily by removing the filters and scrubbing out the grease or washing in a dishwasher. Cleaning intervals may be less for filters above non-grease producing equipment but do keep the filters and hood surfaces clean so grease doesn't build up and become a fire hazard. Ductwork requires regular maintenance also to prevent it from becoming a potential fire source. The National Fire Protection Association (NFPA) a nearly universally accepted standard, requires inspection of the fan and ductwork for grease build up and fire hazards every six months by a qualified vent cleaning service.

More expensive hoods have water wash features which do much of the cleaning for you with a timed hot water and detergent spray of the hood's interior; these are labor savers. When comparing costs, remember to be sure there is a drain and adequate hot water supply for these kinds of units. Detergent which is automatically dispensed also needs to be factored in to the cost.

Hood exhaust is measured in cubic feet per minute (cfm). As a rule, it costs $3 or more per year in heating and airconditioning costs for each cfm of air your hood extracts, depending on regional differences and utility rates. If you compare a high efficiency hood to a traditional hood of the same length that exhausts 3,000 cfm, you will save up to half the air quantity (1,500 cfm) or $4,500 or more per year in heating and cooling bills. You should do your own analysis of payback times with the help of your local utility company.

Another exhaust air saver which most operations should consider is the use of a variable speed fan control system that monitors the air entering the hood, sensing when little or no cooking is going on. In down times or when cooking is light, the control automatically reduces the volume of air being exhausted. Some sensor units monitor only temperature in the hood and others may also monitor smoke. Many operations have shown paybacks of a year or less for these systems.

If someone says a hood doesn't work or is broken, don't believe it. If a hood was sized properly for the job, it will work. What may not be working is the fan or ventilation system. If you are having exhaust problems, call a ventilation expert. Hoods are susceptible to many external factors such as cross drafts that can impair their performance.

It is easy to ignore hoods if they are doing their job and to forget how complex they are and how much of an investment you have in them. Don't hesitate to seek expert advice to make the best equipment selection or to make the most cost-effective choices.

Dan Bendall, FCSI, is a principal of Food-Strategy, a Maryland-based consulting firm that specializes in planning foodservice facilities. He can be reached at 240-314-0660.