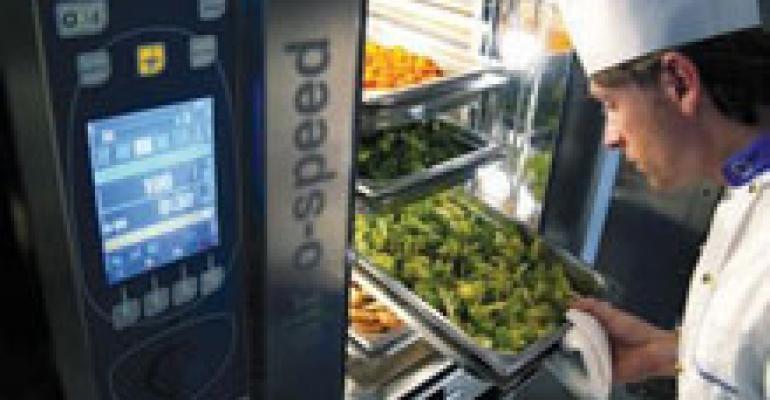 Only a few years ago combi ovens were an exotic hybrid found in only "gold plated" kitchens. Today their popularity has grown so much that they are commonplace in many types of operations.

If you ask a chef to name the most productive pieces of equipment in his or her kitchen, the combination oven/steamer is invariably at the top of most lists. Many will say the combi is the heart of the hot food production line. Others use it to finish more items on the menu than any other piece of equipment.

The really great thing about a combi is its flexibility. A wide variety of menu items can be wonderfully baked, roasted, and steamed in one unit. Products that are all too often dried out in conventional ovens come out of a combi tender and moist.

Essentially an oven/steamer, the combi can do everything either a steamer or a convection oven can do and in many cases better than either. The combi can bake and roast like a convection oven; steam and poach like a steamer; and reheat or cook a product without drying it out. Some models offer additional specialty modes using hot air and steam to defrost, rethermalize, poach or gentle steam, and warm.

Steaming vegetables and fish is easily controlled in a combi and some users say their best baked pastries and rolls come from these units.

Breads and rolls baked in the combi mode will be fluffier and have more oven spring than those baked in traditional ovens. Rethermalizing leftovers and heating prepackaged frozen convenience foods also works well in the combi mode to reduce drying and over-browning.

A Space Miser
As we all know, today's kitchens are shrinking because we can't afford the luxury of space found in many older kitchens. The combi takes up about half the space of a convection oven and steamer. The space saved can translate into cost savings as well.

Still, the typical combi is an expensive purchase. To help address this, several manufacturers have engineered and are about to introduce economy lines of boilerless combi ovens that will appeal to operations on a budget.

Going Boilerless
By eliminating the expense of a boiler, the resulting steamer/ovens cost about 15-20% less than the typically sized counterpart. The major drawback is slightly reduced steam output, which is needed in high volume fast cooking. But for many applications, the difference in the units is not noticeable.

Boilerless units have opened up an additional market for combi ovens to make them available to even more operations. An added benefit offered by boilerless combis is that they reduce liming problems due to hard water. Over half of combi maintenance problems are due to excessive scale and lime buildup, which can be minimized in a boilerless model.

The oven/steamers on today's market range from small volume countertop units to floormounted roll-in units with large capacities for banquets or institutional use. Typical sizes are stated by manufacturers in standard steamtable pan (12 x 20-in.) or baking sheet pan (18 x 26-in.) capacities. Note that shallow 2 1/2-in. pans are typically used in the sizing ratings. You will need to reduce capacity accordingly if using 4-in. or 6-in. pans that would be most typical for casserole items or lasagna.

Most manufacturers make several of the more popular oven sizes. The models most available are the four to six 12-in. x 20-in. pan countertop unit, a seven- to ten-pan unit and the larger floor or stand-mounted 14, 18, and 20-pan models. The smaller units generally hold only a 12-in. x 20-in. pan or half-size baking pan. The larger units hold two 12"x20" pans on each shelf or a single 18-in. x 26-in. baking pan. At least one manufacturer makes a specialized rotisserie combi great for displaying and cooking rotisserie style chicken or other products. The unit can also be converted to traditional shelves for cooking other products.

A primary consideration is whether you'll be using gas or electric power. All sizes and styles are generally available as electric units. If you are using an electric unit be sure you are wired for the significant load these units demand. For example, a ten steam table pan unit requires between 13 and 19 kilowatts to operate.

Although gas units are produced by some manufacturers, they are usually more expensive and available only in certain sizes. Generally, smaller units are only available for electric operation.

As with all steam equipment, the quality of water going into the combi is vital for good equipment performance. Most manufacturers definitely recommend a water filter for the equipment. Have your tap water tested for hardness and use filters to correct the level to within the standards the manufacturers recommend.

It also pays to have a regular program for deliming. Some fullfeatured ovens have a program that automatically recognizes when to delime and alerts the operator. When activated, the combi then goes into a deliming cycle using chemicals supplied from a special reservoir.

Most units are fully stainless steel inside and out with a glass window. They are generally easy to clean although several models have a built in spray hose for washing out the interior that helps in the cleaning process. Meat probes are not standard with some units and should be purchased, especially if a lot of meat roasting is planned.

One important but often overlooked consideration is a side shield, required on some units. The side shield is used when the oven/steamer is next to other cooking appliances and prevents the item's electrical controls from getting overheated. The solid-state and computerized controls are very sensitive to heat and can easily be damaged if in the vicinity of a range or broiler.

Other advancements are also coming, such as enhanced fan design for more even air movement and better self-cleaning options for those who want to pay for this labor saving feature.

Dan Bendall is a principal of FoodStrategy, a Maryland-based consulting firm that specializes in planning foodservice facilities. A member of Foodservice Consultants Society International (FCSI), Bendall can be reached at 240314-0660.