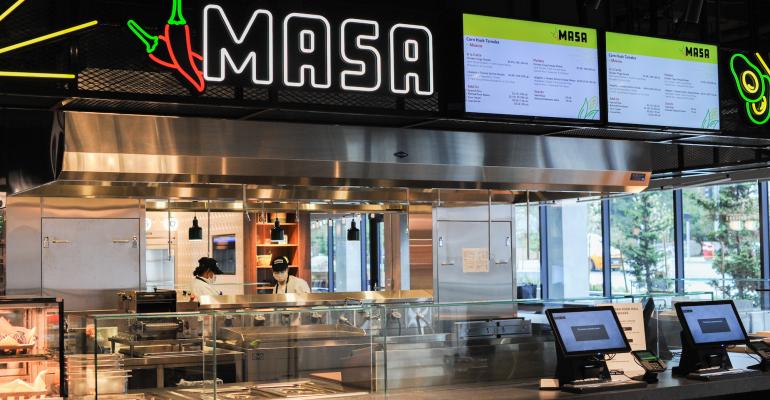 Microsoft has seen the future of cooking and it is positively electric. In fact, it’s all electric…

Bucking decades of practice that required most large-volume food production to rely on gas, not to mention centuries of chef fascination with flames and fire, the company and its dining program partner Compass Group set out to change all that with the first of a planned series of all-electric dining venues that will eventually encompass some 77,000 square feet of all-electric kitchens in Microsoft’s new East Campus complex next to its existing one in Redmond, Wash. It’s all part of the company goal to be carbon negative by 2030.

The LEED Platinum One Esterra is the most sustainable building on the Microsoft campus. It opened this past March with nine premium food stations menuing everything from diner and deli classics to cutting edge Latin, Asian and vegan dishes, augmented by a rotation of local commercial restaurant guest appearances. (For a photo tour of One Esterra, go here.)

It’s all part of One Esterra’s multi-faceted contribution to Microsoft’s mission to embrace sustainability, technological innovation, diversity/inclusivity, wellness and accessibility, all in an eye-popping facility created and built by a team composed of representatives of Microsoft, Compass, architect Bora, kitchen designer Clevinger Associates and contractor Lease Crutcher Lewis. Meanwhile, equipment to make mass electric production that replicates the dish quality results of gas production as closely as possible had to be custom-designed in partnership with equipment manufacturers.

Sustainability is also enhanced by sourcing produce used in the menus through local farm partnerships, while the program’s commitment to diversity and inclusivity is advanced in part by using Products with Purpose/Diverse Partner Spotlight products to build awareness & support for women, minority & LGBTQIA+ owned brands.

The nine restaurant concepts in One Esterra are…

One Esterra also includes Espresso, a station featuring local, diverse-owned coffee brand Boon Boona Coffee, and On the Go, a centralized location offering custom-branded packaged meals. On Floor 4 of the facility, the frictionless [email protected] Store sells snacks, beverages, treats and other convenience items—including from local, diverse and minority-owned suppliers—while kitchenettes on each floor offer complimentary coffee, water, juice and soda while piloting the use of durables to reduce waste. Two catering spaces have multi-purpose rooms available for meetings and events.

One of the stations at One Esterra is Eat Local, which rotates fare from local restaurant partners with diverse ownerships.

One Esterra is a 100% cashless and cashierless café where customers place and pay for their orders on touchscreen devices that run on a Microsoft platform. Their order number then appears on an Order Status Monitor screen, showing as blue when the order is in progress and changing to red when the order is ready. All-digital displays are used to communicate menu offerings.

Meanwhile, the [email protected] Store features Zippin technology that uses cameras and shelf sensors to track purchases and charge customers when they leave the space via their app. The shelves even use electronic labeling and braille so everyone can experience the space. Online ordering is available for employees via the MSDining and Microsoft MyHub apps.

“It was a daunting idea to do this while not losing who we are as a culinary organization, so along with Compass Group we drilled down to what we were not willing to compromise on programmatically,” stresses Jodi Smith Westwater, senior services manager for dining operations. In going all-electric, there were four key areas to address, she explains.

First, there is the variety and diversity of the food designed to serve the diverse Microsoft community with authentic cuisine choices from around the world, a longtime point of pride for the organization. “We didn’t want to eliminate any food category and say we can’t do that anymore,” she says.

The second was authenticity—that the food retain its traditional flavor profile despite a change in cooking medium—while the third was speed of service—any changes in cooking medium couldn’t cause delays in prep time—and the last was what Westwater refers to as “exhibition”.

“We’ve spent a lot of time over the years creating these immersive dining experiences, and we wanted to still have some exhibition style equipment pieces even without fire,” she explains. “The goal was that if these four areas could be satisfied, then why not go ahead?”

To make it happen, Microsoft leaned heavily on Compass and its relationships with equipment manufacturers to develop volume scale electric solutions.

“Compass kind of led the conversations for us, working with companies to develop things like an induction wok, a radiant rotisserie and a rapid recovery plancha griddle, all of which never existed before at the size and scale we needed,” Westwater says.

An electric rapid recovery plancha griddle was one of the new pieces of equipment developed for One Esterra.

One positive side-effect of the pandemic-induced slowdowns was that the culinary team had time to devote to testing and getting familiar with the new equipment solutions.

“We were getting two, three, four different iterations of the induction wok sent to us, for instance, and we had to be able to do a lot of menu and culinary recipe testing to figure out how to do it right,” she notes.

That mostly fell to the culinary pros on staff, who were initially skeptical, to say the least…

“We had an opportunity to test equipment and I think that was key because, when you think about culinary, it’s all about technique, so when you don’t have flame, you have to think through things like, what is your recovery time and where the heat zones are,” explains Craig Tarrant, director of culinary operations at Microsoft for Compass’ Eurest Dining Services unit, who was among those testing the equipment candidates. “We were able to do that [because of the pandemic-related slowdowns] so that when we went to market, it was with the equipment we tested and had already pretty much vetted out all the issues.”

Tarrant stresses that neither Microsoft nor the Compass culinary team was willing to compromise either by defaulting to sticking with traditional equipment where electric alternatives weren’t available or where those alternatives didn’t meet the program’s quality standards. He cites charbroiling as an example where a solution is still pending. Compass is currently working with a manufacturer to perfect an infrared radiant heat charbroiler “that can still give us those diamond marks that we all get on our backyard barbecue.”

“I was fortunate enough to be part of the testing from the very beginning and I have to tell you, I was against electric because I’ve always felt I needed fire, I needed to see it, I needed to understand it, so I was very hesitant,” adds Compass Regional Executive Chef Jevic Acain. “I had already made up my mind that I willing to go along with it, but I figured it would never be as good as it is with fire.”

That attitude began to change when he started working with the new equipment. He cites the electric wok as an example.

“I’ve never worked with an electric wok,” Acain says. “Typically with a wok, the flame dictates how you’re going to cook, but the more we cooked with it and the more we understood it, it kind of dawned on me that it’s really all just muscle memory and cooking is cooking, whether it’s on fire or electric. As the training process went on, I started liking it because I was challenged with something different, something unique. At the end of the day, I thought the product was great and I actually enjoyed cooking in the [electric] wok. For one thing, with a traditional wok, I’d be sweating because it would be super-hot but with the electric one, I’m not even breaking a sweat.”

Electric woks posed both a technique and a psychological challenge for chefs used to working with traditional flame-heated woks.

Commercial kitchens traditionally are hot and noisy, he adds, something the electric equipment has helped mitigate, making the environment more pleasant for production staff in the process.

East Campus is a renovation of an outdated Microsoft complex that was torn down to make way for a totally new, ultra-modern one. When completed, it is slated to have five large-scale food halls, each with between 12 and 22 concepts, plus two full-service restaurant pubs, multiple Espresso and [email protected] Store units and a 30,000-sq.ft. catering kitchen “because we are at more than capacity with our existing catering facilities on campus,” Westwater notes, adding that it will also be the program’s first large-scale all-electric catering kitchen.

The entire 72-acre East Campus and its 17 new four- and five-story buildings—some three million square feet—will be powered by Microsoft’s Thermal Energy Center, which already has dug over 900 geothermal wells to provide clean energy and a ready source of power for clean electric food production

“The planning has actually been going on for five years or more,” Westwater relates. “Then, just before the pandemic, Microsoft put out some pretty ambitious sustainability commitments to achieve by 2030 around being carbon-negative and water-positive and reducing energy consumption. As part of that, we in Global Workplace Services (GWS), which includes our dining operations, began to look at what else we can do from a sustainability standpoint beyond what we’ve already done in areas like reducing waste, partnering with local farms and plant-forward menuing. This new build-out opportunity on East Campus was really the first time in a long time that we had an opportunity to think about it from an infrastructure standpoint and rethink how we cook and what the energy sources are.”

Working with Katie Ross, senior sustainability program manager of real estate & facilities who oversees sustainability for the GWS organization, the dining team looked at what else it could do—could it consider going all-electric, for instance.

“A typical Microsoft kitchen is 75-80% gas, so it wasn’t a small pivot,” Westwater explains. “Along with Compass, we looked around and asked, ‘Is this being done anywhere else?’ Obviously, electric cooking is not a new concept, but we soon found that at the scale to do the volumes we do at Microsoft, the equipment literally did not exist, so our biggest hurdle was to figure out how to do it.”

To make One Esterra fully electric, Microsoft and Compass worked with equipment manufacturers to design custom units that can replicate the volume production results of gas equipment.

Also, where to do it, and for that, there was a ready answer.

“We realized that we would have the One Esterra building, a new LEED based project that would open before [the full] East Campus, so we approached it as a beta test opportunity,” Westwater says. “Since we would have to figure out how to do all electric over some 77,000 square feet of kitchen space on the new East Campus, it was a great opportunity to start with 15,000 square feet in a single food hall location that would open about two years prior to the rest of the campus.”

Microsoft is not keeping the program’s innovations to itself, Westwater stresses. It plans to issue white papers on its findings this summer to share with the industry.

“One of the biggest elements of this for us is that we do not want to keep this information to ourselves. We want to make sure we’re being transparent in this journey that we’re on so others can follow suit. We really do see this as an industry disruption moment and we’re very proud and very humbled to be able to lead the way in this area.”