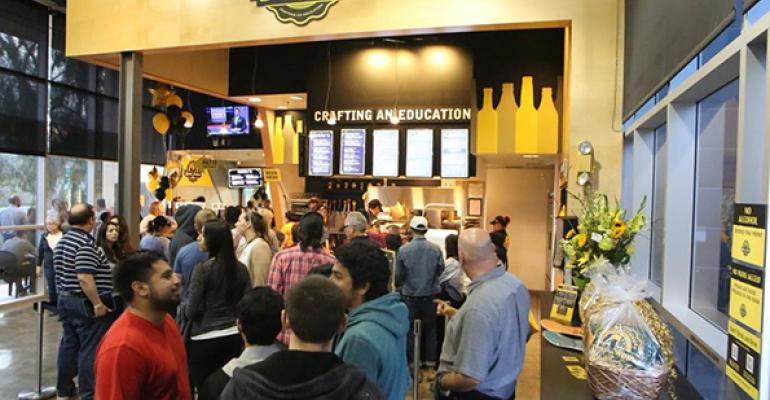 Innovation Brew Works serves as a prominent example of a foodservice outlet supporting an academic program. At first glance, it looks like a standard campus brewpub but it retails beers made at the site by students taking beer-brewing classes through Cal Poly Pomona’s Extended University program.

Located at the Center for Training, Technology and Innovation (CTTI) in the school’s Innovation Village area, Innovation Brew Works serves both the beers made on site and as well as select choices from nearby craft brewers, plus a food menu that consists of sandwiches, salads and pizza made fresh in front of customers. “There are approximately 6,000 tenants at the Village, and the intent is to have public-private interaction with our students who can learn by doing the discipline that they have chosen to follow,” says Foodservice Director Aaron Neilson.

The location previously had a small Peets branded coffee shop that served as an amenity to CTTI tenants but was not very profitable.

“We wanted a concept that was cutting edge and would draw from not only Innovation Village and the University, but from the community at large,” Neilson says. “We have met this goal, as the makeup of our customers is an equal amount of all three constituencies. Our product cost is dropping, and we are now beginning to attend and participate in beer festivals. This will get the Cal Poly Pomona University's image as well as our brewery's beers into the community.” 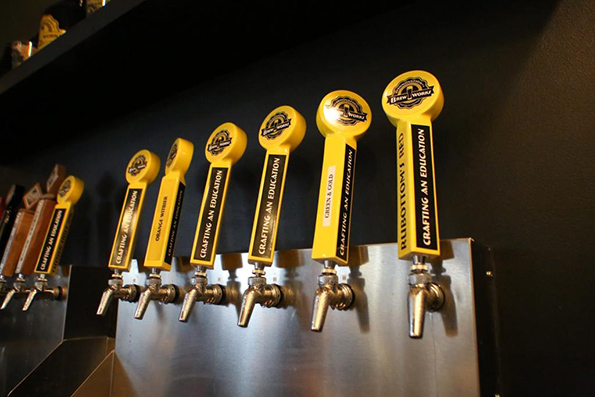 The school spent $700,000 on design and construction costs, which were mitigated as half of the brewing equipment (about $35,000 worth) was donated. Initially, there was an issue with the local Alcoholic Beverage Control Board mistaking the purpose of the brewery operation as commercial rather than educational, Neilson says.

“We hired a consultant [who] was able to assist in navigating the quagmire,” he says.
Innovation Brew Works now has a type 23 license, which designates it as a “small beer manufacturer.”

“Our plans were initially approved by the state fire marshal, then later in the project they told us we had to [install sprinklers in] the entire building,” Neilson says. “The Brewery Cafe takes up about 5,000 square feet and the whole building is 25,000 square feet. This put us behind in opening [as] we could not brew until final approval and inspection from the state fire marshal, which we obtained in late December 2014. We had our first beers ready when the students returned for the winter quarter.” (The venue actually opened in October but was limited to serving food and beers from outside vendors.)

Neilson plans to use the NACUFS survey tool to measure satisfaction, but if revenues are any indicator, Innovation Brew Works was a hit in the early going, with revenues not only quadrupling the coffee shop’s results in the space the year before but also almost doubling the budgeted number for this unique campus dining operation.