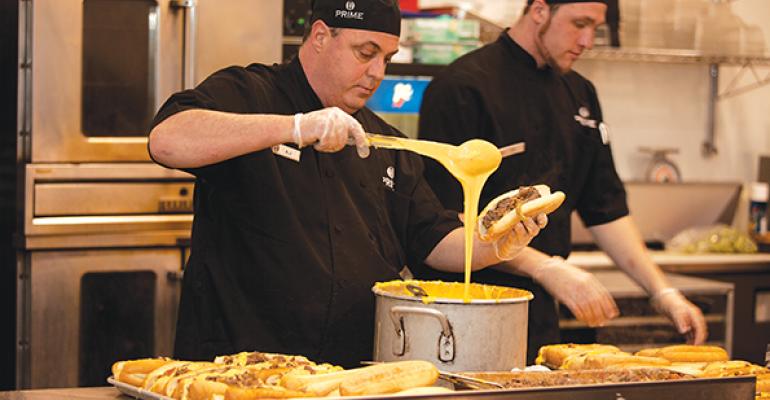 The foodservice firm turns meal service for construction crews into a hospitality enterprise.

In 2011, a small recent startup foodservice firm called Prime Business Dining landed the contract to operate the administrative cafeteria inside the huge manufacturing plant being planned by semiconductor giant GLOBALFOUNDRIES in Malta, N.Y., about 20 miles north of Albany.

It was a major deal also sought by some of the largest foodservice contract firms in the industry, and to win it, Prime had to certify that it could satisfy all the requirements sought in the RFP. But the small company, a division of regional commercial restaurant firm Mazzone Hospitality, also had one thing its competitors didn’t: experience at the site.

For almost two years previous to the awarding of the cafeteria bid, Prime had been operating onsite foodservice for the thousand or so construction workers on location to build the massive, $4.6 billion facility, reportedly the largest construction site in the United States. Over that time, Prime not only demonstrated an ability to handle mass feeding in short time windows, but also to do it with an aplomb that far exceeded the premade sandwich/cold case-level expectations of the construction company (M+W Group) overseeing the project.

The ability to handle the volume is no surprise. Mazzone’s broader operations include not only commercial restaurants but also extensive catering and event foodservice for large numbers. 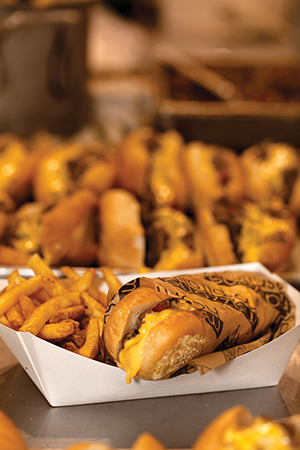 But as for the quality of the food being served, which includes plenty of scratch-made choices produced on site, “It’s just how our company was built,” says Tim Vennard, vice president of Prime Business Dining for Mazzone Hospitality. “We are caterers and restaurant people, so our goal has always been that customer satisfaction is No. 1, no matter what and really at any cost. We don’t buy anything that’s premade and every meat protein is fresh. We make every salad dressing, every sauce, every soup. We pride ourselves on being a scratch company as much as we can and we feel that whether you are a construction worker or an executive, you should be treated the same. Make great food and give great service and everything else takes care of itself.”

Still, it would be quite a stretch to produce so many scratch items in any sort of traditional field kitchen or temporary dining facility. But what Prime has at the Malta construction site is hardly traditional. In fact, it is a full production kitchen that traces its genesis to the determination of Mazzone Hospitality owner Angelo Mazzone back in the economic slump of 2008-2009 to find additional revenue streams for the company.

That search had led Mazzone to purchase a storage container car—like the kind used to carry product on trains, trucks and ships—and refurbish it into a fully functional production kitchen complete with hoods, ranges, fryers and ovens that could be transported to where it was needed.

It was needed at the GLOBALFOUNDRIES construction site in Malta in 2009 after Prime won the bid to feed the crews there, and that’s where it remains to this day, turning out up to 4,000 meals a day to hungry construction workers.

The food is served inside The Foundry, a huge 8,000-square-foot, 425-seat tent adjacent to the production kitchen unit (state codes don’t allow cooking in tents) that can serve thousands of construction workers even during the lunchtime crunch with an efficiency that allows them to get in and out in an average of six minutes. 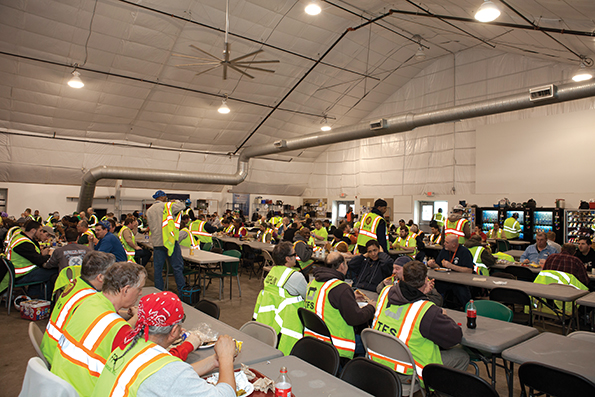 UNDER THE BIG TOP: The primary dining venue for construction crews is The Foundry, an 8,000-square-foot, 425-seat tent next to the production kitchen.

In the last two years, as construction crew numbers have swelled up to fivefold and operations across the sprawling site have scattered more widely, Prime diversified its dining operations, adding two new food trailers, a satellite kiosk called Foundry Junior and two custom-built smoker units that produce enough meat to feed 4,000 a day. Additional indoor and outdoor seating for up to 800 was also added.

Chuck was purchased in the summer of 2014 from a local vendor to complement Larry with a traditional menu that includes breakfast items like egg sandwiches, pancakes, fruit and pastries, and lunch items ranging from burgers and chicken sandwiches to fries, burritos and daily specials.

Foundry Junior, which debuted last fall, offers a condensed version of The Foundry’s full menu, including the special of the day. Located about a mile from The Foundry, it offers a more convenient alternative to those working too far from the main eatery to access it conveniently during their lunch period.

A second smoker unit is part of The Foundry production operation. Together with the one in Larry, they produce up to 300 pounds of smoked meat daily, from ribs, half chickens and briskets to pork butt, leg of lamb and even prime rib, which is the special of the day every other Friday. 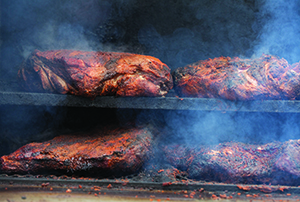 SMOKE â€˜EM IF YOU GOT â€˜EM: The site has two custom-built smoker units, one attached to a food trailer.

For those looking for quality meal choices after that, last winter Prime installed a refrigerated fresh food vending machine holding sandwiches, salads, parfaits, reheatable entrées and healthy snack packs with veggies or hummus made fresh in the onsite kitchen.

As at its other B&I sites, Prime operates Global Café with substantial onsite autonomy for its chefs.

“Our goal isn’t to pigeonhole our chefs and tell them, ‘You have to do X, Y and Z,’” Vennard says. “We don’t really follow cycle menus. Rather, we give chefs parameters on what they can spend on the protein, the vegetable and so on.

“We want to encourage them to be chefs and be creative rather than having a guy in an office somewhere telling them, ‘This is what you have to serve.’ That really kills morale and they end up running it not like they own it, but like they are robots.”