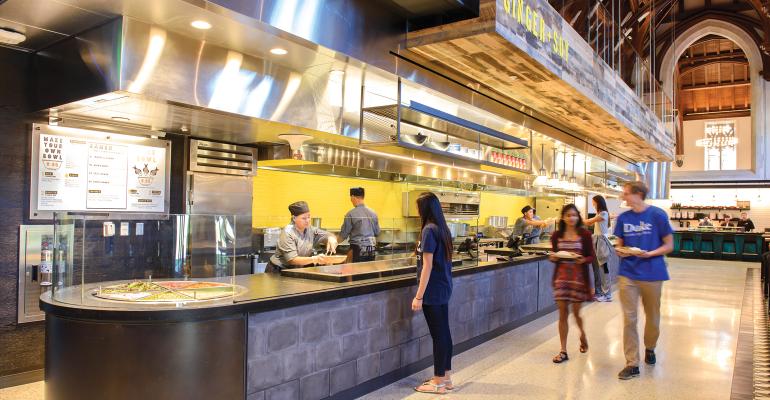 With the opening of West Union Market this fall, the reinvigoration of campus dining at Duke University took a major step forward. The West Union project followed the debut of East Union Marketplace earlier in the year and, together, the two eateries present students with nearly two-dozen different concepts, some in an all-you-care-to-eat environment and others in a high-end retail mix that includes a brewpub and an upscale steakhouse.

The new dining centers complement a foodservice environment that also includes nearly two-dozen retail concepts scattered around the campus, plus a rotating array of independent food trucks and delivery options from off-campus commercial restaurants during the evening and late-night hours when on-campus alternatives are not available or are limited. The food trucks and off-campus food deliveries can be paid for using Duke’s innovative Merchant on Points program, which allows students to use their meal plan points for these purchases. 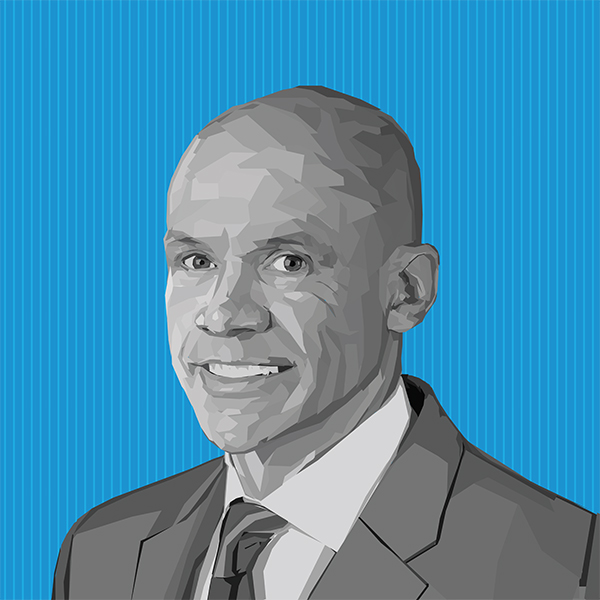 “Especially for the number of undergraduate students, they have quite the variety of choices,” summarizes Robert Coffey, director of dining services.

Previously a campus dining program that contracted to outside management companies to operate its venues, Duke has transitioned to a completely self-operated program under the leadership of Coffey and Rick Johnson, associate vice president of student affairs for housing, dining and residence life, both of whom came from Virginia Tech’s highly regarded campus dining program.

When it opened in January 2016, the renovated Marketplace residential dining facility on the east side of campus represented the first major step in the revamping of dining at Duke. Not only did the space feature a completely new set of upscale food stations, but the servery area was also enhanced with more room between stations to facilitate traffic flow and more seating and enhanced lounge spaces were also put in.

Also unusual about Marketplace is that it operates as an all-you-care-to-eat venue at breakfast, dinner and weekend brunch, but morphs into à la carte service weekdays for lunch service.

Marketplace primarily serves the freshmen living at that end of campus, and its upscale atmosphere helps integrate new students into the school’s dining culture.

Besides the renovated Marketplace, the East Union complex also features Trinity Café, a retail coffee bar concept that also received a recent upgrade and now stays open into the late evening serving a menu that includes pastries, smoothies, and grab-and-go sandwiches, salads and even sushi. 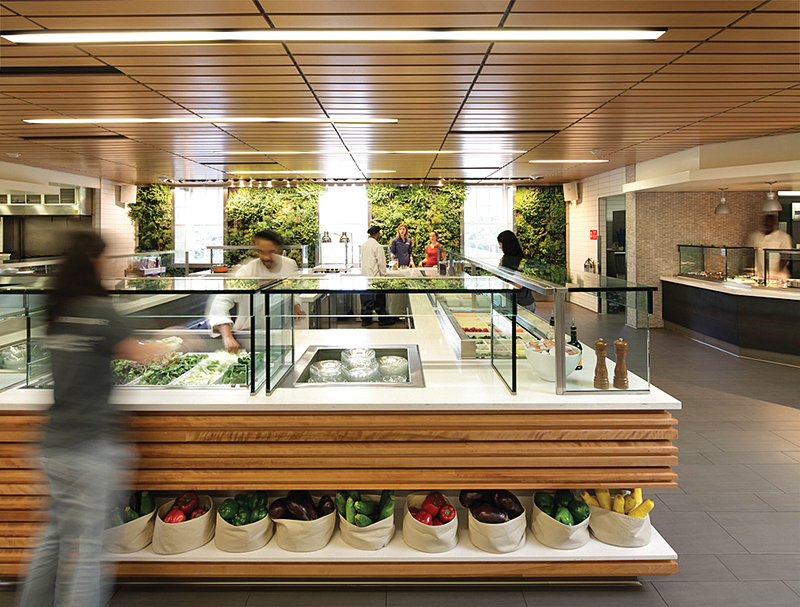 After Marketplace debuted, it was the turn of the other end of campus to get its own new multiconcept dining destination. And boy is it something!

Opened last fall, West Union is undoubtedly one of the most spectacular dining venues in the college dining segment, both visually and culinarily. Twelve of its 13 restaurant platforms are operated by local restaurateurs, though the brand names are Duke Dining’s own. The 13th is a unit of the national Au Bon Pain chain.

“We hand-pick the best of the best in the area of independent restaurant owners to come in and operate those facilities for us,” Coffey says, but if an operator should leave, “the name and equipment would stay and we would put in a new operator with no name change.”

Among the many highlights at West Union are JB’s Roasts & Chops, with its custom 8,600-pound all-wood fire pit; Skillet, which uses cast-iron pans to make its authentic Southern fried chicken; Il Forno and its pasta dough made fresh daily and cooked to order; Tandoor with its two copper tandoor ovens; and Café, where two nitro units turn out freshly made ice cream and gelatos to complement the station’s array of made-to-order sweet and savory crepes.

Asian cuisine cravings are satisfied with the Ginger + Soy and Gyotaku stations. Ginger + Soy fuses the various culinary traditions of East and Southeast Asia into a sizzling to-order concept that stimulates senses ranging from sight and sound to smell and taste, while Gyotaku is an expert fresh sushi stop with a range of ingredient choices.

There is also a Chef’s Kitchen exhibition station “like you’d see on a TV cooking show,” says Coffey, which is flexible enough to serve as a pop-up restaurant offering a variety of cuisines, and also serves as a teaching venue in the evenings. It also hosts celebrity chefs, starting with Mario Batali, who visited the campus in November to formally open the station.

West Union also includes a campus pub called the Devil’s Krafthouse that serves local craft beers. The concept mix is topped—literally, as it sits at roof level—by the Commons Steakhouse, an upscale, full-service fine dining restaurant specializing in premium steaks and seafood that gives the community a destination dining venue where guests can enjoy scenic views of the campus and the surrounding forest.

While the dining options are noteworthy in themselves, West Union is also visually striking, a “glass box” extending from foundation to roof that is enclosed on three sides by a 1930s vintage Gothic exterior. The glass building is transparent on the fourth side so those on the outside looking in from that direction can see all the activity within.

Letting in the outsiders

Offering adequate dining services into the later evening and early night hours poses a daunting challenge for campus foodservice operators. While some demand exists, it often isn’t enough to justify keeping more than a handful of venues open, which in turn sends students looking for more than the few available options to patronize offsite restaurants and c-stores, where there are more choices.

Duke has addressed this situation with a program called Merchants on Points, which allows certain off-campus restaurants to deliver food to the campus starting at 8 p.m. and, depending on the venue and day of the week, lasting well into the early morning hours.

This isn’t just a campus pizza delivery program either, though several nearby pizzarias, including units of national chains Domino’s and Papa John’s, are among the participating restaurants. Others include units of notable national brands like T.G.I. Friday’s, Dunkin Donuts and Jimmie John’s as well as over half a dozen locally famous eateries.

Supplementing the evening/night Merchants on Points delivery options are independently operated food trucks that are permitted to set up at designated spots on campus in specific time windows.

The trucks and restaurant delivery services are chosen with strong student input, including surveys compiled during a food truck rodeo event held each spring to decide which of the mobile eateries will be allowed on campus in the fall. Each new year generally sees one or two of the seven slots turn over to keep things fresh, according to Coffey.

The trucks and delivery restaurants can be paid using students’ meal plan points. It’s a win-win as the department gets revenue it would otherwise lose, while the vendors get increased access to campus business and the students get many more convenient evening/night dining options.

“It allows students up studying or working late somewhere on campus [to be able to] order late-night service and have it be part of the meal plan,” Coffey says. He describes the Merchants on Points options as “a supplemental part of the dining program.”