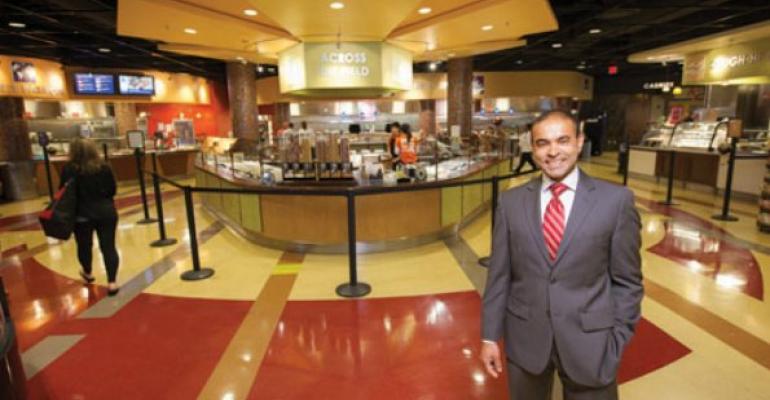 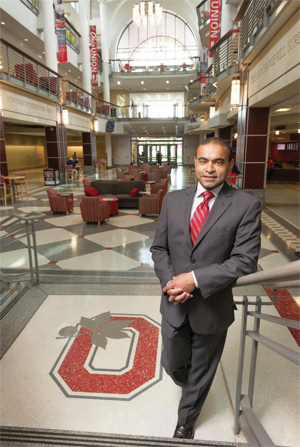 If you're going to spend any time with Zia Ahmed on his Ohio State campus, wear comfortable shoes. The senior director of dining services likes to walk and he’s got a lot of ground to cover.

With some 30 outlets spread over the sprawling 1,700-acre campus, Ahmed does most of his work on foot. The former dining director at the University of Akron walks four to five miles a day on average and has already become one of the most recognizable faces on a campus of 44,000 undergrads and nearly 57,000 students. His dining services department is fully funded and generates $55 million a year in revenue.

The state school that perennially ranks as one of the largest in the country has always faced the daunting challenge of keeping its undergrads on campus and away from the apartments, fast-food joints, restaurants and bars, takeout options and convenience stores just off campus. Since the late 1990s, campus dining has been on an upward trajectory and becoming more a part of university life.

Since Ahmed’s arrival almost four years ago, the pace has accelerated and the heights have escalated. The stakes are higher now, too, as Ohio State’s Second-Year Transformational Experience Program (STEP) will require all second-year students to live on campus by Fall 2016. A $370-million project is reshaping North Campus to make it possible and Ahmed is hard at work readying for an additional 3,200 students who will soon be eating on campus.

When Associate Director of Facilities Tim Keegstra started in Columbus as assistant director in 1986, he remembers dining services having just five traditional cafeterias. The first cash operation came almost a decade later with a carryout program and retail began to sprout from there. Sub shop Mirror Lake became the first standalone retail outlet in 1999 and still thrives today as Mirror Lake Creamery & Grill. A menu of sandwiches, specialty burgers, ice cream and more drives $10,000 a day in sales. 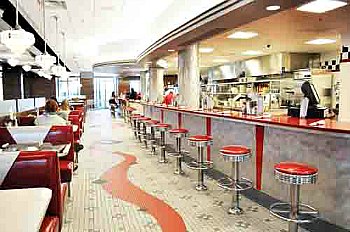 In 2004, retail and residential dining operations merged to create one cohesive unit and the modern era of Ohio State dining was underway. Around the same time, Marketplace on Neil opened and is now generating more than $5 million of business a year.

Like an urban public market, it offers an array of stir-fries, soups, wraps, pizzas, pasta and more at different stations, as well as an espresso bar called StreetSweets at the entrance. The Marketplace is currently in the midst of a renovation that will move a small convenience store into a new and larger space among other refreshes that Ahmed says are a part of the university’s regular five-to-seven-year renovation cycle.

From 2007 through 2009, Ohio State began opening several coffee shops that are now some of the most successful outlets on campus. Berry Café, located in the ground floor of the stunning Thompson Library, sells $2 million worth of coffee, grab-and-go sandwiches, salads and fruits on an annual basis.

In March 2010, six months before Ahmed arrived, Ohio State opened its new student union, a $118-million project. The three-story Ohio Union encompasses 320,000-square feet that Ahmed calls the “Disney World of Ohio State.” It features the Archie Griffin Ballroom, with seating for more than 1,000; a small theatre seating 290; plenty more meeting space and offices for many of the student and academic organizations on campus.

It also features a test kitchen for training, menu development and culinary events and four dining venues: Sloopy’s Diner, a 1950s-inspired 150-seat full-service restaurant; Woody’s Tavern, a pub serving pizza, subs and wings; Espress-OH; and the Union Market, similar to the Marketplace on Neil with a variety of stations including sushi, even. With annual revenue of more than $6 million, the Union Market is the top dining outlet at Ohio State. In total, the Ohio Union has nearly 900 employees and can drive half a million dollars of business in a good week. It also houses the catering department that now has first-class meeting space to host both university and non-university events.

Preparing for the Future

When Ahmed was hired in September 2010, the director from Akron was stepping into his dream job and a university in transition. Not only had the Ohio Union just opened, but the school would soon be changing its academic calendar from quarters to semesters. And although he didn’t know it at the time, the second-year housing requirement would soon increase his residential business by 25 percent.

Ahmed revamped the meal plan for the 2012 school year when semesters began, shifting the block program from a meal equivalency (entrée and sides) to a dollar equivalency that can now be broken down into half a meal so students have more flexibility with smaller items. 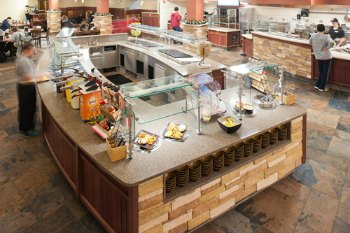 Traditions at Kennedy reopened after a $12.5 million rennovation in 2011

A year prior, after a decadelong push of retail operations, Ohio State turned its attention to cafeterias. Traditions at Kennedy—named for June F. Kennedy, who started the dining program in the 1920s¬—underwent a $12.5 million overhaul that shut down the facility for 18 months. When it reopened, the modernized all-you-care-to-eat hall looked more like a food court with multiple stations than old-school cafeteria.

The changes haven’t just been to buildings, either. Ahmed has helped reshape Ohio State’s culinary vision and restructured the workforce around it. Lesa Holford was hired as the associate director of culinary (corporate executive chef) and her primary responsibility is menu and culinary development.

“She’s looking at the whole picture, of how culinary fits into the institutional and dining service missions,” says Ahmed, who is also the incoming NACUFS president. She does not have any operational responsibilities, by design, and other chefs report to their unit managers so she can focus strictly on the culinary vision.

An example of the team coming together to perfectly execute an idea was this year’s introduction of limited time only menu items (LTOs). Holford and the team of chefs on campus debut LTOs at every dining outlet every four weeks, from coffee shops to dining halls. Most items are unique to their location and they are promoted onsite with special signage. The LTOs have inspired chefs to new creations, provided unique and ethnic offerings for students and been a great way to market test items that, if well received, could move onto the permanent menus.

Ahmed also hired an assistant director of nutrition and wellness, Gina Forster, who has helped dining services provide one-to-one counseling for those with special dietary needs. Both new hires have helped provide Solutions stations at the three Traditions dining halls that provide fare for those with vegetarian/vegan preferences and gluten-free and other dietary restrictions.

With the increased culinary focus and vigilance on dietary needs, not to mention the additional 3,200 students living and eating on campus when the North project is complete, Ahmed’s focus has been increasing the quality and quantity of the food that drives his $55 million operation.

In January of this year, dining services moved from a commissary style kitchen to a Culinary Production Kitchen a short drive from the department’s offices. The 17,800-sq. ft. space was running at 40 percent of its potential capacity at the end of this school year. By next fall, Ahmed expects that number to climb to 60 percent and by 2015, closer to 90 percent when the new North Campus dining venues open a year ahead of the residence halls.

Seventy-eight students worked in the CPK in April, but closer to 200 will be there this fall when most grab-and-go sandwiches, salads and some bakery items will be made there, while soups and sauces will slowly be added to the mix.

“The biggest challenge for me is seeing the potential here and not getting ahead of ourselves,” Ahmed says. 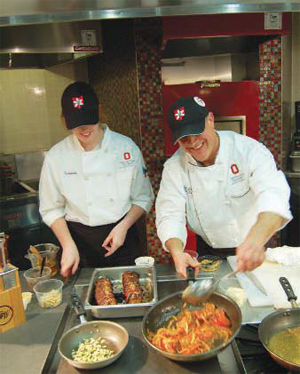 Two chefs show off in the culinary test kitchen at the Ohio Union.

As big as the production facility will be to the future of Ohio State dining services, Ahmed’s greatest impact may come from a shift in philosophy. “Students are our guests and they are a lot more engaged and involved in our decisions,” he explains. “We are a more externally focused culture than before.”

Every three weeks, he meets with a student council of dining service employees who are nominated by their full-time managers and also regularly meets and communicates with the Residents Hall Advisory Council for insight into what the student population thinks about campus dining.

“Those meetings give me a worm’s eye view of workers and students,” Ahmed says.

Feedback from the student council led to a student employee recognition event for top performers, and that led to a similar event for all full-time employees that has become a one-day conference with guest speakers, training and awards.

One of those dining service student council members showed Ahmed is doing more than just that. During a breakfast with five of those student leaders, one spoke up, saying she wished Ahmed wasn’t at the table to hear this:

“This may just be ‘dining services,’ but it’s so much more,” said the senior psychology major, using her hands to signify the quotation marks. “Zia is one of the most inspirational people I’ve ever met and I’ve gotten more out of dining services than any of my classes.”

That is why Ahmed loves his job and why campus dining continues to blossom at Ohio State. 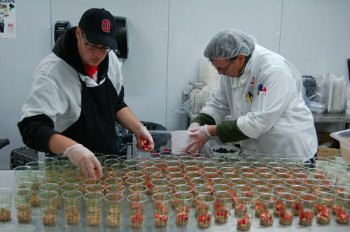 OSUâ€™s Culinary Production Kitchen opened at the beginning of 2014

Ohio State dining has been a work in progress the past decade, but by 2016, campus living and dining will be dramatically different from even now. The university’s Second-Year Transformational Experience Program was created to redefine the student experience and will require second-year students to live on campus. It’s based on surveys that show students living on campus have significantly higher graduation and retention rates and also participate in more on-campus activities.

The $370-million project is underway and the North Campus is being transformed to enhance the student experience. Eleven existing buildings will be demolished and 11 new ones will replace them when all is said and done. Additions to existing residence halls will add 3,200 beds and bring the on-campus resident population to almost 15,000, from 11,400 now, while more than doubling the student population on North Campus.

New dining facilities are being created to feed twice as many students and will open one year ahead of the dorms in Fall 2015. North Campus is currently being served by a Traditions cafeteria, a C-store, Fresh Express (mostly grab and go) and Burritos (fast casual and some groceries), but those will be replaced by the yet-to-be named Building J (a two-story Traditions with 900 seats, a coffee shop and C-store), Building H (another MarketPlace type outlet) and a separate all-glass coffee shop in a high-profile location at a major intersection.

A new recreation center, retail pavilion and green space are also a part of the huge project.