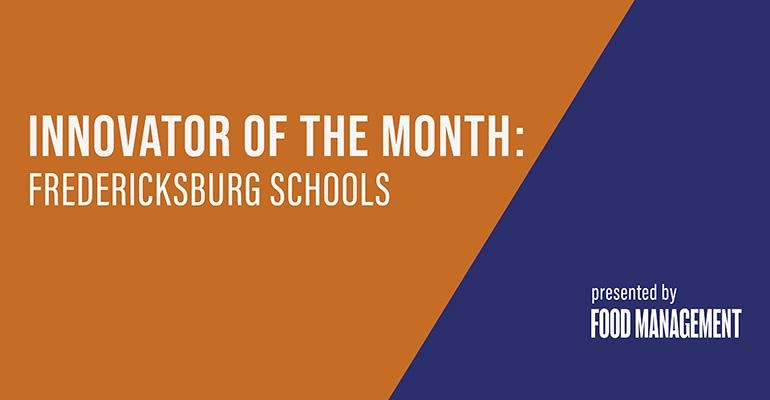 The child nutrition program at Fredericksburg City Public Schools takes getting food to kids wherever they are seriously.
Onsite leaders>FM Innovators

The child nutrition program at Fredericksburg City Public Schools takes getting food to kids wherever they are seriously with a comprehensive mobile meal system that offers multiple daily choices, including hot lunches and reheatable breakfast items.

Mobile meal distribution isn’t unique in the school nutrition world, but few programs are as dedicated to it as the Fredericksburg City Public Schools in Virginia, where Food Services Director Brian Kiernan has been running food trucks to serve summer meals for years. When the COVID-19 pandemic hit a year ago and forced the district to shut school buildings, he ramped up the program to a year-round operation that not only brings food to where kids are but a also tempting variety of it.

That’s because the district’s fleet of three food trucks—and Kiernan is looking to add a fourth—offers a daily choice of half a dozen lunch options complete with all the components required by federal school meal regulations, such as fresh fruit and milk. For a photo gallery of some of the items offered, go here.

The lunches include multiple hot options each day, including not only a daily entrée special such as pasta Alfredo, steamed dumplings with rice or pizza but also hot selections like hot turkey or ham and cheese sandwiches that are part of the everyday menu that also features cold items like low-fat yogurt, a garden or grilled chicken salad or a sunbutter/jelly sandwich. In addition, each month’s menu includes an array of specials such as cheese/vegetable quesadillas, chicken wings and housemade chili/taco salad bowls that the trucks rotate based on demonstrated demand on their particular route.

“For example, if one route has a large request for veggie items, they will offer more,” Kiernan explains, adding that these specials are intended as “a monthly rotation of items for introduction to children to expand their interests in different foods.” 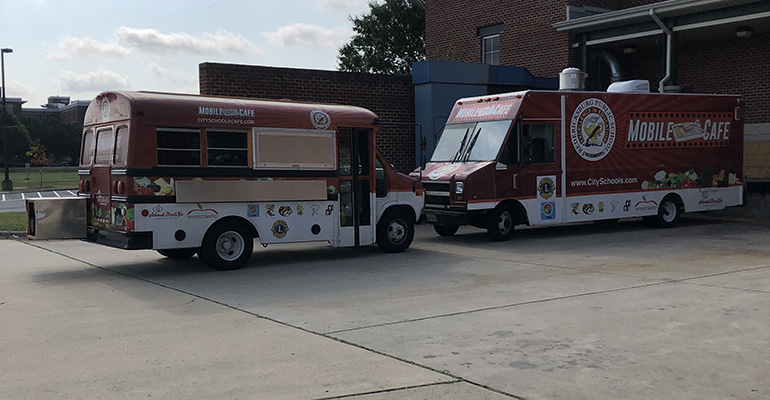 Fredericksburg Schools food trucks are stocked with up to 800 individual meal packs consisting of a variety of breakfast and lunch options, including hot and reheatable choices.

The next day’s breakfast is also dispensed with the lunch each day. These obviously aren’t served hot but in addition to cold selections like yogurt and cereal, they can include breakfast sandwiches, sausage or ham and cheese biscuits/croissants and pancakes that are provided frozen along with reheating instructions.

The Fredericksburg district, covering only about 10.5 square miles and with a total enrollment of around 3,700 students, is somewhat unusual in that its five schools each serve a separate grade level demographic, with one building serving all district K-2 students, another all grade 3-5 students and so forth, “so all the kids go to school together through high school, which is kind of nice,” as Kiernan puts it.

It’s also a high poverty district that already had four of the schools operating meal programs under the Community Eligibility Provision (CEP) waiver—and the high school was added post-COVID as well—so maintaining an effective ongoing school meal program in the face of the pandemic was critical.

Fredericksburg’s summer meal program had already been operating with two vehicles going around the community dispensing meals—and was already planning to add a third for summer 2020—when COVID accelerated things. “The grant money was already lined up and we were getting ready to build it so COVID expedited it a little bit, but it was already on schedule for the summer,” Kiernan explains.

The summer feeding program had already been quite a success, building from just around 7,000 total meals served over an abbreviated period when the mobile program started seven years ago. He launched it, Kiernan says, because he realized that while the district does have robust summer school and enrichment programs where meals are also served, not all district students participate, and many simply can’t get to fixed sites where the meals would be available to them, “so we realized [mobile meal distribution] was needed in our community.”

He is now looking at adding a fourth vehicle because there are still segments of the district “that I’m not really able to get to as closely as I want to,” explaining that subdivision areas definitely fall into this category as to get to kids, “you have to drive through the neighborhood and stop at several different blocks and that’s time-consuming. So extension to another truck is necessary because I don’t want any families to feel like they are being left out.”

With a building engineering background that includes experience with plumbing, electrical and HVAC, Kiernan has an advantage in designing truck retrofits to meet his and his team’s needs. One of the current vehicles was a potato chip truck in a previous life while the other two are former buses.

“I don’t have to pay a company $10,000 to $15,000 to design a truck for me,” he says. “I basically do it myself and then follow all the necessary procedures with the health department, the fire department and all the safety precautions. It’s not just a money saver, but I get to design it the way I feel my staff needs to give the maximum service.” 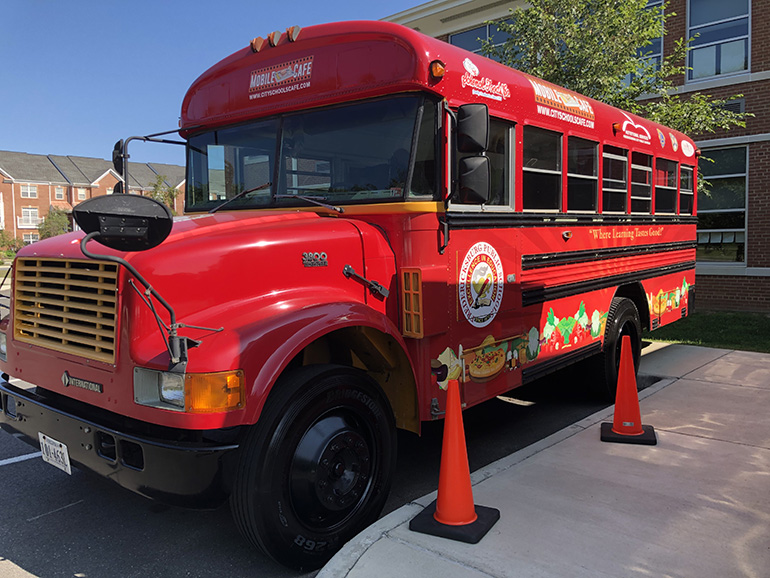 His biggest design challenge is adding a generator that can support the hot and cold holding units. The first truck had been planned to also include some cooking equipment to use in emergencies and potentially in the meal program’s currently suspended catering business, but the meals now are all premade and individually packaged.

Fresh prep and variety are priorities

Many are prepared fresh each day in three district school kitchens from which the three vehicles are deployed. The freshly prepared dishes are supplemented with some premade items like chicken tenders, meatballs and pizza rounds or wedges sourced from manufacturers “because you can’t make pizza for 1,200 kids in a day,” Kiernan quips. “I’d estimate we’re cooking 60% to 75% of our food fresh and supplementing it with high-quality items we buy.”

On average, each truck goes out in the late morning with some combination of 750 to 800 meals to ensure there is enough of everything for everyone who wants it. “They’re packed to the gills because we have to cover the route in that time period,” Kiernan explains. “It’s not like we can go out earlier because no one wants to get lunch at 10 in the morning, and besides, they have virtual classes then.”

Outages of items listed as available on the day’s menu are rare to nonexistent.

“We have this simple but intricate plan that gives us a backup if a truck runs low on something,” Kiernan explains, “because there’s no way we’re ending up at last site with just yogurt or peanut butter sandwiches left—that’s not going to happen. All the kids get the same choice at the end as at the start.”

That restocking safety net requires that if any item is depleted—this is especially likely on all-virtual Wednesdays when everyone is learning from home—a call is sent to the nearest school kitchen, which has extras already on hand, and a vehicle is deployed with the items held securely in a portable hot box to meet the truck with the replenishments.

Because the routes serve kids of all ages, the meals dispensed from the trucks are no different—and no less appealing—than what was served in middle and high schools when they were in session, Kiernan emphasizes, noting that while younger children may not initially go for some relatively more unusual items, the trucks serve a kind of educational function about expanding diets—in fact, the department motto is “Where Learning Tastes Good”—and in any case, with the multiplicity of options, “chances are that they find something they want every day.” 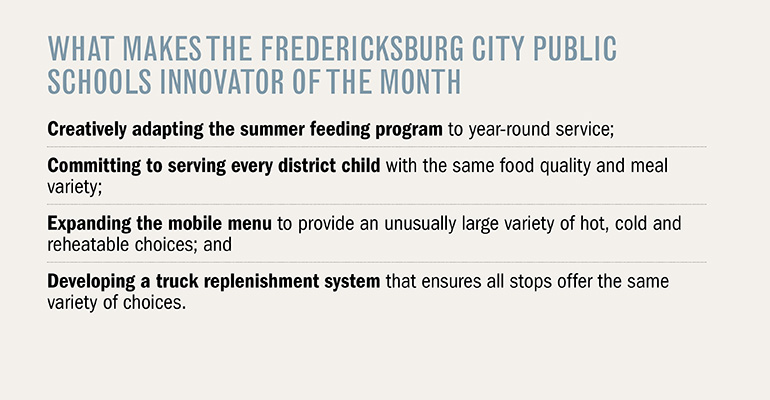 Department managers go out on the truck—and even Kiernan drives one on most days—so they get first-hand experience with learning the preferences and consumption patterns of their route that allow them to calibrate what and how much to stock each day.

“I and my managers all have commercial restaurant backgrounds, so we know how to pay attention to what customers want and give them that,” offers Kiernan, a native New Yorker who began his restaurant career 40 years ago and was introduced to school foodservice in the mid-1990s while also expanding his professional interests and training into building and facility management areas—hence his knowledge of plumbing, electric and HVAC systems. He joined the Fredericksburg system in 2005 and has been its foodservice director since 2007.

Obviously, demand is affected by external factors like the weather, but Kiernan says demand didn’t drop as much as one would think even in the winter cold. The trucks go out every day, rain or shine, with the only exception being during the winter when substantial snow is expected, when the trucks would dispense meals for multiple days to ensure kids get a reliable stock of food.

Otherwise, the trucks each follow a specific route that generally takes  two to 2.5 hours in mid-day and dispenses a lunch and a breakfast for the following morning to each child—Kiernan calls the USDA’s waiver of meal time requirements the most effective of its waivers because it allows him to do this one-stop lunch/breakfast service.

Obviously, despite the meal program’s best efforts, meal counts served off trucks can’t completely duplicate the numbers generated when all kids are in school, but Kiernan estimates he is serving around 65% to 70% of what would be his normal counts, which includes meals dispensed to students taking in-person classes under the district’s hybrid learning model that has about a quarter of the enrollment onsite each Monday, Tuesday, Thursday and Friday (buildings are closed Wednesdays for deep cleaning/sanitizing).

Though no solid determination has yet been made by the district given the fluid nature of the pandemic’s ebb and flow, Kiernan expects the number of students coming to buildings to increase somewhat as the spring term proceeds before its scheduled end in mid to late May.

That will be followed by the summer period when “our summer program no doubt will be much more extensive both in and outside the schools, so we’re not going to stop—in fact, we really haven’t stopped since March 23rd last year.” 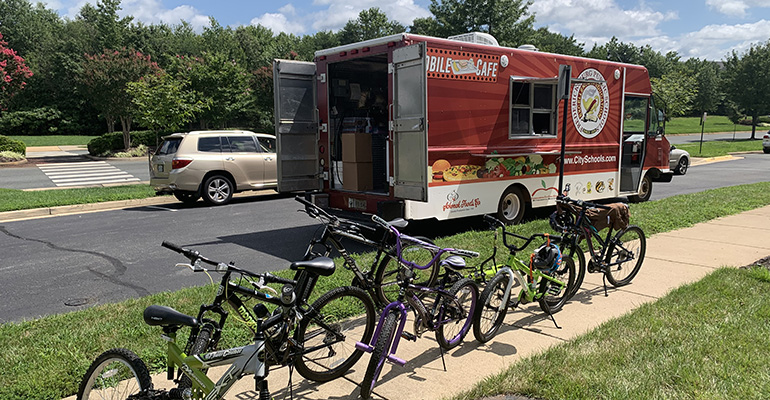 Each truck has a specific route that takes it through designated neighborhoods, so the staff can connect with their “regulars” and learn their preferences.

With the hybrid schedule, the only meal that students consume in school is breakfast, which is eaten in classrooms. Schools let out at mid-day, when middle and high schoolers grab meal packs—the same as the lunch/breakfast combos dispensed by the food trucks—on their way to the buses while elementary school students are given the meal packs before leaving the classroom to forestall any congestion as they leave.

These offerings include the same choices as the trucks provide. In fact, Kiernan offers, the only aspect of the meal program that has suffered in the COVID period—other than the lower meal count numbers—is research and development of new recipes, partly because of time/opportunity constraints caused by pandemic restrictions, and partly because of supply issues.

“We still basically do the same things we’ve always done, it’s just that we don’t get to develop as many fun new recipes, but I think we’ll pick that up again in the summer,” he hopes.