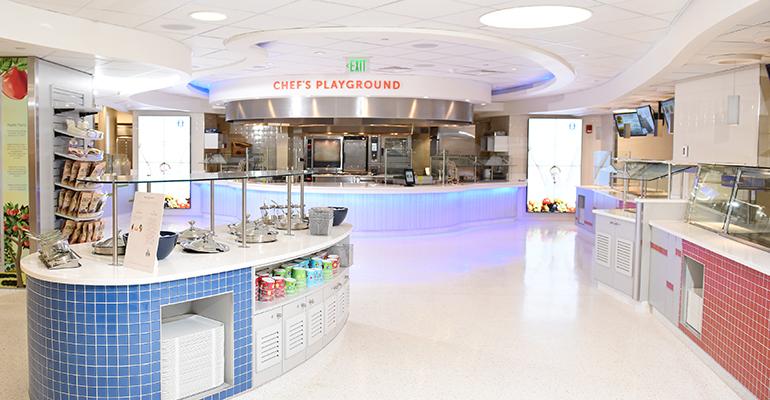 <p>The centerpiece of the new retail food court at Boston Children&rsquo;s Hospital is the Chef&rsquo;s Playground exhibition cooking station, which not only hosts guest chefs but also interactive cooking events with child patients and their parents.</p>
Onsite leaders>FM Innovators

At Boston Children&rsquo;s Hospital, the dining operation aspires to match the institution&rsquo;s lauded clinical side in industry leadership. 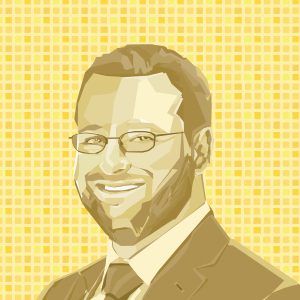 Boston Children’s Hospital (BCH) is ranked No. 1 among children’s hospitals nationally in 10 separate clinical specialties, “but none of them say foodservice,” grouses Shawn Goldrick, the hospital’s patient support services director.

Goldrick is determined to change that, and he’s off to a very good start. Earlier this year BCH took the wraps off an $11 million upgrade of its retail dining operations, a brand-new food court that not only bristles with a mix of high-impact food stations but also serves as an extension of the dining department’s outreach to patients and their families.

That outreach is effected in part by a station called Chef’s Playground, an exhibition cooking platform that wouldn’t look out of place in a Food Network studio. It not only hosts cooking demos by staff and guest chefs but also serves as a culinary playhouse for the young patients and as a sanity break room for their parents through a pair of programs called, respectively, Young Chefs Culinary Academy and Parents Night Out.

The Culinary Academy is an interactive cooking initiative that brings patients together with a staff chef to learn kitchen basics and have fun creating their own concoctions, while Parents Night Out is a complimentary gourmet meal occasion for stressed-out parents spending extended time at BCS with their sick children.

“It’s my role, my job, to provide every level of opportunity we can to engage patients and families and our staff,” Goldrick explains. “Why can’t we use food to engage?”
Why not indeed?

Goldrick describes the approach with the acronym WIN, which stands for Wellness Innovation and Nutrition.

“Wellness means holistic wellness,” he explains. “It’s about taking care of the family unit, caring for the caregivers. What kind of experience are we providing? How do we make people feel better being in our space? 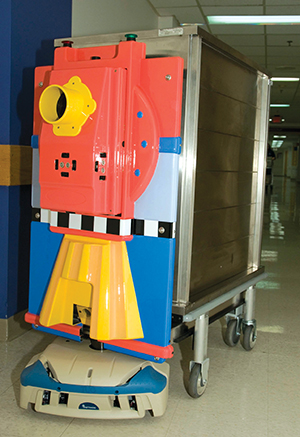 “Innovation means the culture of innovation, always striving to be better, always looking for opportunities to be moving the dial in our operation on how we educate customers or find the right products.

“Nutrition is the sustenance: what are we offering people at our hospital brand and why should they be eating here?

Even before the opening of the food court, BCH’s dining department was already making progress on these goals, repeatedly going the extra mile to provide the facility’s young patients with foods they like. Executive Chef Colin Targett has been a frequent visitor to the patient floors to talk with the kids and their parents about preparing some favorite dishes.

Meanwhile, Parents Night Out had already been in place for over a year, set in a little-used conference room that is redecorated to resemble a nice restaurant. The Chef’s Playground venue is an upgrade that adds an interactive element with a chef who cooks the meal, talks about it and engages the guests, who sit either at stools around the station or at elevated tables that offer easy sightlines—“it’s basically Emeril Live,” quips Goldrick.

Chef’s Playground and Guilt Free Grill, another dining concept developed by the BCH culinary team in conjunction with dining partner Sodexo, are models for concepts designed for potential export to other healthcare institutions.

“I think these brands would resonate at other hospitals,” Goldrick offers, though he admits that initiative is still in its exploratory stages and how, when and under what arrangements those brands might be deployed to other institutions is still very much up in the air.

What isn’t debatable is that BCS is both a busy place and a high-stress one. The dining operation offers room service-style dining from 7 a.m. to 7 p.m. daily, but the reality is that despite all the facility’s 400 licensed beds being occupied pretty much all the time, the kitchen only serves about 150 meaparentsls at an average meal period because many patients are simply too ill to eat regular meals. “We have kids of the highest acuity here,” Goldrick says.

By contrast, the retail operations generate around 4,500 transactions daily (it was 3,500 before the renovation), 3,000 during the lunch daypart alone. The new food court, which opened at the end of June, boasts the Chef’s Playground station as its centerpiece. Here, diners can see either a staff chef or a guest from an area commercial restaurant preparing special meals of the day.

There is, for example, a quarter-pound burger available, but it uses grass-fed beef sourced from a farm (New England Farms) in nearby Vermont. It is hormone- and antibiotic-free, as are about 80 percent of all the proteins served in either the retail or patient dining operations, per Healthy Hospital Initiative standards BCS has committed to. That includes all the chicken, especially the some 35,000 pounds of that perennial kid-favorite, chicken tenders, that are served annually.

The food court also has branded Subway and Salad Creations stations and a unit of the regionally famous pizza concept Regina Pizza, which was substituted in for the national pizza chain brand originally envisioned for that space. Outside the entrance is a Starbucks, and along the corridor leading to the food court is a Red Mango. (There is also an Au Bon Pain unit on the premises that is managed by the hospital’s real estate unit, not patient services.)

The national brands are courtesy of corporate relationships developed by Sodexo, which also had a significant hand in the food court renovation through its HMC design arm. Sodexo also did all the background checks and administrative work needed to secure the Regina Pizza unit but, the dining operations are staffed by BCS employees overseen by Goldrick in conjunction with Paul O’Connor, Sodexo’s project manager at BCS.

Unlike at many hospitals it operates, Sodexo’s role at BCS is as to serve as consultant and administrative support services provider rather than as the day-to-day manager of operations typically the case at most contracted facilities. However, Goldrick says he has a strong relationship with the company, his former employer with whom he served for 14 years (the last five at BCS) before taking on his current role in 2010, citing the contributions Sodexo made to the successful food court redesign.

That project involved a multitude of challenges, financial, structural, operational and philosophical.

“We were asked to maximize the financial impact and needed to find creative ways to do that while getting the same physical space as before,” Goldrick explains. One of those creative solutions involved a certain branded coffee franchise unit, which replaced some of the seating area. “Seats don’t generate revenue,” Goldrick notes, “so we took some out and put in a Starbucks that now gives us $1.2 million in sales.”

One architectural change that was a clear advantage to the in-house dining team was that the hospital had renovated its lobby around the same time the food court underwent its own transformation, and that upgrade streamlined access to the food court from the hospital entrance. 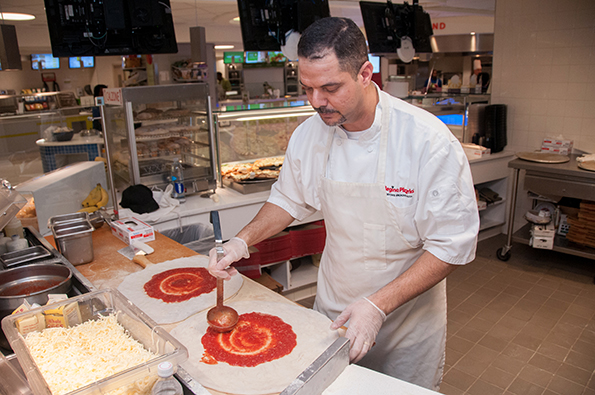 Whereas before customers had to navigate a couple of staircases (and pass around the very prominent Au Bon Pain unit off the lobby), there is now a clear pathway from the lobby, from the Red Mango unit that stands off the lobby clear through to the main collection of food stations.

But before everything could even be put in place, there was another dilemma: What do you do while the construction is going on?

“The original plan was to create a temporary servery with grill, deli and so forth inside the construction space for nine months, but we decided that was not desirable,” Goldrick recalls. “So we went back to the general contractor and said, ‘Let’s find another way.’ Well, it turns out there was a section of seating off the backside of the space that we could take out and put in a grab and go with no seating and no HVAC that would save three months and $750,000 in construction costs. We said, ‘Deal!’ The challenge was the small space. We put in hand-tossed salads, a panini station and standard beverages and coffee, but we knew that wasn’t going to last six months. So we took some of the construction savings and spent $160,000 on a food truck.”

The truck offered a hot meal option in a conveniently located shuttle/drop-off area over the time of the renovation. Now that that’s done, it will serve as a mobile Chef’s Playground for chef demos at community centers starting this spring.

The food court renovation also posed a significant strategic challenge: What would the priority be?

“Organizationally, we had a lot of discussions around the food court because we’re asked to do many things,” Goldrick recalls. “It was an $11 million capital investment, so we have to look at ROI, but we’re also a hospital and there’s a school of thought that if you’re a hospital you should promote wellness in your food operations. But there was also a need to drive sales and make the eating area an oasis for families and patients. So there are a lot of priorities.”

To sort out those priorities, the dining team—with administrative approval, of course—deferred to customers, who after all have their own mixed set of priorities balancing health, economics and flavor appeal.

“Our foundation was, we’re going to build this based on choice,” Goldrick says. “So for example, the Subway we put in was for our employees, who love its price point—everybody knows the $5 sub—but it also meets some wellness goals. For instance, they have the unlimited vegetables you can load up your sub with. They also have affiliations with diabetic organizations, the American Heart Association and a kids wellness menu built around milk and apples.”

Plus, the Subway option was already a reality, whatever BCH decided: “We had a lot of employees going outside the food court, going across the street and getting it anyway,” Goldrick says. “So we said, ‘Hey, we’ll bring them in so at least they can come to our food court if they want Subway!’ But then we also wanted to be able to provide another level of options with Guilt Free Grill and Chef’s Playground. Those are the hospital brands, what a hospital should be about. We want to get the person who’s coming to Subway, we want them to walk by Subway and say, ‘Wait a minute, what do they have going on at Chef’s Playground today—maybe that’s where I want to eat.’”

The food court renovation may be done but things are hardly at a standstill. BCS is currently planning on adding a new 200-bed tower, slated to open in five years. Goldrick is already looking forward to the possibilities that will present as it will include a new kitchen.

Goldrick well knows that opportunities to plan and build a new production center in a hospital environment don’t come along very often, so the pressure’s on to get it right.

“We will need to build the kitchen of future there,” he says. “It will be the patient feeding kitchen and need to figure out in next six months what that will be because we want to be the drivers, the pioneers. We want to define what patient feeding is, what retail operations should look like and we’ve got to get it right because it won’t happen again.”