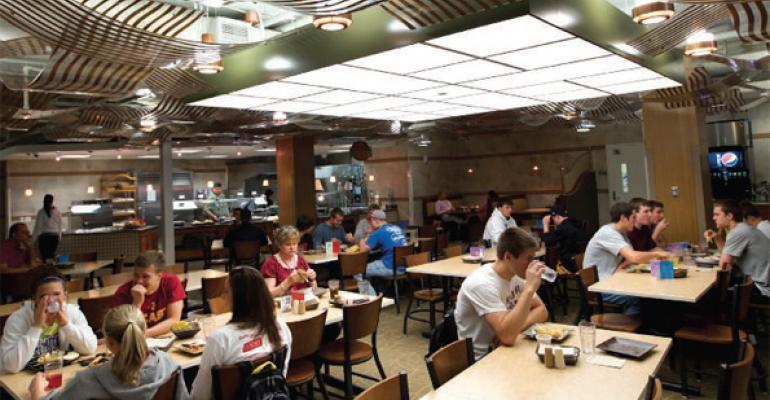 How ISU Got Its Groove Back

Six years ago, Iowa State Dining was at&nbsp; a crossroads&mdash;no permanent director, outdated facilities, jumbled financials. But look at it now. RELATED: How ISU Dining Works with the Campus Community A Look at ISU&#39;s Meal Bundles 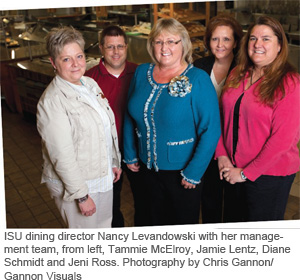 Nancy Levandowski is a California girl but now also an Iowa icon. As director of dining services at Iowa State University for the past five-plus years, she led the ISU Dining Team in the rebuilding of a program that was underperforming financially and growing increasingly disconnected from the expectations of students. When she was hired back in late 2006, ISU Dining had been without a director for well over a year and faced an uncertain operating future.

Today’s numbers testify to the good judgment the school showed in hiring Levandowski to lead its turnaround. Since her arrival in Ames, she has overseen a 50%+ increase in dining department revenues, from $25 million to nearly $40 million. That’s based not on simple price increases but on an explosion in voluntary meal plan sales (from less than 600 when she took over, to around 3,500 today) driven by a new meal plan approach and splashy new venues that have helped almost triple retail sales from around $5.6 million to nearly $14 million. Also contributing to the bottom line is a growing catering operation that now realizes around $4 million in annual sales.

Further, Levandowski has overseen a literal reinvention of dining at ISU as her tenure has coincided with major renovations—over $20 million worth—of most of the school’s dining venues, which now consist of three residential dining halls and 14 retail outlets.

When she was hired after a career that included stints with several major contract management companies as well as in self-operated college dining services all along the West Coast, ISU was already well into an extended initiative to integrate its historically separate retail and residential dining operations (until 2002, they were parts of two distinct departments).  Many of the dining venues were outdated, and what retail there was failed to attract much business from school’s huge off-campus student population.

“The world had changed and ISU Dining had not,” Levandowski says. “The dining hall menus were very traditional and repetitive, while retail was not really addressing student needs as we recognize them today.”

Her mandate was to modernize the facilities and offerings and grow student participation while disciplining the financials (at the time, there was only a single P&L for a department; it is now tracked by each operating unit).

ISU had proposals to renovate its two most antiquated dining halls on the table. A third, Union Drive Marketplace, had been built back in 2003 and was the star of the campus dining environment with attractive features like a modern Mongolian grill and a pizza oven.
“We proceeded with looking at drawings, working with the architects, talking about the vision of what should it really look like,” Levandowski says. “We also toured other campuses to get ideas.”

Those tours looked at both peer institutions in the Midwest and schools as far away as California. They also included cutting edge commercial operations like In-N-Out Burger, Whole Foods and Disneyland (the latter for its precision catering operation).

“Sometimes it’s better for us foodies to experience things: to touch, feel and of course taste rather than just look at pictures,” Levandowski explains. The group's observations were combined with market research data from the campus community to arrive at a vision of both residential and retail dining on the ISU campus.

The two renovated dining centers opened in back to back years: the newly renamed Seasons Marketplace debuted in fall 2009 by Bethany Landon and her team sporting a smoked meats station, a wood grill, an international station and an Italian station with a stone hearth oven among its prominent features.

Conversations Dining followed a year later with a New York style deli, a high-end grill and a cook-to-order specialty food station called Creations that offers everything from sweet and savory crepes and quesadillas to chipotle pulled pork and gourmet mac and cheese.

The expanded, fresh-food-oriented venues also helped boost the school’s chef staffing from two to eight and contributed to a major expansion in local product purchasing, which swelled from around $30,000 to over $1.2 million today. 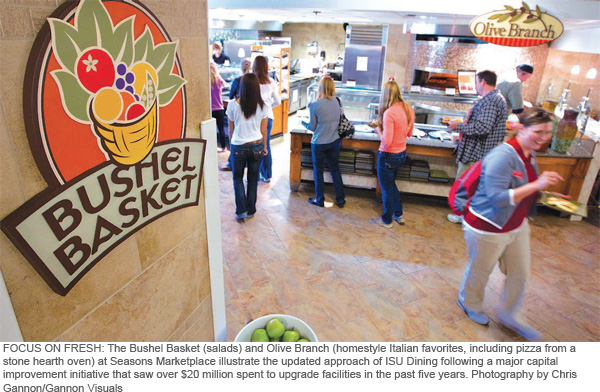 Attention to the Retails

The renovated residential dining halls certainly helped sell more voluntary meal plans, but ISU’s explosion of revenues in the past six years was turbocharged by the growth in retail sales. That was driven by substantial investments in new and modernized retail facilities placed at key intercept points around campus, and also by a revamped meal plan that added a meal bundle component incorporating purchases at retail outlets (see sidebar at right).

The centerpiece of retail foodservice on the ISU campus has traditionally been the food court in the Memorial Union, with its mix of largely nationally branded concepts (Subway, Panda Express, Sunset Strips), along with the popular Fresh Burrito Works make-you-own-burrito/quesadilla station. One of Levandowski’s first retail renovations following her arrival with Retail Director Kristi Patel targeted this high-traffic venue by adding two in-house concepts to the mix—Cys & Fries, offering made to order fresh never frozen quarter-pound Angus beef burgers, and World Bistro, featuring a revolving menu of international cuisine choices.

The new, expanded Union food court debuted in fall 2007 and was followed a year later in the same complex by a new combined MU Market & Café. This replaced older separate café and c-store outlets and was placed in a new 2,000-sq.ft. space next to the bookstore in a new wing of the Union building. It offers a mix of specialty hot and cold beverages, smoothies, sweets, grab-and-go salads/sandwiches/sides and a variety of organic and international convenience foods ranging from snacks to frozen meals.

Another major new retail project involved the Hub by Angie Witt, a former railway waiting room for the train connection to the town of Ames and located in the heart of the campus, it traditionally offered only vending options with a small window for commissary foods. Today, the vending remains, but Levandowski also added foodservice: the Hub Grill & Cafe offering hot and cold sandwiches, salads, soups and desserts, plus the first branded Caribou Coffee outlet in Ames (and only the second on a college campus at the time).

The renovated Hub/Caribou debuted in Spring 2008 and now generates nearly $1.35 million in combined sales (compared to under $300,000 in the vending-only days). Together with the Bookends Café in the adjacent Parks Library, this area of the campus—rich in commuter traffic as it is near most of the academic buildings—drives over $2 million in retail sales.

The most recent major new addition to the retail mix is the renovated Hawthorn Market & Café by Tatiana Twedt in the Frederiksen Court Community Center, an apartment complex located slightly distant from the main campus and designed to function as a more or less self-contained community. Unveiled last summer, the renovated Hawthorn added ordering kiosks outside its servery to facilitate flow-through, minimize congestion and add convenience. The upgraded menu includes a new pizza concept, toasted subs, Starbucks branded drinks and a once-thru-the-line full service meal option at dinner. All the changes have added up to a nearly 50% increase in sales, to over $1.7 million.

Adding to the high-powered retail mix on the ISU campus are two recently re-opened c-stores serving largely residential populations: the South Side Market and the newly renovated East Side Market. Featuring a Godfather’s Express Pizza outlet and made-to-order deli, East Side Market has helped double retail sales in the MWL Commons, generating over $1.6 million in the just completed academic year. In fact, since 2007, overall c-store sales at ISU have doubled to over $6 million.

The most recent additions are an expanded café in the Gerdin Business Building, and Froots, a smoothie concept, in the newly renovated State Gym recreation center led by Dan Fincham.

More changes and additions are on the horizon. ISU's enrollment is growing—it is expected to hit 31,000 this fall, up from 28,000 a year ago, and the president set goals for 34,000 in the next two years. That means more opportunities—and need—for dining outlets. One, the Global Café, is scheduled to open in the 2013-14 school year in the College of Agriculture.

“It will be like what you see in some airports, where the coolers of sandwiches, salads and beverages and racks of dry goods offerings are lined up against the wall with a cashier at the end,” Levandowski explains.

In the meantime, she is looking to bridge the gap with what is currently the trendiest of food delivery systems. “Because the crunch will come before we can get all these places we’re planning built, I’m looking at using food trucks because they would give us flexibility,” Levandowski says. The exact number is yet to be determined, as is whether they will be purchased outright or leased.