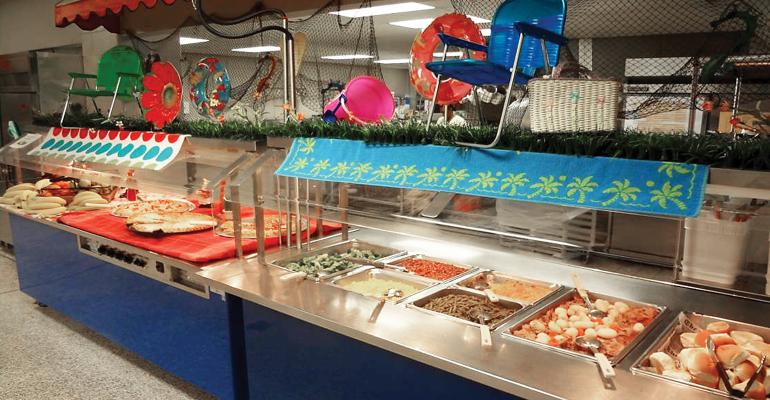 Gwinnett County Public Schools
Gwinnett cafeterias offer an array of lunch options, from three entrées in K-6 to half a dozen or more in the high schools.
Onsite leaders>FM Innovators

A creative test kitchen concept that leverages site-level expertise is the most recent innovation at this fast-growing district.

Gwinnett County, located in the Atlanta metro region, has one of the country’s largest public school districts, with an enrollment of some 178,000. Like any endeavor with such a large scattering of onsite points of service, fast-growing Gwinnett—the district currently adds 3,000 to 4,000 students annually to its enrollment—is challenged with remaining both efficient and responsive across its 133 points of service, which (with one exception) all operate their own meal production in their own onsite kitchens.

One creative strategy the district recently developed is a concept called the IDEA (Innovation/Development/Excellence/Achievement) Centers, which are functioning Gwinnett school meal sites of varying sizes across all grade levels that have been tasked with serving as test kitchens to develop best practices in specific areas or for specific products.

Because the IDEA Centers are functioning school meal kitchens, the protocols and practices they develop have an authority in the eyes of peers that is sometimes missing from the kind of top-down mandates traditionally issued from central offices, and therefore, hopefully, are more likely to be fully embraced. The IDEA Centers have already had some success in improving Gwinnett’s pizza program and developing smoothie programs for breakfast and lunch.

In addition to its IDEA Centers, Gwinnett’s school meal program is also extremely proactive in honing its offerings to emphasize the most popular dishes in order to maximize participation. That is critical in a district where almost half of the student body is composed of paid customers. 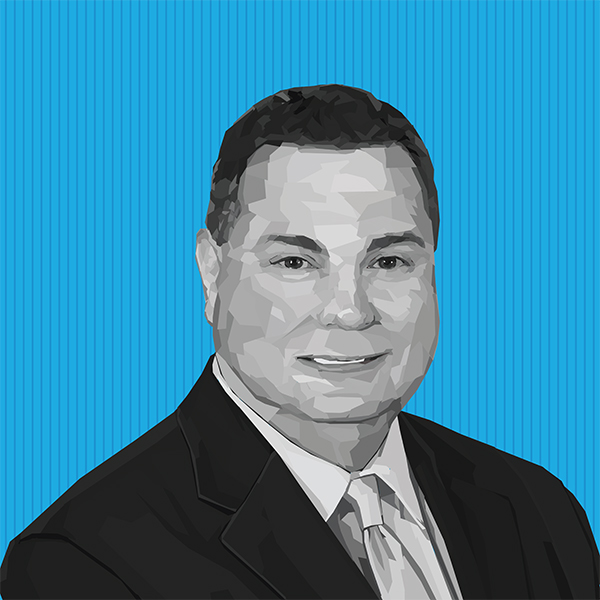 The notion of IDEA Centers started with the concept of test kitchens, says Ken Yant, Gwinnett’s school nutrition program director. “We think of ourselves as a retail [entity],” he explains, “so we have to look at it from that vein. We need test kitchens because we need to test products more thoroughly before we roll them out ‘chain wide,’ you might say, to our 132 school sites.”

Going further, Yant decided that it wasn’t just products but processes—handling, packaging, presentation, production—that needed to be put under the test kitchen microscope. That’s when the idea of using his best-performing sites as test kitchens first occurred.

“We really need to look at it from the back door to the tray [instead of] just focusing on the production aspect of a particular product,” Yant explains. “Because you can buy the best quality product, but if it doesn’t hit the line in the manner it was supposed to be prepared, it’s not going to matter. So we thought, we need to go back to basics, to focus on food quality, on food presentation and on making sure it is handled properly from the time it comes in the door to the time it hits the tray.”

Nine schools were chosen in early 2016 to serve as IDEA Centers. Among them were representatives from elementary, middle and high school sites of varying onsite student population sizes, from as little as 500 to as many as 3,500, in order to ensure that the protocols they develop would be relevant to as many sites as possible.

“We wanted a great mix so that we can handle all the what-abouts and the what-ifs before we actually implemented,” Yant says.

“So the managers at the Idea Centers are leading that, working with their teams to put things through the grind, to maybe see things we don’t see because a lot of upper level managers may see things top down, but may not have an idea of the unit-level impact because they don’t work in a kitchen, so we’re developing that unit level testing to build some credibility. That was the genesis of the thinking behind the IDEA Centers,” Yant says.

Once the IDEA Centers finish developing their protocols, their managers are sent out to teach their peers about what they developed in real-world school kitchens under real-world circumstances “so they can truly say they have the same issues as those they are talking to and addressed and solved them,” Yant observes. “This way, people are not being talked down to.”

The first product tested by the IDEA Centers was a pizza recently commissioned from a supplier. 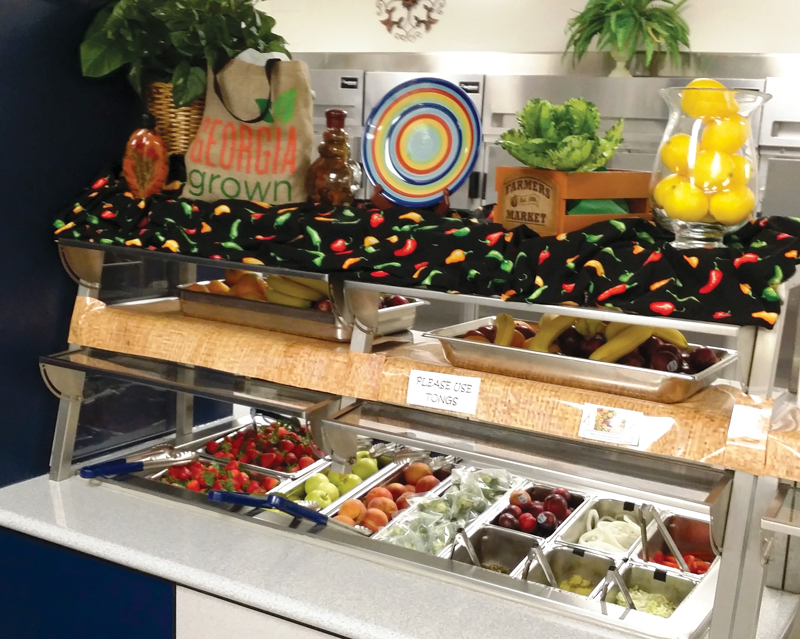 The Gwinnett menu is honed down to emphasize the most popular kinds of choices but that doesn’t mean unhealthy like this local produce bar illustrates. Photo: Gwinnett County Public Schools

“Obviously pizza is a high-volume product, one of our largest sellers, which demands a lot of real estate, so we wanted to make sure we got it right,” Yant explains.

That “handling it right” includes such mundane factors as how the product is stored once received (for example, if placed improperly on its side, the toppings tend to fall off) as well as considerations like the baking process, the presentation and so forth.

The IDEA Center sites put the product through its paces, developing a set of procedures to ensure that when that pizza hit the serving line, it would be in optimum condition.

The results? “We’re definitely serving more pizza and it’s a much better product now that were actually properly handling it, and smoothies are flying off the shelf, especially at the elementaries,” Yant reports.

As for how the program will function going forward, Yant intends to remain flexible.

“When we get to the end of this year we’ll look at designating IDEA Center schools as an open-ended competitive process where schools will have to apply” for the designation, he offers. “Obviously they’ll have to get their principal’s support because [hosting an IDEA Center] sometimes involves the manager being out of the building.” But “we do want to make it a competitive process as we only have nine [slots currently]. That may change eventually depending on the depth and quality of the applicants we get,” he says. 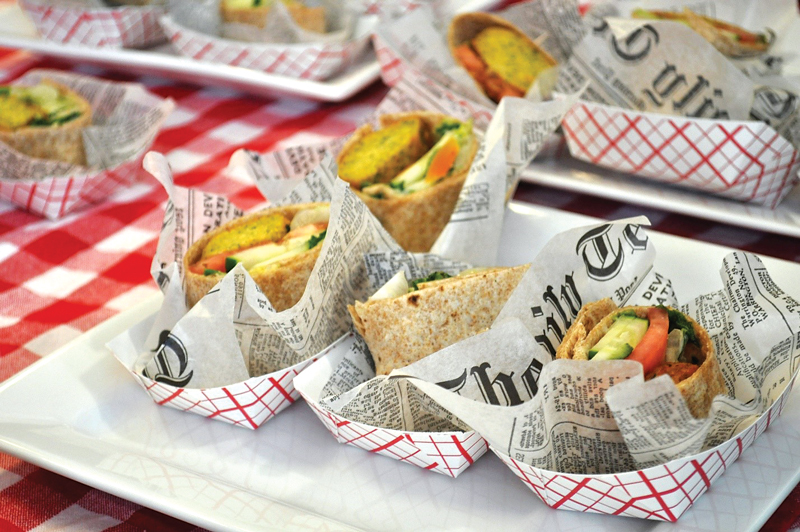 There’s no question the program has made an impact, especially on selling individual sites on systemwide initiatives.

“We certainly have gotten positive feedback, especially from managers,” Yant says. Previously, when the department wanted to introduce something new, “we’d just send out an email saying ‘here’s a new product order from your distributor and here’s the recipe number’ and then we would move on to something else. We’ve slowed down now and they have kind of noticed that we’re a little more deliberate in how we roll something out, how we try to do our diligence and address all the particular issues that may come up” with the introduction.

Another key component of the Gwinnett school meal program is Yant’s determination to hone his menus to a point where the selections broadly appeal to students and can be produced efficiently. A big part of this is the sectioning of the offerings by popularity into Tier 1 (most popular), Tier 2 (somewhat popular) and Tier 3 (not very popular) groupings.

“We have evaluated our menu and gotten rid of a lot of low-hanging fruit, a lot of Tier 3 items while some Tier 1 and 2s we’ll serve even more often,” he says. “We’ve trying to focus on quality, not quantity and give students the favorites that they want.”

Pruning lower selling dishes also has operational benefits as eliminating them also eliminates the labor cost of producing them, which can then be reallocated to something with more sales appeal.

Another imperative is reducing SKUs and cross-utilizing those that remain as much as possible to maximize procurement.

Despite all this, Gwinnett school cafeterias retain plenty of choice: three daily entrée choices in the elementary sites, up to five in the middle schools and more at the high schools, where they are supplemented with items like subs, salads, wraps and burgers and pizza that are always available.