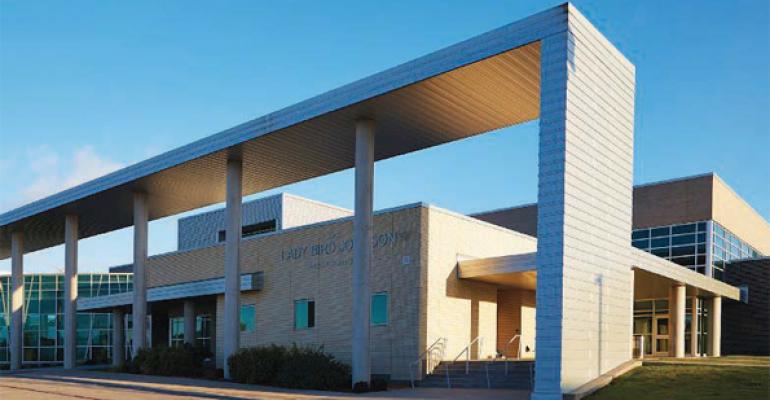 At Irving ISD, the separation between the back and front of the house is being breached, school by school. &bull; GALLERY: K-12 Innovator of the Year: Irving ISD Schools 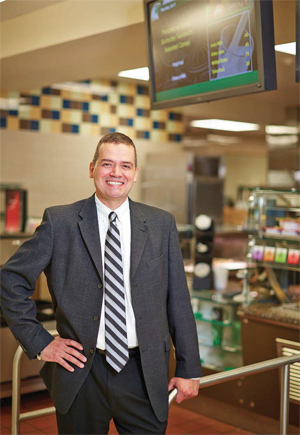 Irving ISD Foodservice Director Michael Rosenberger, MBA, is committed to changing the way food is prepared and served in the district.

Michael Rosenberger is a man with a vision when it comes to his job. Director of Food Service for the Irving (TX) ISD, he is overseeing a total overhaul of the way meals are served in the 35,000-student district southwest of Dallas.

“Traditionally, as at many schools, we made the food in the back in the kitchen out of sight of the kids and then brought it out to be served,” he says. “I want to take that wall between the back- and front-of-the-house down and I want the food to go directly from the oven to the serving line with no separation.”

After all, it’s what kids see every day in the commercial restaurant world, from the custom-assembly model of quick-serve chains like Chipotle and Subway to the open kitchens now prevalent even in upper tier restaurants.

To that end, Rosenberger has led a comprehensive renovation program at Irving ISD that is slowly transforming kitchen and servery layouts to make them more open, efficient and responsive. To date, eight sites have been completed while others have been partially modified while awaiting full renovation. 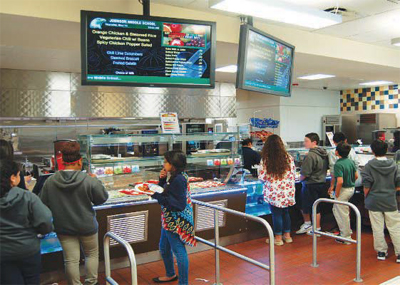 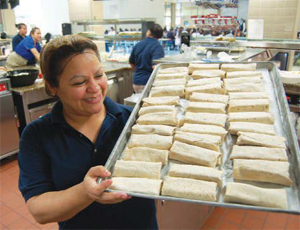 Bringing production to the front also makes service easier by facilitating replenishment, and it allows staffing to be utilized much more efficiently.  Instead of servers calling back for restocks or production staff guessing because they can’t see what’s moving up front, serving bins are replenished quickly.

Rosenberger compares it to a Just In Time (JIT) factory production approach, where components are delivered to the factory floor just as they are needed so nothing sits around. In factories that costs money, while in school foodservice that costs customer satisfaction as well as productivity.

Why do school lunch lines stop or slow down? Reasons range from operational issues like insufficient staff readiness and product shortages/outages to student indecision, fumbling with cash, forgotten IDs and the taking of incomplete meals.

While kids will always be kids, Rosenberger says many of these issues can be addressed with improved processes driven by better kitchen/servery design and modern equipment.

“Technology has made a dinosaur of the traditional two-person serving line,” he explains. “Now, one employee can do both jobs as long as the back-of-the-house supports them.” Hence, servers stay at the stations.

“We deploy runners who keep each line replenished directly from equipment just behind the service area so customers see that everything coming out has been freshly made. There is nothing appearing from the back kitchen areas.”

As a consequence of these changes, food cost dropped from 42% to 37% at one renovated site, and from 33% to 28% at another. The latter was also able to save nearly $30,000 in labor through staff reductions even as it expanded serving lines from two to five. (Reduced staff is generally reassigned in lieu of new hires, resulting in overall district labor savings.)

In fact, the renovated kitchen/servery layout has been so successful that it has cut 15 minutes from the elementary school lunch schedule (and 10 from middle schools). “You can bet that the school administrations and teachers were happy to get the extra time for education activities,” Rosenberger says.

Rosenberger’s goal is to convert all schools to the new model, but it will take time and money. In the meantime, he is filling the gap with equipment upgrades. For instance, all schools will be equipped with induction cooktops by next year.

Rosenberger is a big believer in what he terms transformative technologies such as combi ovens, pressure cooker braising pans (Irving ISD prepares a fabulous charro bean dish using dry beans in only about an hour thanks to pressure-cooking technology), induction cooktops, on-demand hot water dispensers and video menu boards. 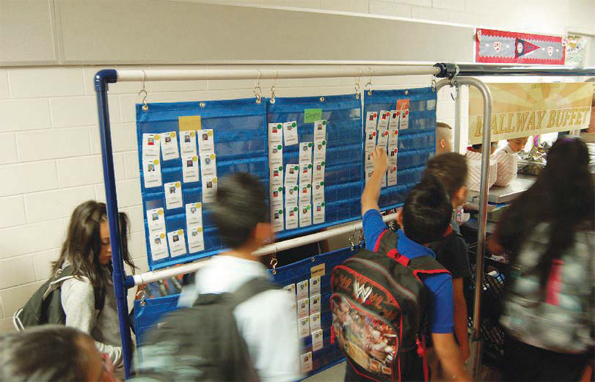 Students take their ID cards, then get their breakfasts. 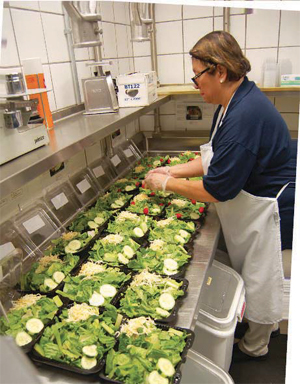 “I firmly believe in buying the best possible equipment,” he says.

It’s All in the Cards

One of Irving ISD’s simplest but most effective innovations has been a breakfast cart program. Its brilliance lies in its low-tech approach.

Irving had been using the breakfast-in-the-classroom (BIC) model to try to provide morning meals for students, but the program had significant drawbacks in labor usage, operational inefficiency and teacher cooperation.

The Buffet is simply a low-tech trolley cart with upper and lower shelves that has been retrofitted with an extension from which hang simple plastic pocket folders. These folders contain individual student ID cards with pictures and bar codes arranged by homeroom and alphabetized by last name.

As students approach the cart they take their cards from the folder, then proceed to pick up preportioned breakfast components. At the other end of the cart, they drop their cards into a basket and take their meals to their classrooms to eat.

At the end of the serving period, the dining staff simply scans all the cards dropped into the basket to document the meals served.

The carts are easily stocked in the cafeteria before being rolled out and generally need no replenishment while deployed. There is less setup required because instead of packing a box for each classroom and delivering it to each, the cart services a number of classrooms, deploying at high traffic points to intercept young customers as they head for their homerooms in the morning.

The advantages include giving students more choices as the cart can offer several alternatives (a staffer watches to ensure everyone takes one qualified breakfast meal) while teachers no longer have to bother with documenting breakfasts served, as they must with a traditional BIC program.

Meanwhile, Food & Nutrition Services is able to comply with federal regulations about documentation easily and it deals with fewer sanitation issues.

The use of the low-tech card sleeves and the basket collection also eliminates the need for an expensive new POS component on the carts, vastly reducing their cost (in fact, the ones used so far were already on hand).

It will also allow Irving ISD to comply efficiently with the new fruit requirement this fall.

“We will also be able to bridge the waste gap because we’ll be able to do offer versus serve,” FSD Michael Rosenberger says.

The carts were piloted at six elementary schools this past year and will be in all 20 this fall.